Hydropower from dams has brought electricity — and development — to far-flung places around the world. But dams have a dark side, upending water supplies and species where they have been built.

A new policy paper published in the journal Science spotlights what is perhaps the most controversial source of renewable energy, calling for more holistic planning for hydropower projects to minimize their impacts on the environment.

Dr. Leonardo Saenz, Conservation International’s director of eco-hydrology and one of the paper’s more than 40 contributors, explains how dams can pose threats to people and nature — and how to make them more sustainable.

Question: How did this paper come about?

Answer: Damming of rivers began in the mid-19th century, yet more than 150 years later, we still don’t know the most effective and sustainable way to go about it.

As the global population — and demand for electricity — grows, governments and companies worldwide are looking for new ways to provide for expanding cities. As a result, there has been a surge in dam proposal and construction in places like the Congo River, the Amazon and the Mekong delta.

These are the most biodiverse freshwater systems on Earth: 2,300 species of fish live in the Amazon, 1,200 in the Congo, almost 1,000 in the Mekong. These numbers include some truly emblematic species: arapaima of the Amazon, the giant catfish of the Mekong and the giant tigerfish of the Congo.

Although these rivers have long provided water, fish and other resources for millions of people, only now have plans to tap their potential as a source of power been prioritized — despite the fact that the remoteness of these sites calls the proposed dams’ cost-effectiveness and environmental impacts into question. There is an urgent need for the conservation community to broadcast the value of protecting these systems before it’s too late.

Q: How would you respond to people who say power generation must take precedence over protecting ecosystems?

A: We all know that humans cannot live more than a few days without water. In major dammed rivers such as the Colorado River, the Indus, the Rio Grande, we have seen that some people downstream don’t have water to drink because those rivers are running dry. So while generating electricity is important, we must balance this need with those of both the downstream communities and nature as a whole, including deltas and the marine ecosystems that have been affected by diminishing fresh water and sediments emptying into the ocean.

One important note is that most of the electricity resulting from these big dam projects is not enjoyed by those people who live nearby. Instead, it provides for people thousands of kilometers away, as well as industries like the mining sector. While recognizing that private sector development is important, we need to also make sure that people understand where their electricity and water is coming from and take responsibility for its use. 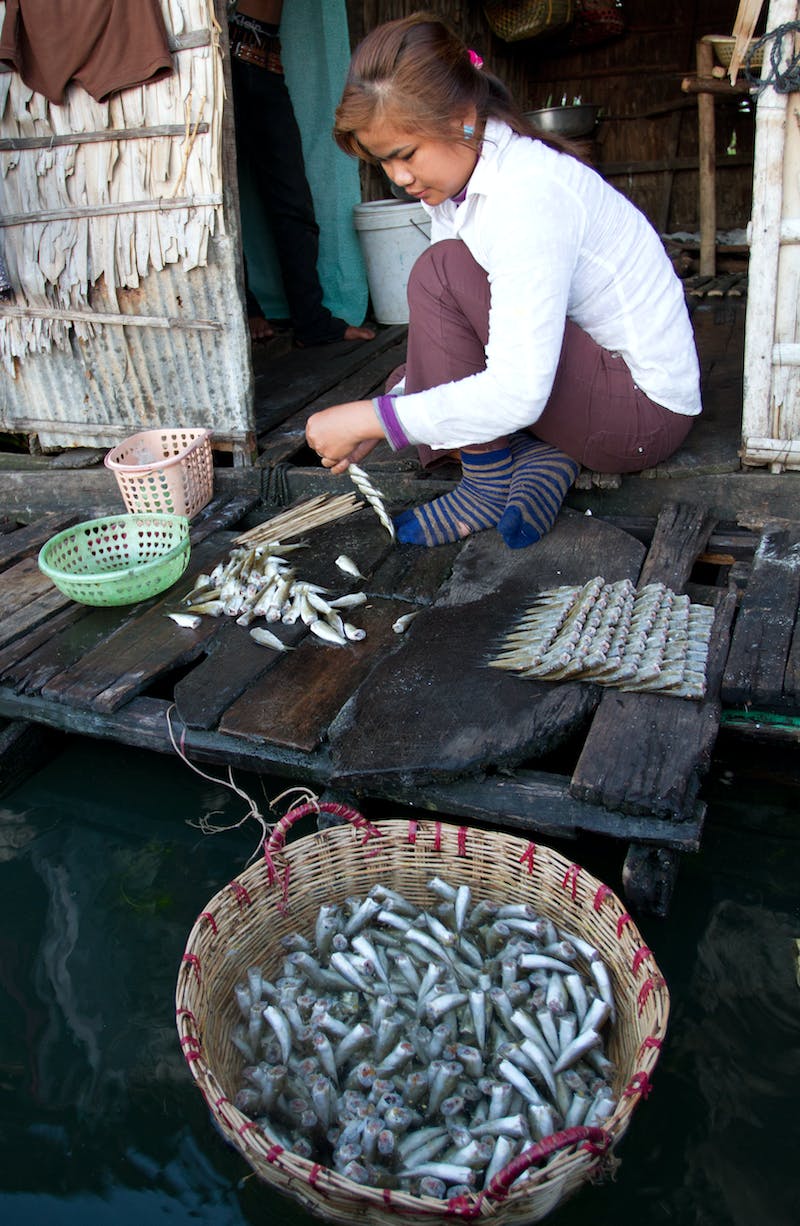 A woman cleans and prepares small fish to be smoked in a floating village on Tonle Sap Lake, Cambodia. A growing number of dams being built on the Mekong River could post a serious threat to the food security of millions of people who depend on Tonle Sap and the Mekong for their main source of protein. (© Kristin Harrison & Jeremy Ginsberg)

In India’s Jaipur district west of New Delhi, for instance, there’s a big issue with groundwater scarcity, because it’s a dry place. Research has shown that the people who build their own wells ration the water better than those who get their water from channels and irrigation systems. The latter group doesn’t know where the water is coming from, whereas the people with their own wells know how much water they have and how long it might last.

In addition, there can be unforeseen consequences to damming one part of a river without thinking about the larger system. For example, millions of people living in Cambodia depend on fish in Tonle Sap Lake, which is connected to the Mekong by the Tonle Sap River. If we continue to dam the river, we will affect the natural process that ensures the productivity of the fishery. And if that productivity falls, there will be a significant impact on nutrition of these people who depend on those fish for protein. If the fish disappear, then people will look for alternative sources of protein, which could result in more local land converted into animal pasture or even expensive imports from other countries. And ramping up agriculture could in turn exacerbate the pressure on already-limited freshwater resources and result in large-scale deforestation, thus further warming our climate.

Q: What were the study’s main findings, and what are your main recommendations for dam construction moving forward?

A: Building on the earlier creation of a world database of dams, in which scientists mapped about 40,000 existing dams across the planet, for this paper we used remote sensing and sophisticated ecosystem modelling to continue to chart how dam development is evolving.

Our new research has shed light on the sheer number of dams that have been proposed on the Congo, Amazon and Mekong rivers: at least 450. It has also underscored the importance of thinking about dam development on a larger scale.

Historically, dam environment impact assessments have been done at the site scale — one dam at a time. In rivers like the Colorado or the Rio Grande in the U.S., multiple dams were developed in the same river without strategic planning that considered how damming one part of the river affected another, which is one reason these rivers are now running dry.

To prevent this situation repeating itself, we have two main recommendations.

First, scientists must conduct more research at the river basin scale to determine the tipping points beyond which fish species could become extinct, sending millions of people into starvation. Research like this is currently being done by a Belmont Forum/National Science Foundation team led by CI’s Lee Hannah in the lower part of the Mekong River. Only by providing robust evidence-based scientific insights do we have a chance at ensuring the survival of the species and the continued provision of the freshwater services upon which biodiversity as well as communities depend.

Second, we must figure out how best to apply this research toward cumulative dam impact assessments. These assessments almost always focus on specific elements of the system that might be most in distress: migratory fish species, indigenous populations who may be affected, forests that are heavily fragmented. Those elements need to be explored all together.

When regulators and developers start a hydropower project today, it should have the right tools, data, information and expertise to predict what the impacts — good and bad — will be 10 years, 25 years or 50 years from now. This will allow them to determine whether it is viable for the project to go forward.

In developing countries, these large energy projects depend on loans. If these loans are associated with high financial, social and environmental risk, the lenders may deter from making the loans or will make them more expensive for those countries. Similarly, if you are a developer of the project, your project might incur higher cost because you have to develop stronger safeguards or higher compensations that you weren’t expecting because of the damage caused by an earlier project.

Q: How should these findings shape how we think about water?

A: The thing that concerns me is that because in many countries drinking water is subsidized through massive infrastructural systems, we are so disconnected from those freshwater sources that we take it for granted; we don’t care where it’s from because it’s so cheap and from so far away. I hope this paper provides useful information to support good policy decisions regarding dam development, but I also hope it can encourage people to get a better understanding of where their water and power comes from and to inspire them to help the many species that inhabit these iconic river systems and keep them healthy.

Cover image: The Addala Dam in the Philippines was put in place to supply irrigation to farms. Perhaps the most controversial of renewable energy sources, hydropower can have large environmental and social impacts if not developed sustainably. (© Conservation International/photo by Lynn Tang)