Bracing for the biggest El Niño on record: How climate change is upping the ante

From Rolling Stone to Grist to The New York Times, it’s been all over the news in recent weeks: One of the strongest El Niños in history could be brewing in the Pacific. After the big El Niño of 1997–98 killed as many as 2,100 people and caused more than US$ 33 billion in property damage worldwide, many people are now starting to worry about what the coming “Godzilla El Niño” may leave in its wake.

El Niño suppresses the normal upwelling of cold water off the Pacific coast of the Americas, which carries with it vital nutrients that support plankton and fish species, kelp forests and sea mammals such as seals and sea lions. There’s still some question as to whether the trade winds will die down, causing El Niño to intensify later this year, but warmer waters in the Pacific have already begun to take a toll on marine life.

In California, fish have responded to the warmer temperatures by migrating north or out to sea in search of cooler waters. As a result, sea lions that feed on those fish have had to venture further from their young to look for food. As of August, nearly 1,200 sea lions — mostly starving sea lion pups — had been rescued by The Marine Mammal Center, based in Sausalito.

El Niño is also expected to bring a warm, wet winter to drought-stricken California. While this water is much needed in the parched region, the intense storms previously experienced during El Niño years could also be catastrophic for the coastal environment.

The problem, according to Emily Pidgeon, senior director of strategic marine initiatives at CI, is that, “during these massive rainfall events, all the fertilizers, pesticides and other kinds of pollution that accumulate in the soil will wash down into Monterey Bay in one big slug. Additionally, large amounts of fresh water rushing into the bay can be detrimental to some ecosystems, including the kelp forests off the coast, which support many other species.”

Now, to make matters worse, some scientists are saying that climate change may cause more frequent — and more intense — El Niños, making it harder for plants and animals, and the ecosystems they live in, to recover.

According to Lee Hannah, senior scientist for climate change biology at CI, El Niños are, in fact, getting more intense. “We had some intense events in the late 1990s, and it looks like we may be headed for some more. Whether that’s an enduring pattern or not, we’ll only know with the passage of decades, but the prudent thing to do would be to take some action now — including getting greenhouse gases under control — that will help lessen the blow.”

It’s important to remember that El Niño itself is not climate change. It’s a natural cycle that the Earth’s ecosystems are adapted to coping with every 7–10 years. In fact, according to Pidgeon, El Niño can actually help strengthen ecosystems.

“If you can imagine, it’s like the flu coming through a population. You may get the flu every winter, but you then have the whole rest of the year to recover. It’s just part of the natural cycle of life. You can think of El Niño as a natural impact like that.”

The problem is: What happens if climate change does intensify El Niño events and cause them to come more frequently?

“With climate change impacts, the ecosystem may not have sufficient time to recover before El Niño strikes again. Whereas the previous, natural cycle helped build the resilience of the system stronger, now we’re weakening the system by having it occur more often than the system has evolved to cope with.”

Take what happened to marine iguanas in the Galápagos Islands during the notable El Niño event of 1982–83. Sea level rise washed away the green and red algae the iguanas normally feed on, causing a severe decline in the population as many faced starvation. The seaweed Bifurcaria galapagensis, once widespread in the Galápagos, was hit even harder during the same event and is now presumed to be extinct — showing that a big El Niño can wipe out even a common species if it’s vulnerable. The iguana population has since recovered — but if climate change impacts compound the next El Niño, will it be able to do so again? 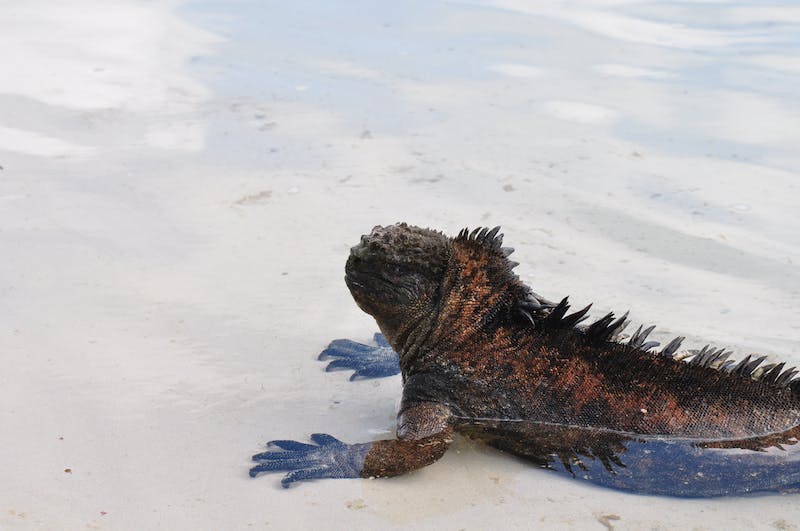 Marine iguana on the shore of Santa Cruz Island, Galápagos. these unique lizards experienced severe population declines during the 1982-83 El Niño; they have since recovered. (© Conservation International/photo by Bailey Evans)

This all speaks to how important good management is now. Ridge-to-reef conservation and coastal management have become even more important, and adaptive management strategies — such as fishing restrictions, tourism regulations, rules for shipping and agriculture — taken together can lessen stress on the overall system, allowing it to better respond to a strong El Niño year.

Protected areas help keep pressure off vulnerable areas and allow recovery. Both commercial and non-commercial species need special monitoring attention as a strong El Niño unfolds. If signs of population crashes are seen, then the areas where species still exist need to be protected. For instance, in the Galápagos, according to Hannah, “corals were getting hit hard and dying back. Some of the last holdout populations were in the outlying islands at tourist destinations. The recommendation was to protect those areas by limiting dives and preventing anchor damage in those last populations.”

CI is working to create more resilient ecosystems all along the Americas, including strengthening fisheries management and supporting small-scale fisheries in the Pacific waters off Costa Rica, Panama, Colombia and Ecuador.

“We think the problem is too big and what we do doesn’t matter,” says Hannah, “but it actually does. Climate change is happening on such a massive scale and over such a long timeframe that it’s difficult for people to connect what’s happening to individual actions — like jumping in the car to run to the store — but that’s exactly what it is.”

El Nino is expected to peak in the late fall or early winter. But for three nights starting August 31st, you can tune in to “Big Blue Live” on PBS to see firsthand how some of the species in Monterey Bay are faring so far. Co-hosted by my colleague Dr. M. Sanjayan, this live television event will spotlight a place touted as one of the successful ecosystem recoveries in recent decades. What better place to teach us a thing or two about resilience?

Sarah Hauck is a writer for CI. Tune in to “Big Blue Live” starting August 31st at 8 p.m. EST/PST on PBS (for other time zones, check your local listings).

Sign up for email updates. Donate to Conservation International.