But one place in the middle of the Pacific emerged mostly unscathed: Hawai‘i.

This time around, as one of the strongest El Niños on record continues to intensify in the Pacific, it’s a different story.

“We are definitely in uncharted waters,” said Dr. Jamison Gove, a coastal oceanographer for the National Oceanic and Atmospheric Administration (NOAA). “As this very strong El Niño takes hold in the Pacific, the island state braces for a record coral bleaching event. It has warmed ocean temperatures in Hawai‘i to well beyond anything we’ve observed in quite some time.”

The black line indicates weekly sea surface temperature in western Hawai‘i. The spike in 2015 shows waters reaching above 29 degrees Celsius, or around 84 degrees Fahrenheit — well above the average for the past 30 years, depicted by the red line. (Credit: NOAA Coral Reef Watch)

One of the first victims of the record high ocean temperatures is the state’s treasured coral reefs, victim to a massive worldwide coral bleaching event now under way.

“We have this big, hot blob of water, and we expect this to perhaps be the worst bleaching event we’ve seen in some time — perhaps in recorded history,” said Dr. Jack Kittinger, director of Conservation International (CI) Hawai‘i.

The state’s coral reefs have mostly dodged the devastating effects of bleaching events that hit other regions of the world.

“But this event is shaping up to be more widespread than anything we ​have observed in the past,” Gove said.

The arrival of warmer seas is not the only culprit for the bleaching, however — a combination of locally specific threats have made Hawai‘i’s reefs more vulnerable.

According to Kittinger, three key stressors are at play. First, coastal development and changes in land use have increased the amount of sediment, nutrients and other pollutants that run off onto the reefs — pollution that can reduce coral’s ability to cope with rising sea temperatures.

Second, overfishing disrupts the intricate balance of the coral reef ecosystem. For example, removing too many herbivorous fish that graze on algae can cause the seaweed to run rampant and take over the reef — smothering coral, and reducing the health of the habitat.

Third, while coral depend on certain algae for food, invasive species of algae have “gone bonkers,” Kittinger said, growing out of control. They compete with native algae, smothering and killing reefs, blanketing native fish habitats and preventing new corals from attaching to the reef. 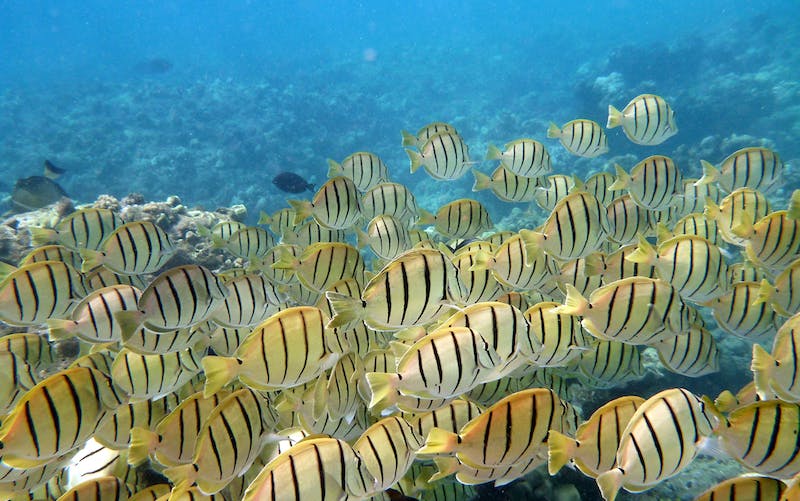 School of manini swimming off the coast of Oahu. A popular fish in Hawaiian cuisine, this species depends on coral reefs for survival. The healthier reef fish populations are, the more resilient reefs will be to threats like coral bleaching. (© Frazer McGilvray)

In response to these stressors, reefs can “tip” into a degraded state that may be difficult to reverse.

“Those stresses are growing with coastal population, and the cumulative effect is pushing reefs close to a tipping point,” explained Dr. Carrie Kappel, an associate project scientist at the University of California Santa Barbara and contributor to Ocean Tipping Points, a marine science and policy think tank.

“Even without this bleaching event, some of Hawai‘i’s reefs had already ‘tipped’ into a less desirable state, with few live corals, lots of seaweed and few fish,” Kappel explained. “We need to reduce the other stresses on these reefs so they can be resilient to future climate change.”

“We have to get a handle on our local stressors or there won’t be reefs around for climate change to kill,” he said. “That’s the bottom line.”

A 2013 study provided a similarly dire forecast: Using global climate models from the Intergovernmental Panel on Climate Change, a paper published last year in Global Change Biology estimated that Hawai‘i could experience severe annual bleaching by the middle of the century.

“Given how infrequently we’ve experienced these types of coral bleaching events to date, that’s a very alarming prediction for the future health of our coral reefs,” Gove said.

This global problem will require local solutions for reefs to survive. “Local protection coupled with more serious efforts to reduce carbon dioxide emissions are needed if we want coral reefs to be part of our future,” Nancy Knowlton of the Smithsonian Institution told the Washington Post earlier this month.

To that end, CI and a network of partner organizations are getting to work.

In early October, Eyes of the Reef, a community reporting network for Hawai‘i’s coral reefs, hosted an event dubbed “Bleachapalooza,” in which citizen scientists reported widespread bleaching — including bleaching of smooth coral, usually the most resistant to it. The information will be shared with the state’s Department of Land and Natural Resources (DLNR) to inform reef management.

DLNR also joined with CI Hawai‘i to launch a Community Fisheries Enforcement Unit — three Division of Conservation and Resources Enforcement officers in a vessel donated by CI — to enforce fishing regulations in the waters off the island of Maui. Since its first patrol in 2013, the unit has led to a 90% compliance rate with fishing laws, a small step toward reducing overfishing and increasing the resilience of coral. Better enforcement means better compliance, which keeps reef fish populations healthy, ensuring the viability of the reef.

Will local efforts like these add up to a brighter future for Hawai‘i’s coral reefs?

“Places that have successfully weathered severe bleaching events in the past are the places that have strong management, enabling these ecosystems to bounce back,” Kittinger said.

“We are building the partnerships necessary to help Hawai‘i’s reefs — and the communities they support — be resilient to a changing climate.”