Behind an island landslide, a degraded forest

Editor’s note: Conservation News is exploring the complexities of living in, using and protecting one of the planet’s most valuable types of ecosystems — tropical forests — in a series we’re calling “No forest, no future.”

On November 22, 2016, a few weeks before New Caledonia’s rainy season normally begins, a night of unceasing rainfall in the island territory’s Néaoua Valley caused the greatest flood in human memory and numerous landslides that brought the earth crashing down on the 300 residents of two tribes in the community of Houailou. As the waters rose and hill slopes simultaneously collapsed, 70 houses were flooded and another 12 were buried or destroyed. Eight people disappeared, and the community found itself facing US$ 2 million in damages.

“The flood came up from the valley floor to my house so fast that I knew right away I couldn’t save anything; I only had time to run away,” said Kiki Marara from the Kamoui tribe. Maxime Poedi from the neighboring Goareu tribe added, “Within minutes after the flood hit my house, I heard a very loud noise, like an aircraft taking off — a wave of trees and rocks rushed down the mountain on the side of the valley. My brother’s house was eventually destroyed by this mixture of water, mud, wood and huge rocks the size of cars. We lost two people and are still missing two.”

What caused this devastating event? While several factors appear to have contributed to the damage, including increasingly extreme weather, poor planning and sheer bad luck, the role of ecosystem degradation and forest loss must not be overlooked.

An island of trees

Forests retain soil and keep rivers and fringing reefs clean. They protect the coastline, serving as a barrier against erosion and a buffer from natural disasters such as cyclones and tsunamis. They also provide habitat for a variety of marine and terrestrial species; for example, the roots of mangrove trees often act as fish nurseries. Forests trap and store carbon, helping mitigate some of the climate change impacts (like more frequent and intense storms) that island nations are particularly vulnerable to. And they soak up and store the fresh water on which most life depends. 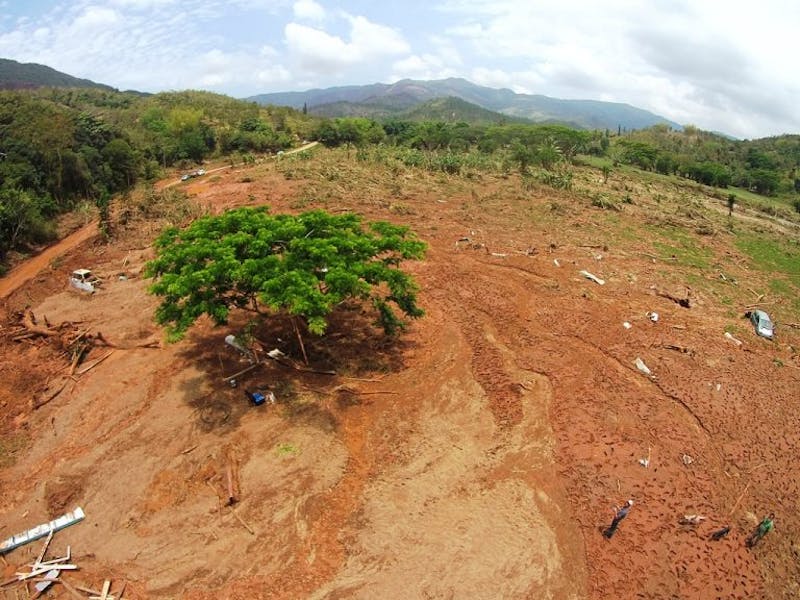 A view of the damage caused by flooding and landslides in New Caledonia’s Néaoua Valley. (© Conservation International/photo by François Tron)

What caused the disaster?

At the request of the mayor of Houailou, Conservation International (CI) New Caledonia undertook an independent rapid assessment of the factors that contributed to the November flood and landslides, paying particular attention to the potential contribution of nearby hydroelectric dams and mining operations.

Through interviews, inspection of the landslides’ aftermath, measurements of high-water marks and drone footage, together with the contribution of data provided by the meteorological and water agencies and the hydropower company, CI’s team has identified several factors that appear to have exacerbated the impacts on the landscape and community: 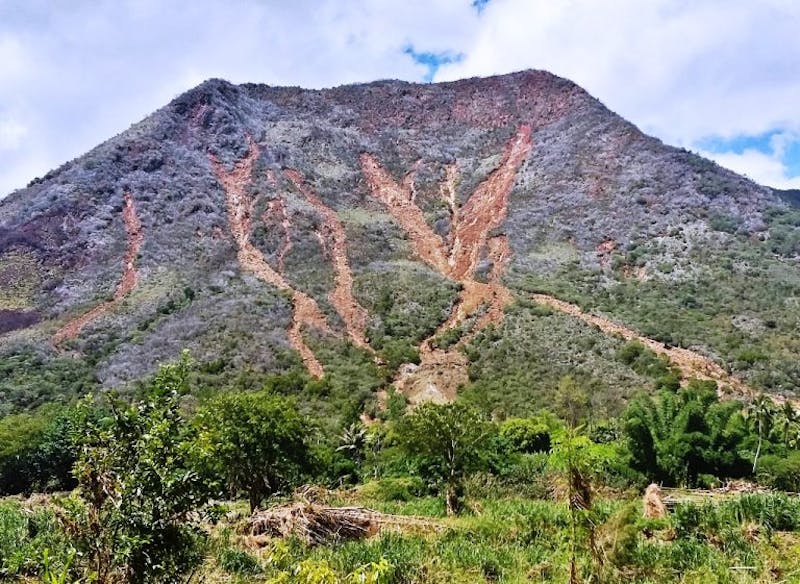 The landslides carved multiple paths of destruction through the forest. CI New Caledonia performed a rapid assessment to understand the causes of the natural disaster. (© Conservation International/photo by François Tron)

The next storm on the horizon

The Néaoua Valley flood would likely have been more contained and less damaging if the area’s vegetation, including forests, wasn’t degraded. Degraded ecosystems are less able to provide protection and benefits for the communities and landscapes nearby.

We suggested the mayor and other stakeholders involved follow these key steps:

Community involvement in the conservation of New Caledonia’s forests is key to building their resilience to climate change, as these “once-in-a-lifetime” floods and other natural disasters will become more frequent. The storms may continue, but if we start now, we’ll be more ready for the next one.

Cover image: New Caledonia’s “Coeur de Voh” is a heart-shaped patch of vegetation in Voh commune in the Northern Province of the island. (©cachou44/istockphoto)