Before and after: In four short years, new forest takes root

As a freelance photographer, I’ve shot everything from Tibetan wheat farmers to reproductive health clinics in the jungles of the Democratic Republic of Congo. I’ve become skilled at capturing a “day in the life” of many of my subjects, but it’s rare that I get the chance to go back and discover what happened to them after I caught them on film.

In 2012, I spent two days on my first Conservation International (CI) assignment, photographing the Green Wall project in the Gunung Gede-Pangrango National Park, about two hours’ drive from the Indonesian capital, Jakarta. When I returned four years later for another assignment, I was struck by what had changed — and what had stayed the same.

Decades of deforestation fueled by logging and agricultural expansion has shrunk Indonesia’s forests to a fraction of their former size; in recent years Indonesia overtook Brazil as the country with the world’s highest deforestation rate.

CI started the Green Wall reforestation project in 2008 to protect the water reservoir that sustains local communities and rare species — and provides drinking water for the more than 30 million people in greater Jakarta. In partnership with local farmers and the national park service, since 2008 CI has planted more than 120,000 native tree seedlings to build a “green wall” that can help prevent erosion, absorb carbon from the atmosphere and provide other benefits for nearby communities.

By the end of my 2012 trip, I felt I understood the value of this work; it was not until I returned this year, however, that I fully grasped the positive impact the project is having on the forest and communities.

Reaching for the sky

2012: While walking to meet a local farmer, we stumbled upon a tree that had been planted in 2008. I liked the light and I wanted scale, so I asked CI team members Abduh and Dede to pose with the tree that they had helped plant. 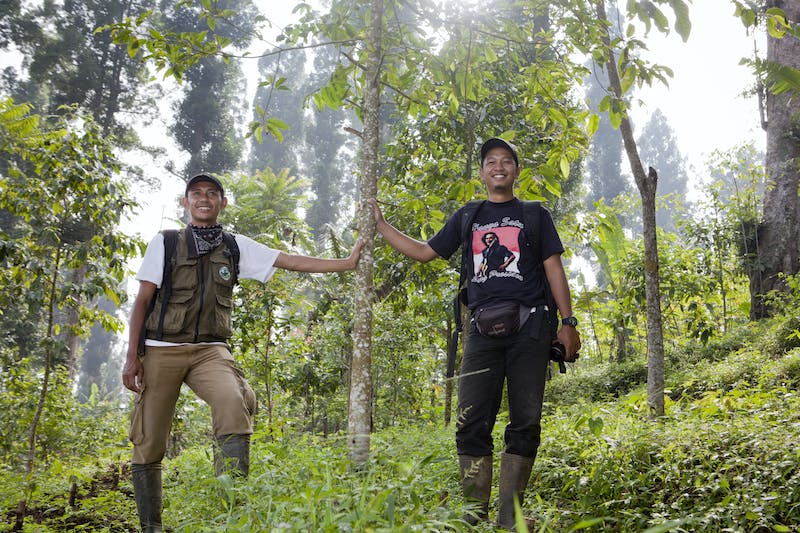 2016: Somehow we managed to find this tree again! I was amazed by its growth; the surrounding forest was also more lush, with the area around the tree starting to fill with vegetation. 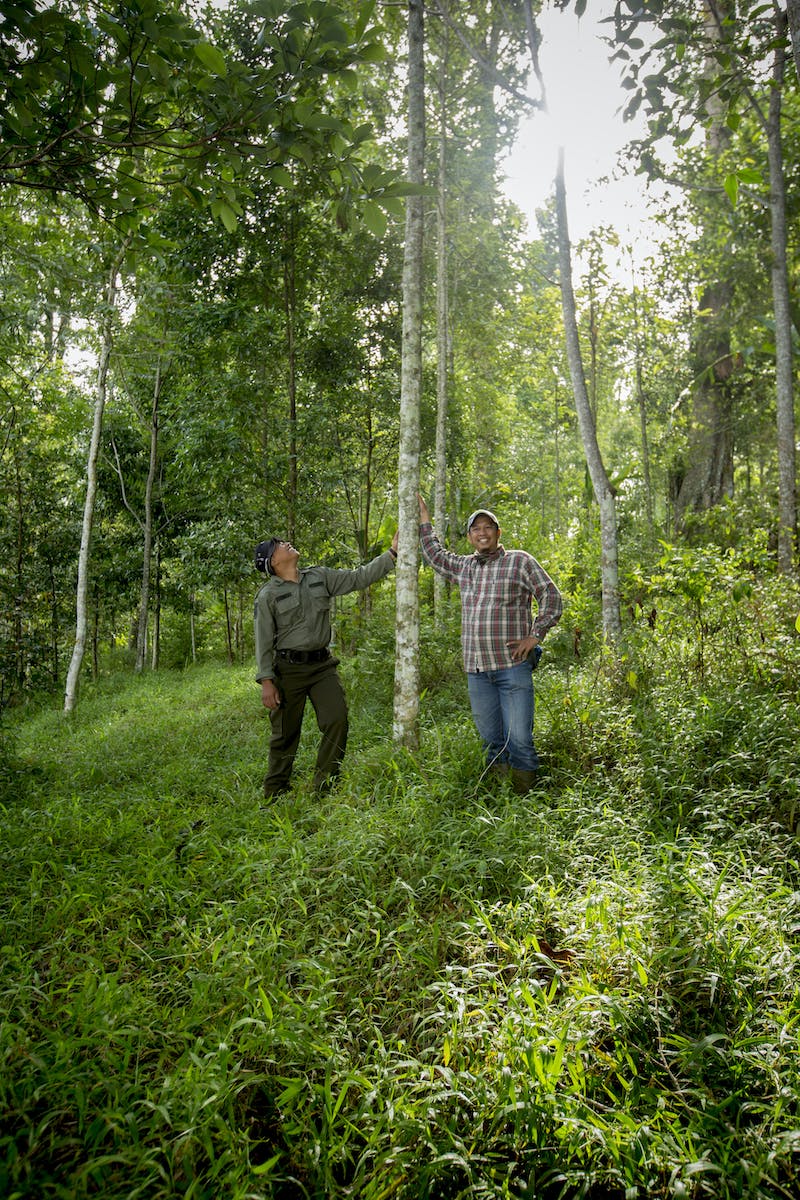 A wall of green

2012: CI had just planted small tree seedlings — barely visible in my photo — between the larger trees. In fact, there were no trees here before CI began planting them in 2008. 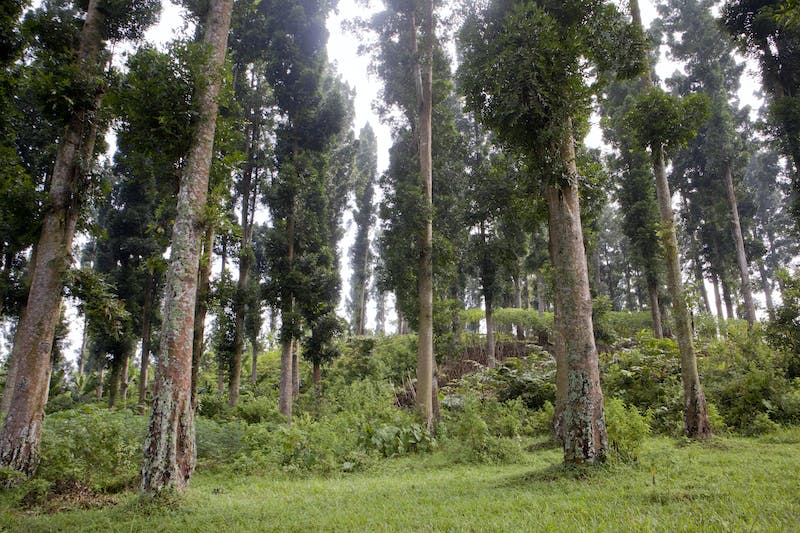 2016: Now when you walk into the national park, there is a wall of green that separates the national forest from private land. The once-seedlings are growing and quickly filling in the space. I added my guide, Igud, for scale so if I go back in 2020 we can assess the change. 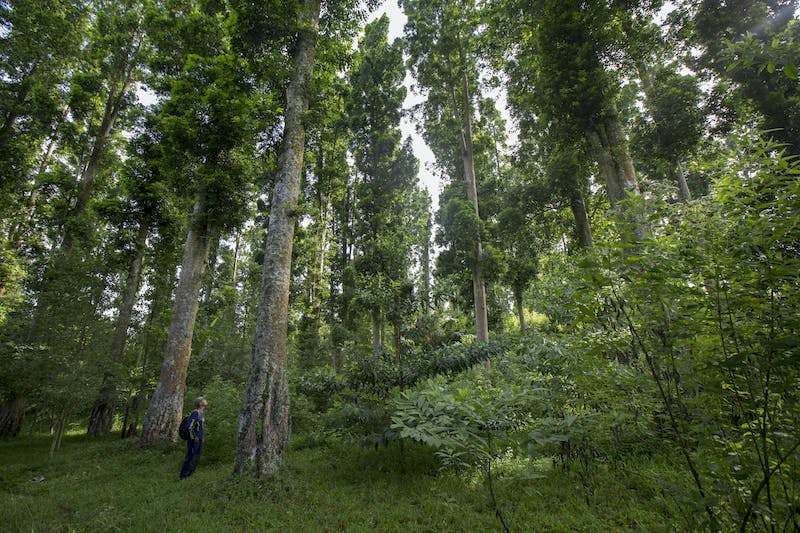 2012: Kardi is a farmer who grows cassava on national forest land in order to make a living. He is aware that farming within the national forest is illegal, but he needs to support his wife, children and grandchildren and he cannot currently afford private land. After planting seedlings on the land Kardi is farming, CI’s team began providing transitional support to Kardi and other farmers through an economic stimulus project. This project provides goats that farmers can sell them for meat and milk and reduce their dependence on growing crops. Kardi was one of the first people to sign up for this stimulus project. 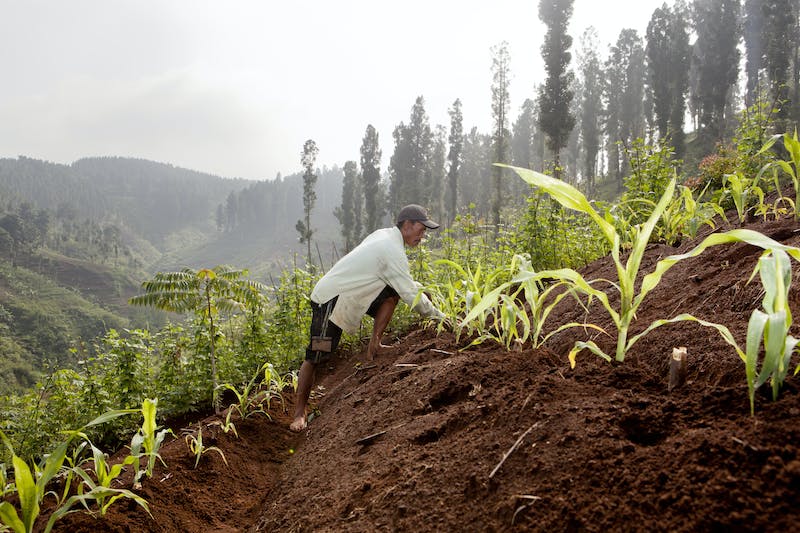 2016: Now 51 years old, Kardi has not yet been able to make the full transition away from illegal farming, as this transition can be complicated and expensive. CI’s team continues to work with him and listen to his needs; although eventually Kardi will have to abandon this land as the trees grow bigger and their shade encroaches on his crops, CI will not force him to leave, as reforestation can only be successful if local people can survive without chopping down the trees. Kardi believes he has about four years before the trees make farming more difficult. 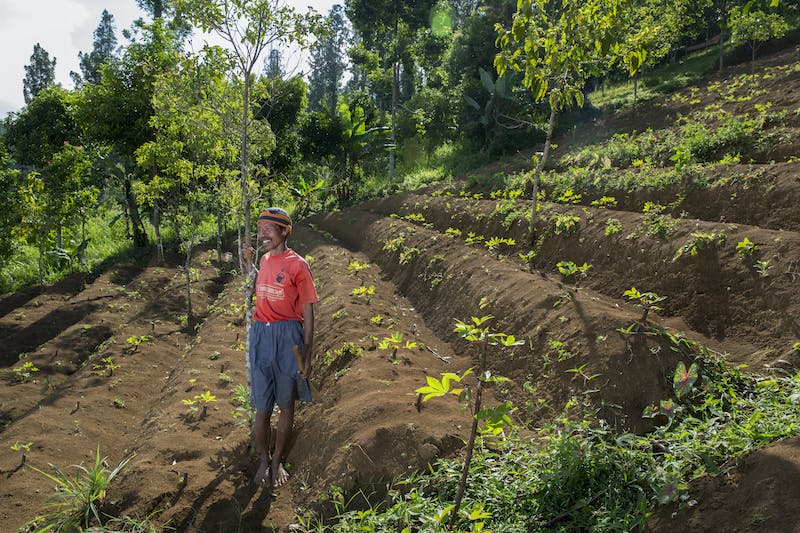 2012: This is Kardi’s granddaughter, Zahra, who was seven years old when I met her in this field four years ago. She was curious but shy, lifting her eyes only occasionally before returning her gaze to the ground. This was the only photograph I was able to get of her on that visit. 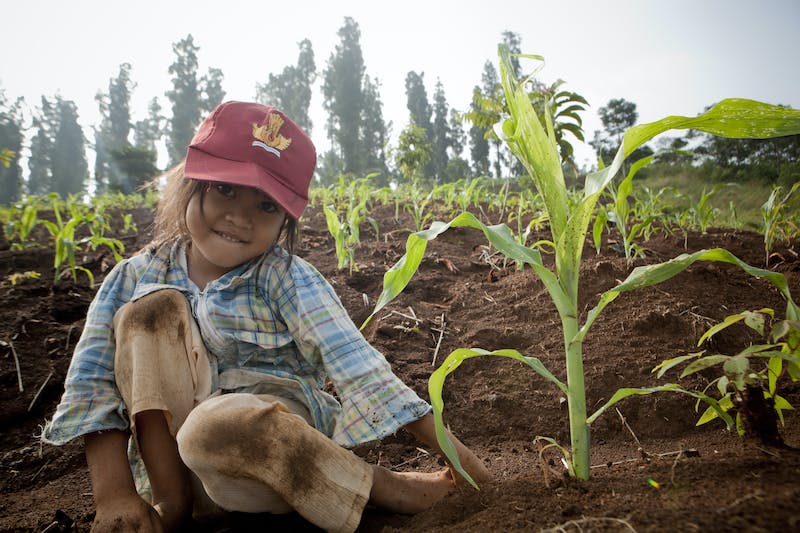 2016: Zahra is now 11 years old. When she heard I was returning to photograph her grandfather’s farm again, she came to say hello and give me a hug. Kardi is using his farming profits to pay for her school fees and books. Zahra hopes to someday become a doctor. 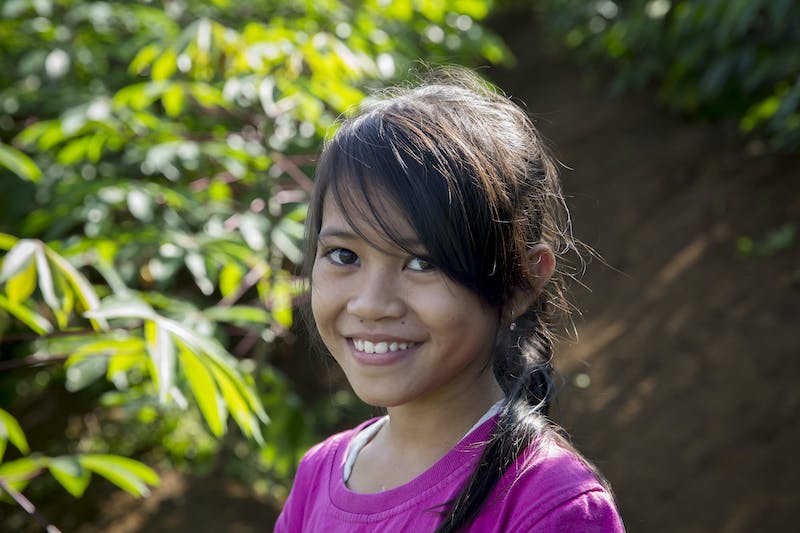 2012: Like Kardi, Ahmud was one of the first farmers to be involved in CI’s economic incentive programs that aim to help farmers transition off national forest land. In 2010, Ahmud left his farm in the national forest and was given four goats by CI as part of the income generation program. When I met him, he was living in a small house made of bamboo. His living area was crowded with family members, but overall he seemed in good spirits. 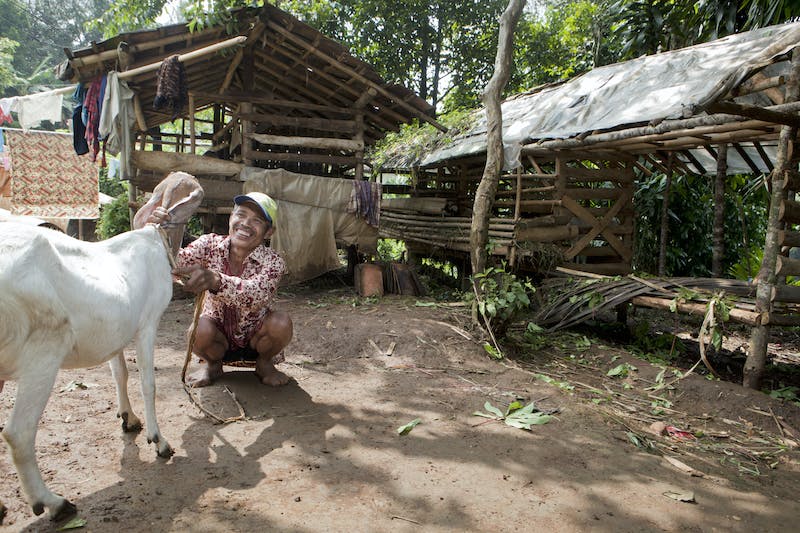 2016: On this visit, Ahmud gave me a tour of his home. For several years now, he has been successfully breeding and selling goats for meat and currently makes 5.2 million Indonesian rupiah (about US$ 391) per year from this activity — a significant portion of his family’s income. He has also started a side business making bamboo siding for homes, which he harvests legally. Using profits from both businesses, he was able to upgrade his house and build a new home for his son’s family. It’s clear that he is proud of these accomplishments. The CI team visits him regularly and is happy to see his progress. 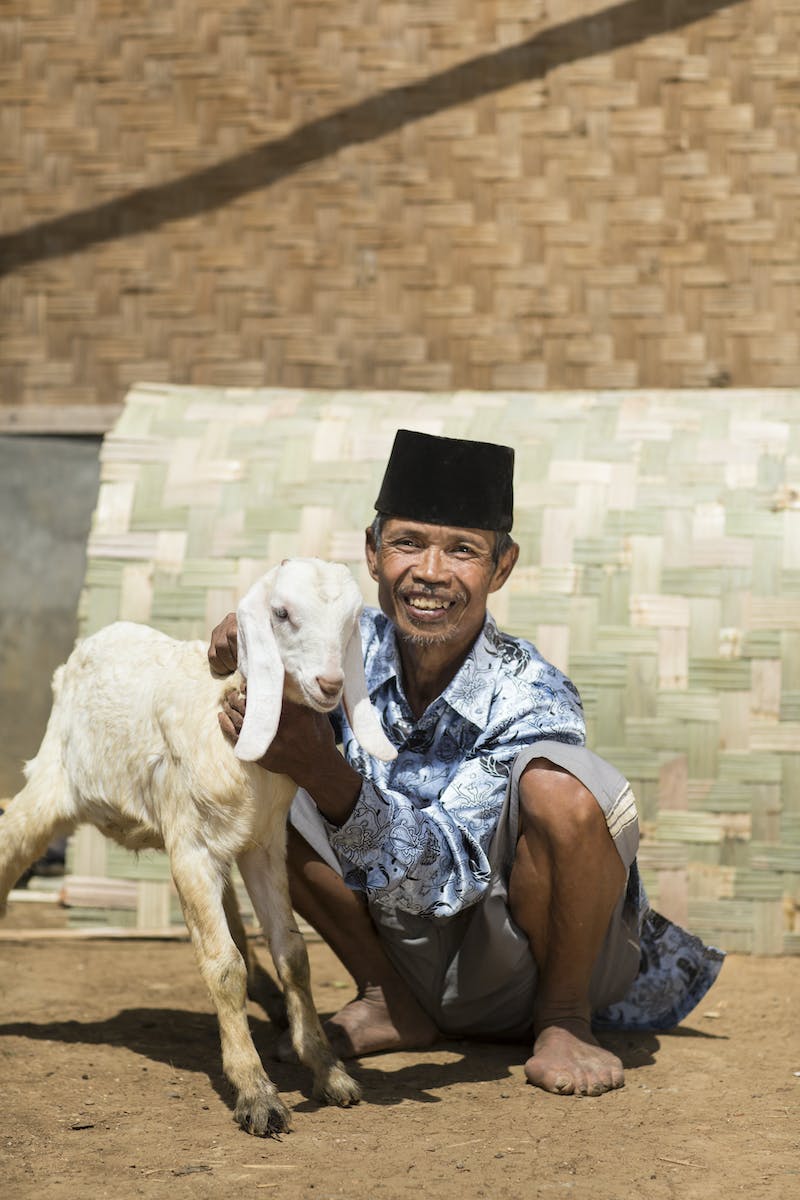 2012: I photographed Dayat spreading fertilizer on his illegal farm in the national park. 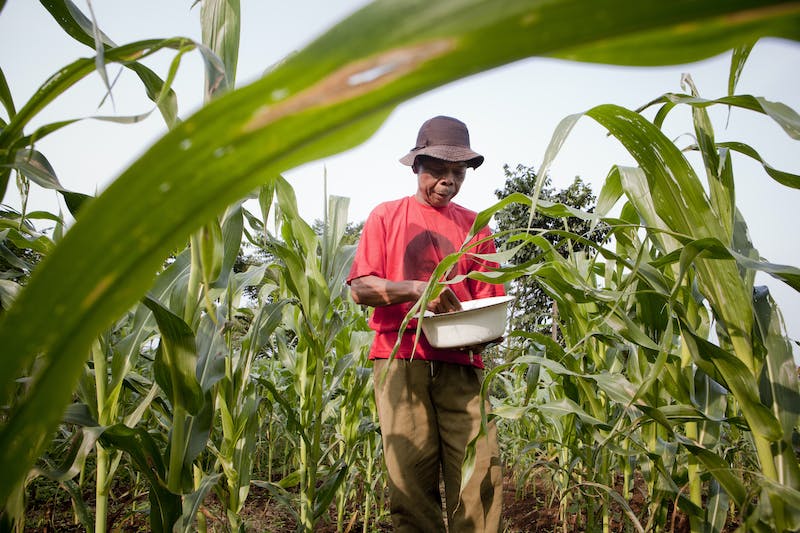 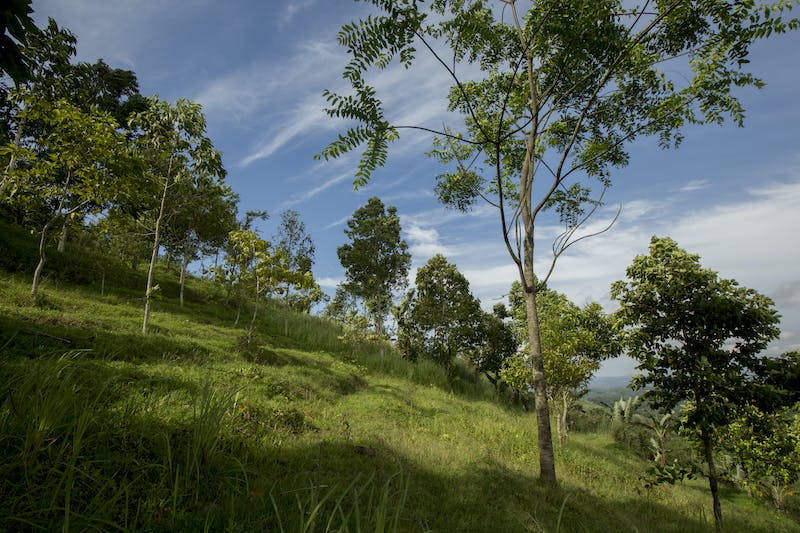 By luck we found him walking down the road; he said he stopped farming two years ago because he was breaking the law and the trees from the reforestation project were too tall for him to have an adequate crop. He now sells meatballs to stores and is much happier since he stopped farming. He said that farming was backbreaking work, and as he was getting older, he wanted something different. The reforestation, he said, was the boost he needed to help him move in a new direction. 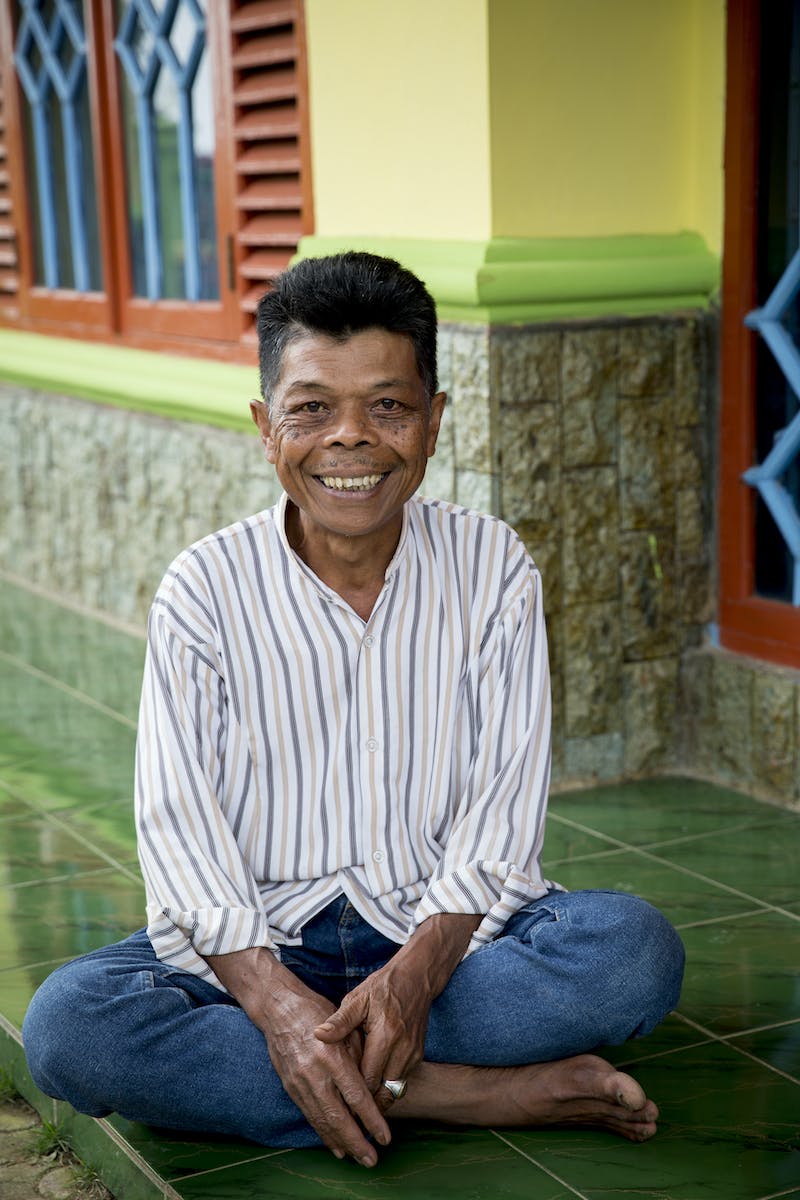 The changes that have taken place in Gunung Gede-Pangrango National Park over the past four years aren’t just incremental — you can actually see the progress. I was inspired to see the same guides, projects, farmers and community members still working to make significant impact four years later.

I’d love to return in another four years to see how things are going — to hug Zahra again and hear about her plans for university, and learn how Ahmud is doing with his businesses. This work is not easy, but the enthusiasm of the CI team gives me confidence that together with the community they will continue to tackle the hard but crucial fight for a greener and healthier future. 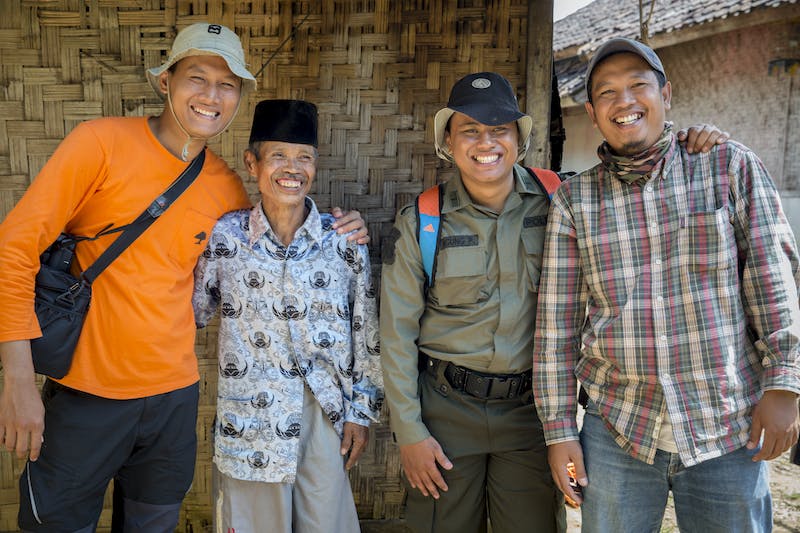