‘Aha’ moment: A missing link in an island forest

Editor’s note: In honor of Conservation International’s 30th anniversary, this is the first post in an occasional series called “‘Aha’ moment,” in which Conservation International staff reflect on moments of insight or discovery that paved the way for their careers in conservation. In this piece, blog editor Molly Bergen kicks off the series with a story about how a brief academic detour in primatology led her to rekindle her interest in the monkeys’ human cousins.

If howler monkeys had more interesting social lives, things might have turned out differently.

I was halfway through a two-week field course on primate behavior on Ometepe Island, whose two forest-and farm-draped volcanoes emerge from the middle of freshwater-shark-filled Lake Nicaragua. At the moment, I was searching through the field station’s “library,” in this case a musty trunk full of yellowed scientific papers stored in a dark, cobwebbed closet.

As a college student studying anthropology and a longtime animal lover, I had been contemplating a career in primatology when I came across a flyer for this course; I thought it would be a perfect way to give field biology a try. I pictured myself sitting on an overturned log in the jungle, listening to birdsong and watching howler monkey infants scamper overhead as I wrote “groundbreaking” observations in my field journal.

There was just one problem. I soon came to the (highly unscientific) conclusion that mantled howler monkeys are among the least interesting primates on the planet to watch. (Listening to them, however, is a different story.) They mostly eat leaves, a fairly low-energy food source, and consequently spend most of their time sleeping high in the trees. Here’s an actual excerpt from my observation journal, in which I recorded what a particular monkey was doing every minute on the minute: “Sleeping. Sleeping. Sleeping. Turning over. Sleeping.”

There were other warning signs that this wasn’t the profession for me. I soon learned that much as I love primates and being outside, I don’t love waiting for monkeys to poop so I can collect their feces in a Ziploc bag, sift through it and measure the seeds it contains.

Still, I had a research paper to write. As I flipped through the scientific studies and old magazines in the trunk for inspiration, one of them caught my eye. It was a story about a community in Panama that had built a “canopy crossing” bridge over a road to allow monkeys to cross without fear of becoming roadkill. As a result, there were more monkeys around to fuel the growing wildlife tourism industry, which brought more income into the community — a true “win-win” for people and monkeys. 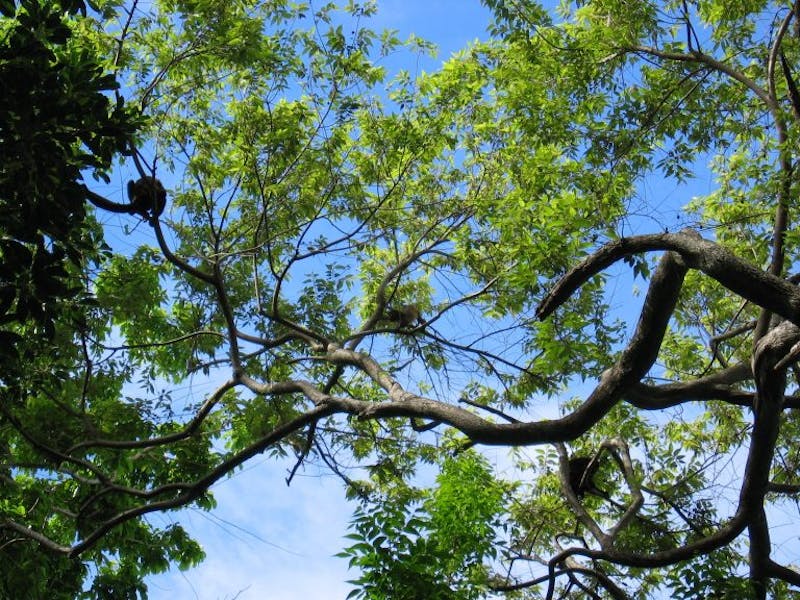 As I read this story, I realized this was part of what was missing from my experience on Ometepe: the human element.

Each day my fellow students and I would wake up before dawn and walk down the dirt road toward the patch of forest where our study subjects lived. We’d pass small, concrete houses with curling woodsmoke and chickens pecking in the mud near the front steps. Glimpses of children leaning in doorways and waves of hello from the farmers on the way to their fields were the only interactions we had with local people — the people whose understanding and willingness to help was essential to keep the howlers and other species around.

Although mantled howler monkeys are not currently threatened with extinction, like most species their survival depends on animals and humans finding a way to live together on the same patch of Earth. Sitting on the floor of that closet, I realized that studying primate social interactions will be moot if the species disappears because people don’t see the value in its survival.

And more threats could be imminent for the monkeys, which have suffered from mass die-offs in recent years. Construction has begun on a canal through Lake Nicaragua that would be larger than Panama’s — an economic endeavor embraced by many in this high-poverty nation, but one whose environmental and social impacts on the lake and the island are still unclear. If local economies were better linked to the conservation of nature, whether through expansion of ecotourism or paying communities to keep their forest standing, perhaps this type of development wouldn’t look so appealing.

After two weeks of looking up in the trees, I found my gaze returning to the people around me — the complex cultures, rich histories and personal stories that had piqued my interest in anthropology to begin with. My time on Ometepe had fueled my interest in examining the intersections between people and nature, and reinforced that the choice between protecting nature and providing for people is a false one. In reality, it’s all or nothing.