Aboard the Hokule‘a: Sailboats, Small Islands and the Stewardship of Nature

Both hulls of the Hokule‘a pointed with pride out to sea from Pago Pago Harbor. Leaving port, the sun was high above us, the waves broke with white peaks of foam, and the worn edges of the dark green island of American Samoa bade us farewell. 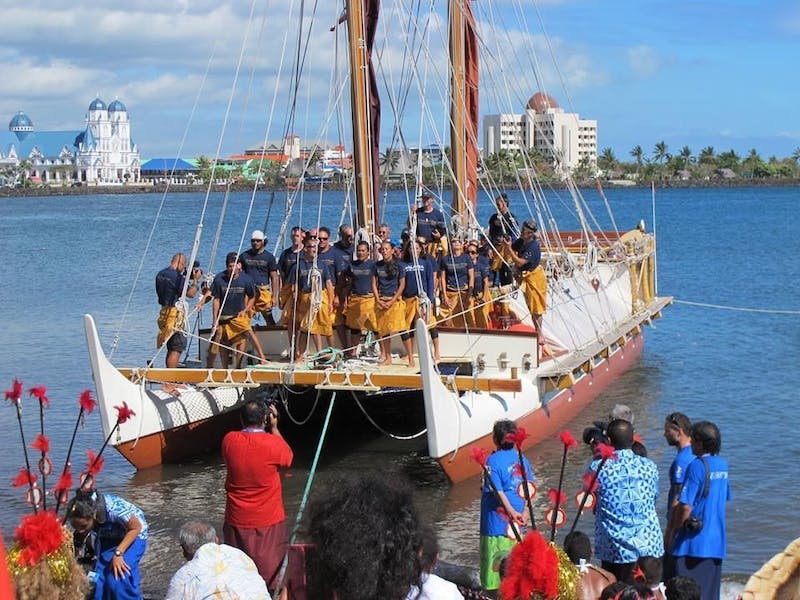 Crew aboard the Hokule‘a upon arrival in Apia, Samoa. (© Conservation International/photo by Greg Stone)

The open ocean was ahead of us, and beyond that our destination: Apia, Samoa. It’s only the next island over, but in the Pacific the “next island over” can be about 100 miles [161 kilometers] away.

It is fitting that I traveled on board this ship, of a style and tradition that Pacific cultures used for centuries to convey themselves from island to island, to a meeting where the future and survival of island cultures around the world would take center stage. The sail brought us to Apia to attend the third International Conference on Small Island Developing States (SIDS). It is a gathering that only happens every 10 years, and it brings together the heavy hitters and decision-makers for ocean and island conservation.

Master Hawaiian navigator Nainoa Thompson asked me to join the crew of Hokule‘a months before this journey, I was honored to participate. Also onboard for this adventure was my good friend Wyland, the world-renowned ocean artist and a natural goodwill ambassador. Everywhere we went while at port, Wyland painted an ocean mural on the side of a building with children and local artists. 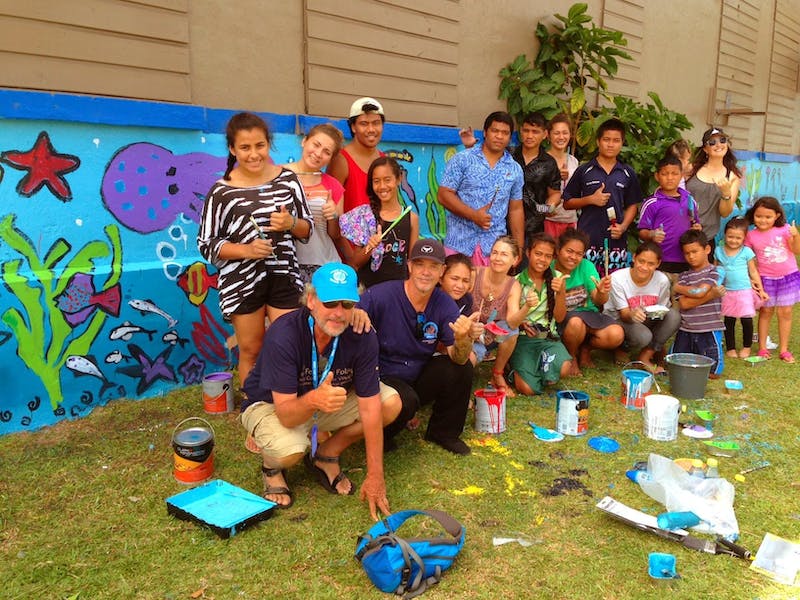 Greg Stone and Wyland (bottom left) finish up painting a mural with a group of kids in Samoa. (photo courtesy of Greg Stone)

Everyone likes to be part of something bigger than his or her self. Joining the Hokule‘a and the Polynesian Voyaging Society, I was privileged to be a part of one leg of this important and ambitious worldwide voyage. The electric feeling from the crew onboard was palpable during our trip, the purpose of which was to teach the world about the art and science of Polynesian voyaging and to inspire stewardship for natural and cultural environments through education.

Hokule‘a is a twin-hulled canoe, or vaka, based on the ancient design of open-ocean Polynesian voyaging canoes. Millennia ago, Polynesians sailed across thousands of miles of ocean and settled the many islands of the Pacific in canoes just like this. In their day, these canoes were the most advanced sailing technology in the world. They were the space shuttles of their day — crafts that took people to the limits of Earth’s outer reaches, places no human had gone before. 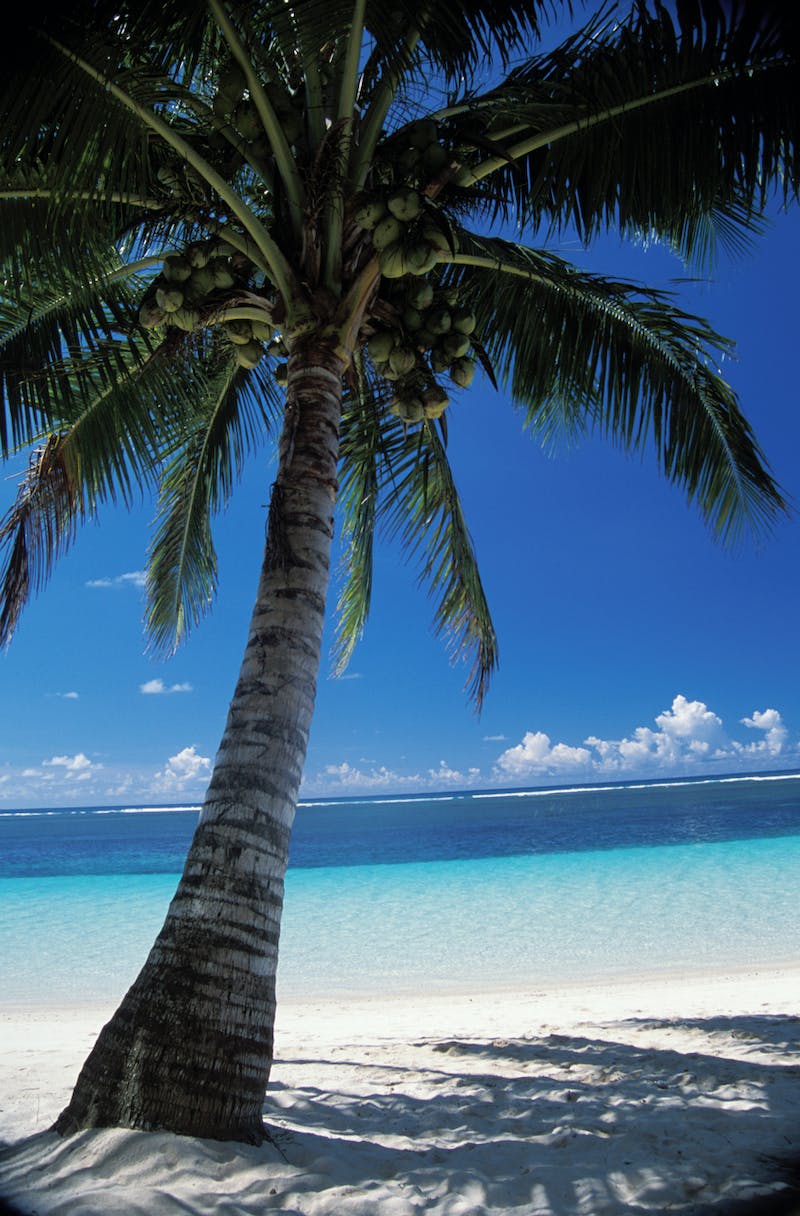 Before we embarked, all our watches, phones and electronic devices were taken away, forcing us to rely on ancient Polynesian navigation. Nainoa decided that we would attempt the sail as the wind and waves appeared to be weakening.

When we left the harbor, Nainoa scanned all directions, including the sky above and the sea below. His physical presence is dwarfed by his mana, or power, which dominated the ship and — to me — the very sea around us.

Standing on the deck with a mixed group of Hawaiians, the ship heaved more and more aggressively as we encountered the ocean swells of the South Pacific. Nainoa had to decide whether it was safe to head out into this sea.

It took many generations to develop the natural navigation traditionally practiced by Polynesian voyagers. It’s based on thousands of observations — stars, birds, waves, sun, moon, clouds, sea life — that are used to make hundreds of decisions to return the seafarers safely to port.

Watching Nainoa, I realized his decisions and actions as master navigator make him a microcosm for how people should act as stewards for nature. Like Nainoa does to navigate the rough seas of the ocean, we need to gather comprehensive observations to make key decisions about how to take care of our planet and navigate what could be an uncertain and potentially turbulent future.

Too often we make our decisions based on one or two information points. For example, gross domestic product (GDP) is only one metric for financial success, and one that doesn’t account for the value of the Earth’s ecosystems and the services they provide. As U.N. Development Programme Administrator Helen Clark expressed to me during a conversation earlier this week, we must be free from the tyranny of GDP.

In the night as we made the passage from Pago Pago to Apia, I observed Nainoa walking around the deck of the Hokule‘a. He was observing the sea, the stars, the moon, seabirds and many other aspects of nature. It was only then that he knew where we were and where we were going, and that he would deliver us safely to the harbor at sunrise.

The Earth is like a really big vaka on an endless voyage through space with all the supplies on board — food, water, energy — that we will ever have. As global populations grow toward 9 billion, we have to manage these supplies even more carefully. We must consider human well-being, equity, health and, most of all, long-term sustainability. 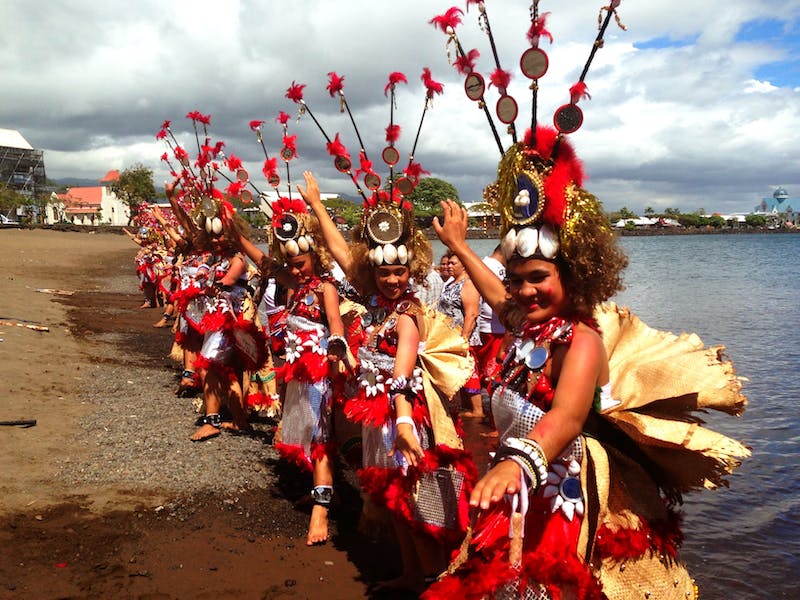 On the beach, we were greeted by thousands of Samoans dancing, singing and chanting. We responded with a traditional foot stomping, chanting energetic Hawaiian ha’a that sent chills through me. It is how Pacific Islanders have celebrated such meetings for thousands of years.

Shortly after our arrival, U.N. Secretary General Ban Ki-moon boarded the Hokule‘a and we took him for a short sail, discussing our voyage and ocean conservation. He too was deeply moved by the symbolism of the Hokule‘a voyage. Humbled, I could tell that we shared the same respect for Pacific Island voyaging and their stewardship of the ocean. 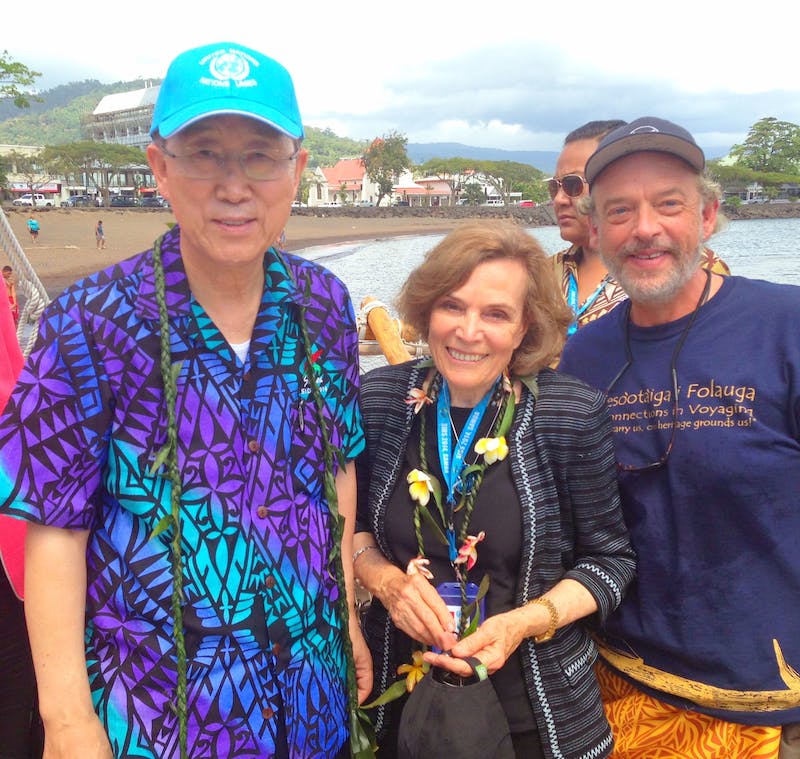 Now deep into this landmark SIDS conference, I know we have a huge and important task ahead: We must gather and analyze information about the Earth, including climate change, which is a major challenge for these nations; overfishing; and developing healthy, sustainable economies based on the world’s oceans. It is called the “blue economy,” and it is a concept upon which the future of the Pacific and world depend.

Tonight, however, tucked into the comfort of my hotel room instead of sleeping out on the water, I long for Hokule‘a, the lessons she and Nainoa taught me and the gently rocking sea putting me to sleep.

Greg Stone is chief ocean scientist and executive vice president for CI’s Betty and Gordon Moore Center for Science and Oceans. Thanks to Sue Miller Taei for her tireless dedication leading CI’s involvement at the International Conference on Small Island Developing States.