A rarity: Whale shark researchers tag female of the species

Editor’s note: In March, a team of scientists from Conservation International Indonesia tagged a female whale shark — the first ever tagged in West Papua.

The shark, named “Susi” after Indonesia’s Minister of Marine Affairs and Fisheries (MMAF), Susi Pudjiastuti, will give scientists new insight into how the diving and movement behaviors of female whale sharks differ from those of male whale sharks.

In this report, Erfa Canisthya, a project officer at Conservation International Indonesia, describes how the scientists tagged the female whale shark and what information they hope to learn.

The day we found the female whale shark started like any other whale shark tagging expedition.

Our team, comprised of Conservation International scientists and local governmental representatives from Kaimana, West Papua, were diving near Triton Bay in the southern Bird’s Head Seascape, taking photos of every whale shark we encountered and recording key features of each individual, including its length, sex and any noticeable injuries.

As two large whale sharks slowly appeared together out of the gloomy depths, you can imagine our team’s excitement when the sharks approached close enough to reveal that one of them was a female. Of the nearly 200 whale shark individuals we’ve recorded from West Papua, only three have been females, and we’ve never managed to tag one.

After photographing both sharks, our team quickly exited the water to watch as the animals approached a nearby fishing boat to feed on the anchovies the fishermen were netting. Almost as if on cue, the female whale shark entered the boat’s massive fishing net, still hungrily feeding on the small fish and clearly oblivious to the fact she was now trapped inside the net.

Our team wasted no time in taking advantage of the situation, entering the net with the shark, which by this time had stopped swimming and was lying in the bottom of the net as if in a hammock. Within 15 minutes, Conservation International scientists had managed to secure a custom-built satellite tag onto her dorsal fin and record a number of detailed measurements of the shark – including her total length of 6.16 meters (20.2 feet).

We then released the shark, and she swam off, seemingly none the worse for wear. Indeed, our previous work with the Georgia Aquarium has shown conclusively that the tagging operation does not cause any measurable stress to the sharks. 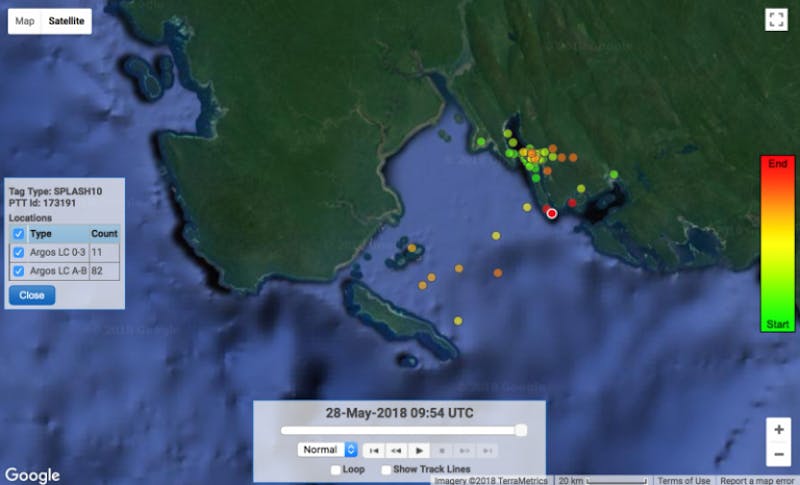 Susi’s satellite track since being tagged in early March 2018. Each dot represents a period of time she was on the surface long enough to obtain a satellite fix; during this time she has remained generally near to shore in Triton and Bitsyari Bays in Kaimana in the southern Bird’s Head Seascape in West Papua, Indonesia. (© Conservation International)

Why was this particular tagging so exciting to our team?

As noted above, female whale sharks in this part of the world are very rarely encountered; nearly all big aggregations of whale sharks in this region are composed predominantly of juvenile and young adult males. According to Mark Erdmann, vice president of Asia-Pacific marine programs for Conservation International, though there is every indication that whale sharks give birth to roughly equal numbers of males and females, for some reason the females are hardly ever seen. Many whale shark experts, he says, believe the females are simply behaving differently than the males, either spending more of their time in the mysterious depths or otherwise feeding in areas of the ocean far from human eyes.

With that in mind, we are hopeful that the information gained from this tagged female will shed some light on the mystery of female whale sharks’ movements and behaviors over the coming two years. Initial data from the tag doesn’t show any behaviors particularly different from our tagged males, but it’s still very early in the deployment, and we are expecting that over time we’ll see this shark do some movements we haven’t seen the boys do. 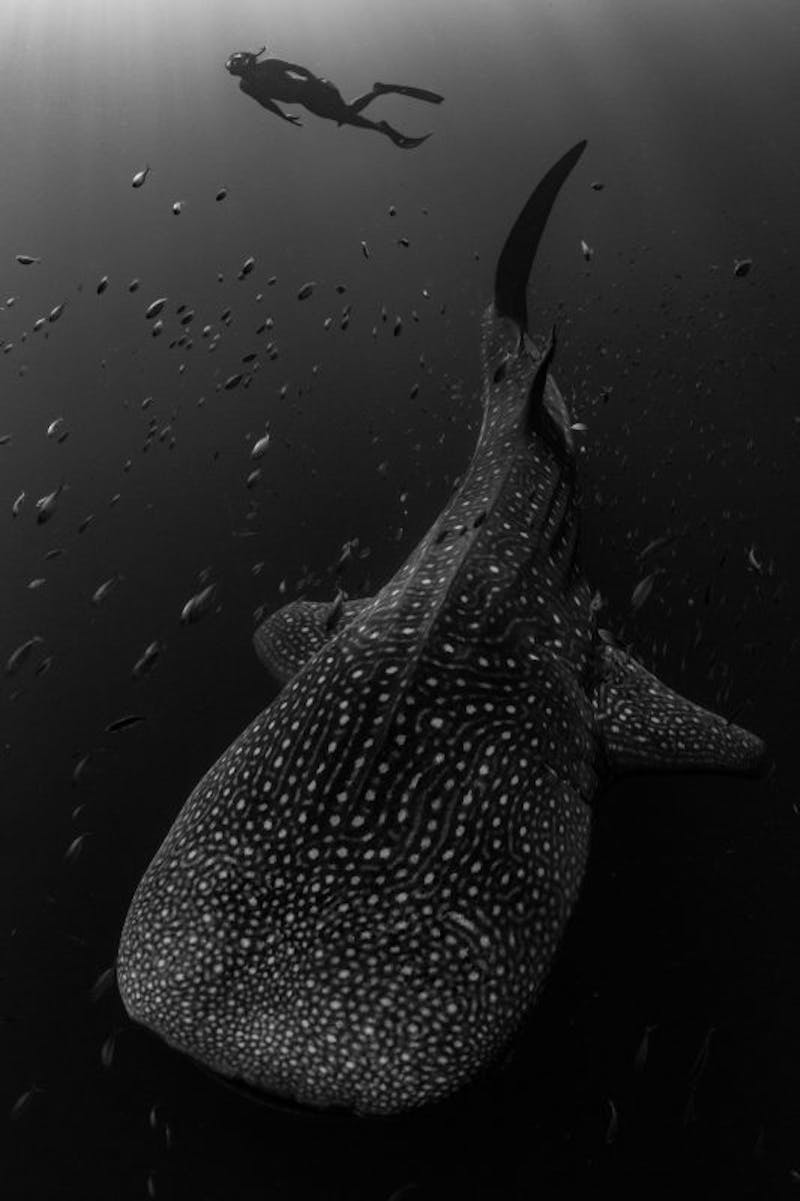 To celebrate this important scientific advance, we were pleased to name West Papua’s first tagged female whale shark “Susi,” in honor of Indonesian Minister of Marine Affairs and Fisheries Susi Pudjiastuti, and particularly to show our appreciation of her commitment to promoting sustainable marine and fisheries resources management in Indonesia. We have found that naming tagged whale sharks after public figures can help raise awareness and familiarity of whale sharks within the online community and general public.

To date, Conservation International has deployed 47 satellite tags on Indonesian whale sharks in central and eastern Indonesia. The data we’re getting back from these tags on whale shark movements and diving behaviors have been invaluable in helping design strategies to protect their populations and guidelines for the development of sustainable ecotourism around these gentle giants.

Cover image: “Susi” the whale shark, pictured above, swimming in the Pacific after being tagged. (© Abraham Sianipar)