‘People are more important’: A conversation with Anote Tong

Editor’s note: The island nation of Kiribati has a geography that boggles the mind. At 3.5 million square kilometers (1.4 million square miles), the country’s exclusive economic zone is the 12th largest in the world, just behind Brazil’s. And yet Kiribati is 99.98 percent ocean, with its total land area only about the size of New York City. With so much ocean, Kiribati is experiencing the future of our oceans now. With the U.N. Oceans Conference under way this week, Human Nature talks with former Kiribati President Anote Tong — a Lui-Walton Distinguished Fellow at Conservation International — about storm swells, the Law of the Sea and what it means to be a “rational radical.” 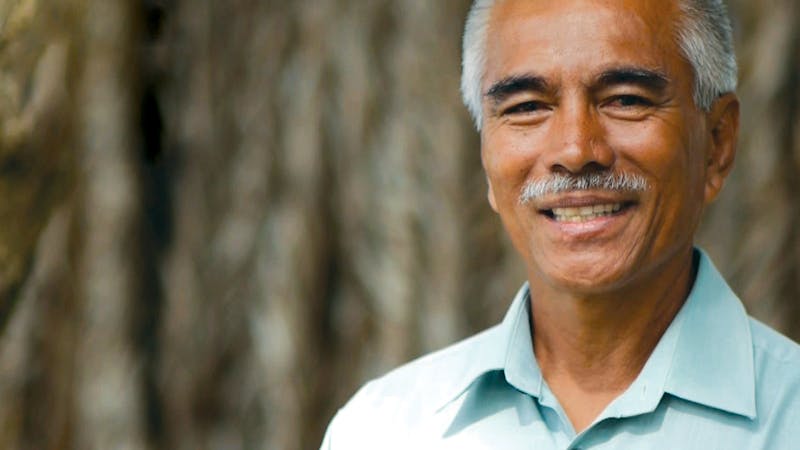 How did you first become involved in conservation?

As leader of a nation that is on the front line of the climate change challenge, I went through a lot of struggles trying to get the international community to listen to our voice, to try to put into focus the human dimension of what I believe to be the greatest moral challenge facing humanity at this time — at any time. In trying to do that, I demanded of the international community that there be commitments, that there be sacrifice. In our own case, we did this by designating a very significant part of our ocean as a maritime protected area, constituting something like 11 percent or in total more than 400,000 square kilometers (150,000 square miles) of our ocean — a part of our ocean that is one of the most fertile fishing grounds. That was our contribution — our sacrifice to humanity in terms of our sustainability in the future — so that not only can we benefit today but so our children and our grandchildren can also be able to benefit from the fishery into the future.

Tell us about Kiribati. How is it threatened by climate change?

Kiribati is a beautiful country. We have more than 30 islands, almost all are atolls islands. Atolls are very low lying. We have no rivers. We have no mountains. And therefore the beach really is snow white — beautiful. By the same token, this is what makes them extremely vulnerable to what’s happening with the impacts of climate change. They are very low lying — on average not more than 2 meters above sea level — and even that maybe is generous. What is happening with climate change poses an existential threat for our people, for our future generations. With global warming, with increasing temperature — not only within the atmosphere but also within the ocean — what we are beginning to experience has been stronger storms that come our way that never did in the past. We had a storm in 2015 that brought winds and waves which we have never experienced. And so because of the low altitude, the waves were coming over the islands. They were flooded.

Have you seen progress in dealing with climate impacts to your nation?

We have the Paris Agreement, but it still hasn’t solved our problem. I remember distinctly saying, “Fine. So we will control temperature rise. We will control the emission levels. But what about those for whom this is already too late — for whom the emissions already in the atmosphere will continue to impact the future?” Paris was certainly a great achievement, but it still has not addressed our issue. This is my focus. The job is not done. We have to be able to come away at the end of the day to say, “When the next storm comes, there is a place where the mothers and the grandmothers will be able to take their grandchildren.” Whenever there is a tsunami warning, they put their kids in buckets and cooler boxes. That is the reality of what goes on. We want to remove that sense of fear and threat. We want to be able to reassure our people that when the next storm comes they can be guaranteed that they will be safe. We have to do something that would deliver that.

How do you convince others to change?

How I would describe my approach is a more of a rational radical. People don’t like to listen when you are too radical, because people will find any excuse to reject the argument, even if they know in their soul and their heart that it is true. People don’t like to be blamed. But there is always compassion in people, I believe that. But we just have to strike the right chord.

How has diplomacy for Pacific Islands changed since you took office in 2003?

Previously, we thought of ourselves as microstates. That was the reason we tended to be huddled in the corner, feeling that we don’t have a great deal to contribute, that we don’t have a great deal to say in world affairs. But we have begun to regard ourselves as large ocean states. Simply because it is underwater doesn’t mean it doesn’t exist. With that, we realized that we have strength, that our voice matters, that the resources within our ocean areas are important. For example, within the central and the western Pacific tuna fishery, we host 60 percent of the world’s tuna. Within the deep sea bed, it has been proven that there are huge deposits of manganese modules and crusts. We began to realize that maybe we are not so insignificant as we previously thought. That has given us a certain sense of empowerment, and hopefully we can have a greater say in what goes on that affects our future.

How does the Law of the Sea — the jurisdiction of the ocean — impact its management?

The Law of the Sea is something that has taken decades, maybe centuries, to resolve. Countries have been fighting over who owns that ocean. There have been wars fought over whether the fishing boats from a country should be fishing wherever. With the coming of the Law of the Sea in 1982, it was defined that from the baseline of the countries, they would have access to 200 miles. They would have national jurisdiction over the resources within that area. As I said, imagine a country like Kiribati, with only 830 square kilometers (320 square miles) of land, becoming a nation with over 3.5 million square kilometers (1.4 million square miles) of land and ocean. It’s a different equation entirely. And so it changed everything. But also it addresses an issue that’s been very difficult to address, and that’s the free access and the free use of the ocean over the years — the abuse of the resources. And so the control that was bestowed on countries — on ocean states — gives the responsibility and the custody to the coastal states to manage on behalf of humanity, what has been regarded as the common heritage of mankind.

What do Pacific nations need from the rest of the world to secure a just future?

I have always said that those countries and those individuals who have a capacity to do something about what’s happening really have the obligation to do it, I believe. And I think our problem as a species has been to be so focused on grabbing things for ourselves, not understanding the damage that we do. It is important that people understand that nothing is free. Someone else may be paying the price. I’ve been engaged in debate with other leaders, for whom limiting temperature rise to 1.5 degrees centigrade was not acceptable, because it would affect their economies. For me, it’s just an argument that I cannot understand — how their reasoning could be so distorted to compare their economic prosperity as being more important than the survival of people on the other side of the world. I don’t know. For me, people are more important.