Natural capital in the Amazon

Mapping the nature we need in the world’s largest rainforest

From oxygen and fresh water to carbon storage, the forests of the Amazon Basin and Guiana Shield provide irreplaceable services to all of humanity. Pr​otecting the forests, rivers, wetlands and other "natural capital" that is the source of these services requires us to know where it is and how it’s doing.

To that end, Conservation International has mapped the most essential natural capital in Amazonia to help governments, development banks, indigenous communities and others protect it — for the good of the 34 million people who live in the region, and for the good of humanity.

As pressure on the Amazon grows from development, agriculture and climate change, this information has never been more vital.​

Knowing the location of essential natural capital enables governments and other decision makers to minimize the impacts of infrastructure and agriculture on biodiversity and ecosystem services, and plan for sustainable development by ensuring conservation of ecosystems critical for both people and economies. 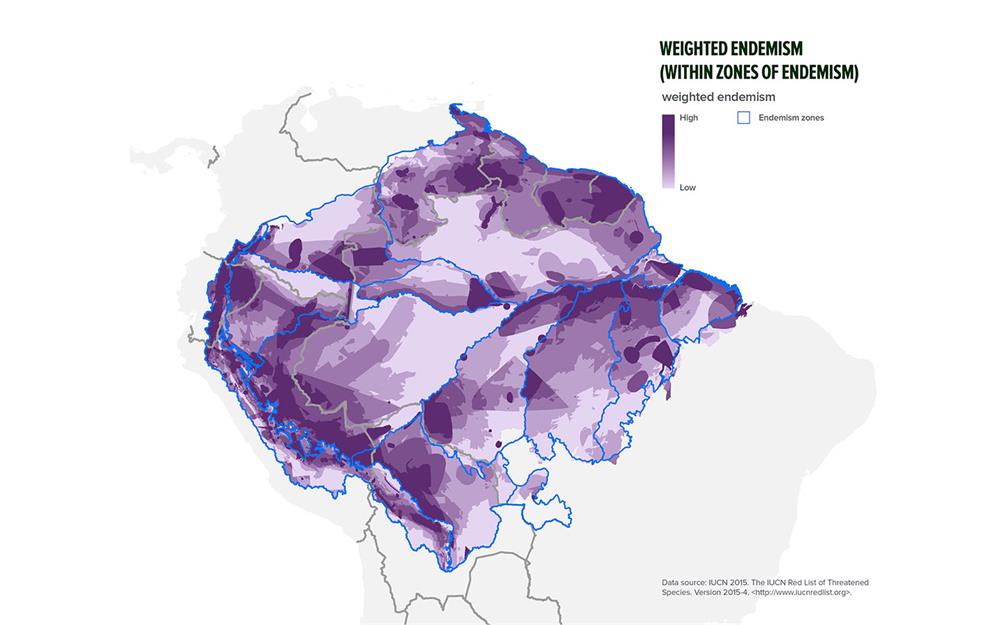 Amazonia is the most biodiverse place on Earth. Its species have fundamental roles in keeping forest and freshwater ecosystems functioning and are a significant part of our natural heritage.

“Weighted endemism” is a calculation of the numbers of endemic species, so places with more endemic species will show up as more important. It is also important to note that the map is scaled regionally — otherwise only the highly endemic Andean regions would show up on the map, according to Conservation International’s Rachel Neugarten: “One of the nice side effects of the Amazon basin being so intact and having such high diversity of species is that a lot of species range throughout that whole basin because it’s relatively similar habitat, so while the total number of species is extremely high, the number of species unique to any particular place is fairly low.” 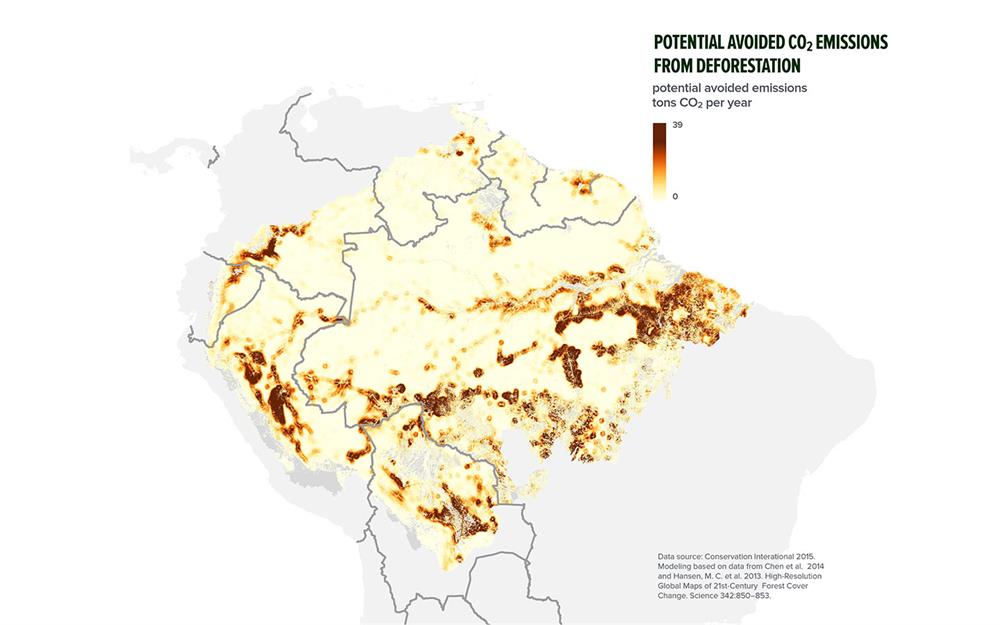 The world’s tropical forests absorb carbon dioxide from the atmosphere and, if protected, could provide 30 percent of the solution to global climate change.

Darker patches on the map are places that are both vulnerable to future deforestation — due to their proximity to roads, agricultural areas and human-accessible rivers — and have high carbon stocks.

This map shows the prospects for avoided emissions from climate change throughout Amazonia, Neugarten says: “If you’re interested in what you’re going to lose tomorrow, or you want to avoid carbon dioxide emissions, meet national emissions targets, or reduce deforestation, these are the places you might want to conserve.”

The Amazon Basin — which accounts for 20 percent of the fresh water that reaches the world’s oceans — also supplies drinking water and hydropower for millions, as well as serving as the region’s transportation network and the world’s most diverse freshwater fishery.

The map doesn’t show only the presence of water — water is everywhere in the Amazon — darker areas are where ecosystems are providing important freshwater benefits, such as flow and sediment regulation, to people and hydropower production downstream.

This map, which also locates cities and hydropower dams, is intended for downstream users to understand where the water services they rely on comes from, Neugarten explains: “These are places where, if you removed the vegetation (through deforestation, for example), you would have an impact on freshwater benefits to cities and energy production.”

We are mapping natural capital around the world in order to meet conservation targets and ensure sustainable development.

We are mapping natural capital around the world in order to meet conservation targets and ensure sustainable development.
Learn More
© Benjamin Drummond