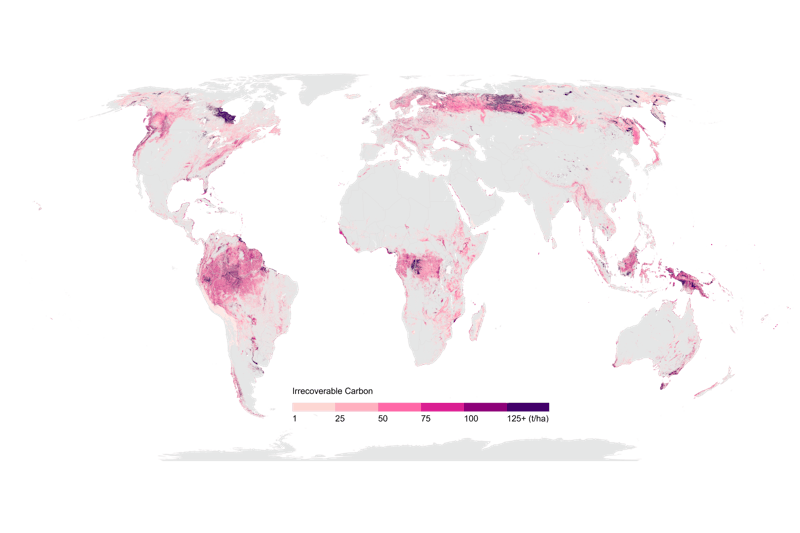 Arlington, VA (November 18, 2021) – New research out today from Conservation International maps the places on Earth that humanity must protect to avoid a climate catastrophe. These ecosystems contain what researchers call “irrecoverable carbon,” dense stores of carbon that, if released due to human activity, could not be recovered in time for the world to prevent the most dangerous impacts of climate change.

The new worldwide map, published today in the journal Nature Sustainability, builds on a landmark study that introduced the concept of irrecoverable carbon. The research finds that half of Earth’s irrecoverable carbon is highly concentrated on just 3.3% of land – primarily old-growth forests, peatlands and mangroves. These vast reserves of carbon are equivalent to 15 times the global fossil fuel emissions released last year.

Researchers say that knowing which ecosystems contain the greatest irrecoverable carbon stores can help governments focus global efforts to protect 30% of land by 2030. Targeted conservation would yield big gains – increasing the land under protection key areas by just 5.4% would keep 75% percent of Earth’s irrecoverable carbon from being released into the atmosphere, researchers found.

“We are at a pivotal moment for climate action – the science and the solutions are here, and so is the urgency,” said Monica Noon, a Conservation International scientist and the study’s lead author. “Knowing that irrecoverable carbon is concentrated in a relatively small area of land can help guide the protection of ecosystems we now know are essential for Earth’s climate.”

According to the Nature Sustainability study, the largest and highest-density irrecoverable carbon ecosystems include

In the last decade alone, agriculture, logging and wildfires have released at least 4 gigatonnes of irrecoverable carbon, equal to 5% of human-caused fossil fuel emissions over that time, the study reveals. Threats to irrecoverable carbon vary by ecosystem and location, researchers noted, but the most imminent and widespread risks come from legal rollbacks to protected areas that shrink or eliminate existing protections, land use changes for agriculture and development, and climate-change-driven events such as forest fires or extreme weather.

“The consequences of releasing this stored carbon would stretch on for generations, undermining our last chance to stabilize Earth’s climate at tolerable levels for nature and humanity,” said Johan Rockström, Conservation International chief scientist and co-director of the Potsdam Institute for Climate Impact Research, a leader in climate and sustainability research. “We must act now to safeguard the planet’s ability to serve as a carbon sink, which includes prioritizing these unique ecosystems.”

“We have less than 10 years to cut emissions in half and prevent our climate and biodiversity from reaching an irreversible tipping point,” said Allie Goldstein, a co-author on the study and Conservation International’s director of climate protection. “The good news is that we haven’t yet reached that threshold. This is a rare scenario in which we have the time and information needed to prevent environmental disaster before it happens. Our research shows that investing in irrecoverable carbon reserves is a win-win-win approach that can improve the health of our climate, the health of Earth’s species and, ultimately, the health of humanity.”

Susan Cook-Patton, a coauthor of the paper and senior forest restoration scientist with The Nature Conservancy said that, “given the strengthened commitments that need to come out of the Glasgow UNFCCC COP this year, this global map represents a valuable addition to the science toolkit for climate policymakers. It is especially critical that governments fast-track protection of irrecoverable carbon stores that are at imminent threat of irreparable damage. This map can help find those locations before it’s too late.”

To secure the benefits of irrecoverable carbon, the study’s authors recommend

To read the entire study authored by scientists from Conservation International, The Nature Conservancy, Wildlife Conservation Society, Potsdam Institute for Climate Impact Research and the University of Wisconsin-Madison, click here.

For additional information and to view some of the study’s maps, visit the irrecoverable carbon web page.