Mapping Coral Reefs on the High Seas, A Lifeline for Ocean Biodiversity

Newly found ecosystems could be vulnerable to deep sea mining

The study, co-authored by Conservation International’s ocean science technical advisor Dr. Daniel Wagner and senior vice president of the Center for Oceans ‘Aulani Wilhelm, in collaboration with several other scientists and institutions, is a first step toward tracking the locations of these highly biodiverse, yet largely unknown ecosystems. It provides a framework designed to encourage policymakers, corporations and conservationists to protect high seas reefs against threats, including the possibility of deep-sea mining and destructive fishing practices. 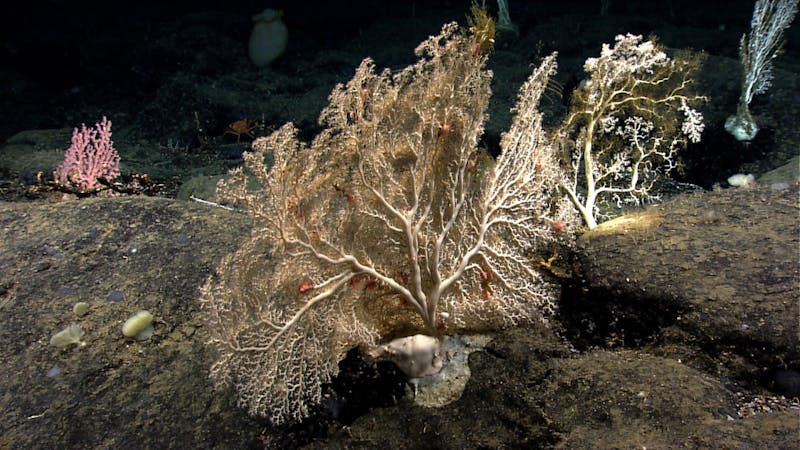 “People often think of the high seas as ocean deserts. In these remote high seas areas, there is actually a lot of diversity, including coral reefs, which are some of the most biodiverse ecosystems on Earth,” said Wagner. “We know they exist but how do we protect them when so much of the seafloor remains unmapped and virtually unstudied in areas beyond national jurisdiction?”

This study begins to provide answers to these questions with an analysis of more than 537,000 records on the distribution of deep-sea reef building corals, including 116 in international waters at depths between 218-5,647 meters.

The study found that thousands of feet beneath the surface, where some light manages to penetrate, coral reefs are growing on steep topographical features including underwater mountains, sea ridges and escarpments – features that are also aspirational targets for mining. Although not as bright and colorful as the reefs most are familiar with, these deep-sea environments are just as biodiverse and essential to the health of our oceans as surface reefs.

“We know the reefs on our doorstep -- the Great Barrier Reef or the reefs off the Florida Keys -- and we know they are impacted by climate change, overfishing and pollution. Right now, these remote reefs that are continually being discovered are less impacted by human activity and could survive as refugee locations for sea life, which are essential as surface reefs become increasingly degraded,” said Wagner.

The deep sea represents by far the largest portion of our planet and is home to the greatest diversity of species and ecosystems on Earth. It provides critical environmental goods and services to millions of people including nutrition, income and weather regulation.

“There is so much of our ocean that we do not yet know, so we need to invest in science to inform development that is truly sustainable,” said Wilhelm. “We are in a unique position to be proactive with deep-sea mining and ensure we avoid impacts we cannot reverse at costs neither people nor the planet can absorb.”

Deep-sea reefs currently enjoy very stable conditions, because of this they are highly vulnerable to any physical disturbance – including those that will come from deep-sea mining. Species at these depths are slow growing and long lived, so it could take thousands to millions of years for these environments to recover from mining impacts, time that we simply do not have.

The deep-sea reef locations identified in the study are still vastly unfamiliar, making the case for continued scientific exploration and a precautionary approach, rather than mining exploration. For example, one coral reef documented in international waters off the coast of Brazil by the study is located only 35 miles away from where there is an active exploration contract for deep-sea minerals.

Current scientific understanding points toward adverse and long-lasting impacts should deep-sea mining be permitted. Habitats and the environmental quality of the oceans will likely be degraded, particularly for sensitive species like deep-sea corals and the myriad associated species that depend on coral reefs, including humans.

Earlier this year and as the International Seabed Authority continues developing regulations on deep-sea mining exploitation, Conservation International called for a 10-year moratorium on deep-sea mining to allow for additional time to increase our scientific understanding of the risks associated with this type of mining, and to further study the deep-sea environments that could be negatively impacted.

“The decision whether or not to open up the deep seabed to commercial mining is one of the most important calls impacting ocean conservation in human history,” said Wagner. “We have a once in a lifetime opportunity to change the way we use science to support sustainable development. It’s essential we use this time to gain a better understanding of the ocean and our new study just touches the surface of how much more there is to learn about the balance of life on the high seas.”