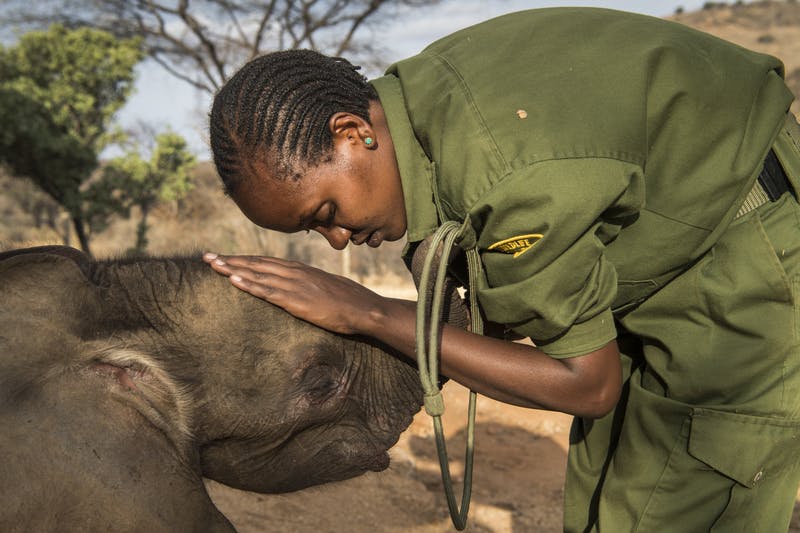 Arlington, Va. (September 21, 2019) – “My Africa”, a virtual reality film by Conservation International, has been selected as a finalist for the Jackson Wild Media Awards 2019 in the Best 360° Storytelling category. The film was selected from among over 1,000 entries vying for more than 30 awards. “Drop in the Ocean”, the latest social virtual reality project from Conservation International, will exhibit throughout the weeklong summit in Jackson, Wyoming.

Narrated by Academy Award-winning and Kenyan-raised actress Lupita Nyong’o, “My Africa” transports viewers to an elephant sanctuary in Kenya, where a community is reknitting the bonds that have long enabled people and wildlife to coexist.

The film opens with iconic wildlife scenes. Viewers stand amid a thundering herd of wildebeest while it migrates across the Mara River, in front of a lioness as she captures her prey, and later, with an inquisitive baby elephant in a community-led sanctuary in northern Kenya.

Directed by four-time Emmy winner David Allen, the project was captured with virtual reality cameras in the Namunyak Wildlife Conservancy in Samburu County of northern Kenya at the Reteti Elephant Sanctuary, the first elephant orphanage in Africa owned and operated by the local community. In a region where conservation has traditionally been pursued by wealthy outsiders, Reteti, and the surrounding conservancy organization, Northern Rangelands Trust, offer a different model — one grounded in local leadership and traditional knowledge.

“‘My Africa’ is about a path forward for saving the miracle that is Africa — the last place on Earth where significant numbers of the world’s largest land animals still roam,” said project Executive Producer and Conservation International CEO Dr. M. Sanjayan. “If we are going to save nature in a crowded world we need to entirely rethink how we go about it. This film shows a new way, one that unites, rather than divides, people from wildlife. Today, conservation is not about building fences but rather breaking down barriers, so that local communities benefit when nature thrives.”

Following its premiere at the 2019 Tribeca Film Festival, “Drop in the Ocean” has been touring spots abroad and in the US, and now arrives at the Jackson Wild Summit for attendees’ enjoyment. Narrated by explorers, filmmakers and environmental advocates Philippe and Ashlan Cousteau and built from the photo archive of Academy Award-winning micro-photographer Peter Parks, “Drop in the Ocean” is a 7-minute group interactive VR experience that shrinks participants down to about 2 inches tall as they hitch a ride on a jellyfish to encounter the mysteries of the deep ocean and directly experience the plastic pollution crisis as sea life does every day.

The Jackson Media Awards, “nature film’s equivalent of the Oscars®”, honor filmmaking involving nature, science, and conservation storytelling. The 2019 awards have divided up finalists by content, programming, and craft. “My Africa” is a finalist under programming in the Best 360° Storytelling category. Winners will be announced Thursday, September 26.

“My Africa” was produced by Passion Pictures in association with Vision3 and with the support of the Tiffany & Co. Foundation. Additional support for distribution was provided by glassbaby.

"Drop in the Ocean" was co-produced by Conservation International and Vision3 in association with Vulcan Productions. It was made possible by SC Johnson and is powered by HP.

To learn more about “My Africa” and “Drop in the Ocean”, click on the links below.

Vision3 are industry leaders in 3D production for Hollywood Feature Films, award winning Natural History large format documentaries, and innovative virtual reality and augmented reality experiences. The London-based company was formed in 2008 and is the recipient of eight Lumiere Awards from the International Advanced Imaging Society, including best Stereography for WB’s “Gravity.” For more, go to vision3.tv.

About The Tiffany & Co. Foundation

Established in 2000, The Tiffany & Co. Foundation provides grants in environmental conservation, working to preserve the world’s most treasured landscapes and seascapes. The Foundation supports organizations dedicated to the stewardship of natural resources in the areas of responsible mining and coral conservation. For more information on The Tiffany & Co. Foundation, please visit tiffanyandcofoundation.org.

Passion Planet, established in 2011, has swiftly secured a stellar reputation for innovative and inspiring science and natural history documentaries. After a prolific 20-year career as a leading producer in his field, multi Emmy-award winning David Allen now heads up a large team of leading creatives, producers and experts across Planet’s specialist output. Passion Planet has already garnered 13 international awards, including a Wildscreen Golden Panda and two Emmys. For more, go to passion-pictures.com.

Inspired by the healing light of a candle in hand-blown glass, glassybaby is a social enterprise founded by three-time cancer survivor, Lee Rhodes. Handmade in Seattle, Washington and Berkley, California, the votives are crafted in over 250 different colors and each given a unique name and meaning. Glassybaby donates 10% of all revenue to help people, animals, and the planet heal. To date, the glassybaby family has donated over $8 million. For more, glassbyaby.com.

SC Johnson is a family company dedicated to innovative, high-quality products, excellence in the workplace and a long-term commitment to the environment and the communities in which it operates. Based in the USA, the company is one of the world's leading manufacturers of household cleaning products and products for home storage, air care, pest control and shoe care, as well as professional products. It markets such well-known brands as GLADE®, KIWI®, OFF!®, PLEDGE®, RAID®, SCRUBBING BUBBLES®, SHOUT®, WINDEX® and ZIPLOC® in the U.S. and beyond, with brands marketed outside the U.S. including AUTAN®, BAYGON®, BRISE®, KABIKILLER®, KLEAR®, MR MUSCLE® and RIDSECT®. The 133-year-old company, which generates $10 billion in sales, employs approximately 13,000 people globally and sells products in virtually every country around the world. www.scjohnson.com.

Vulcan Productions believes that storytelling can change the world. The company produces content that informs, inspires, and activates audiences. It builds movements that change behaviors, move policies and shift the trajectories of some of society’s most pressing challenges. Award-winning projects include Sundance Special Jury Award-winner STEP, The Ivory Game, Unseen Enemy, Racing Extinction, Naledi: A Baby Elephant’s Tale, Academy Award®-nominated Body Team 12, Mind of a Giant, We the Economy, We the Voters, Ocean Warriors, #ISurvivedEbola, Girl Rising and The Blues. Upcoming projects include Ghost Fleet and The Cold Blue. For information on Vulcan Productions and its leadership in generating change through impact storytelling, visit vulcanproductions.com.