Imagine trying to identify a person just by looking at their hair — it’s possible, but exceedingly difficult.

Now imagine trying to identify thousands of people in quick succession based on their hair, from dark and straight to curly blond.

Customs inspectors face a similar kind of challenge daily when trying to identify shark species just from their fins. Every day, massive aquariums’ worth of fish and fish parts pass through airports and seaports across Singapore, one of the world’s busiest shipping hubs, bound for restaurants and wild animal markets.

As the fins come flooding in, inspectors struggle to rapidly distinguish one shark species from another. Fins from sharks and rays that are illegal to trade can slip through the cracks.

Now, new technology will help inspectors tackle the illegal wildlife trade using a tool most already have in their pockets: their cell phones.

Powered by artificial intelligence, a new app called Fin Finder enables customs inspectors to take a photo of a shark or ray fin and identify it within seconds. Developed by Conservation International in partnership with Singapore’s National Parks Board, and supported by Microsoft and other partners, this app could help governments confiscate illegal animal parts that are “hidden in plain sight,” said Eric Fegraus, senior director of conservation technology at Conservation International.

“Inspectors around the world are overwhelmed,” said Fegraus, who helped develop Fin Finder. “They are expected to do the almost impossible task of identifying thousands of illegally trafficked species — a job that even some animal experts would struggle with — plus they have almost no tools to help.”

“Fin Finder is part of this tech and data revolution,” Fegraus said. “This app flags fins from potentially illegally traded species in a fraction of the time that it currently takes. The samples can then be sent for further DNA analysis to confirm the species. If it’s confirmed to be illegal, then the authorities can take enforcement action.”

The illegal wildlife trade is big business, netting up to US$ 23 billion a year.

Like elephant ivory and rhino horns, fins from threatened shark species are shipped across vast international networks. The fins of more than 70 million sharks are traded and sold annually, often going for as much as US$ 500 a pound. The majority of these fins are used in shark fin soup, a traditional Chinese delicacy dating to the Song Dynasty nearly a millennium ago.

But this delicacy has a dark side: In most cases, the fin is cut off a live shark and the massive fish is then thrown back into the water, left to suffer a slow and painful death.

While some shark species can be legally consumed, trading fins, meat and gill rakers from threatened shark and ray species could fuel extinctions — and throw off the balance of entire marine ecosystems, said Dhanushri Munasinghe, an illegal wildlife trade expert at Conservation International.

“Many shark species are considered apex predators, meaning they reside at the top of the food web,” said Munasinghe, who coordinated the Fin Finder project from Singapore. “Sharks and rays play an important role in maintaining marine ecosystems by keeping other fish populations in check. If stripped from our oceans, there would be dire consequences for ocean health, which would affect people too, particularly decreasing food security for communities that depend on fishing.”

Currently, around 40 shark and ray species, including thresher sharks, whale sharks and hammerheads, are considered illegal to trade under the international wildlife trade convention known as CITES.

“With Fin Finder, they can just snap a picture of the fin and the app will flag if something is potentially illegal to trade and requires further DNA analysis,” she added. “This can increase the efficiency of inspectors who are swamped with the daily volume of shipments.” 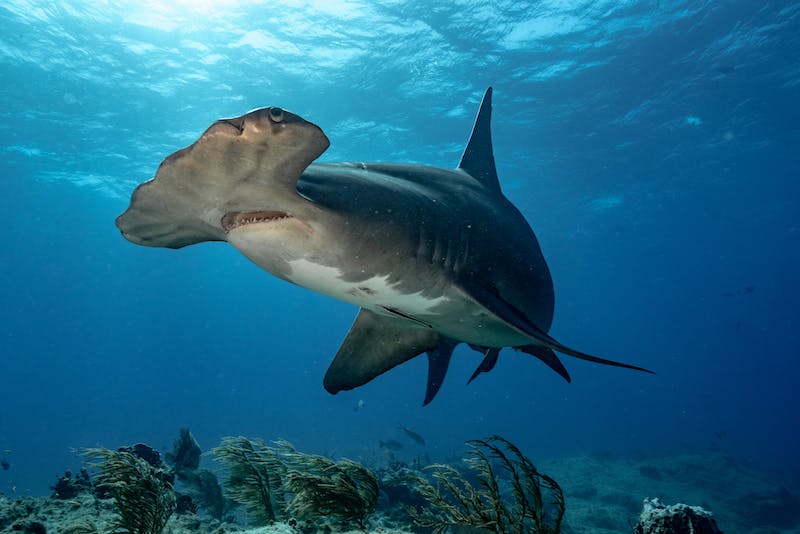 A hammerhead shark in the Bahamas © Cristina Mittermeier/SeaLegacy

Like a child who learns to spell by memorizing the alphabet, artificial intelligence (AI) enables machines to “learn” new patterns if enough data is provided. 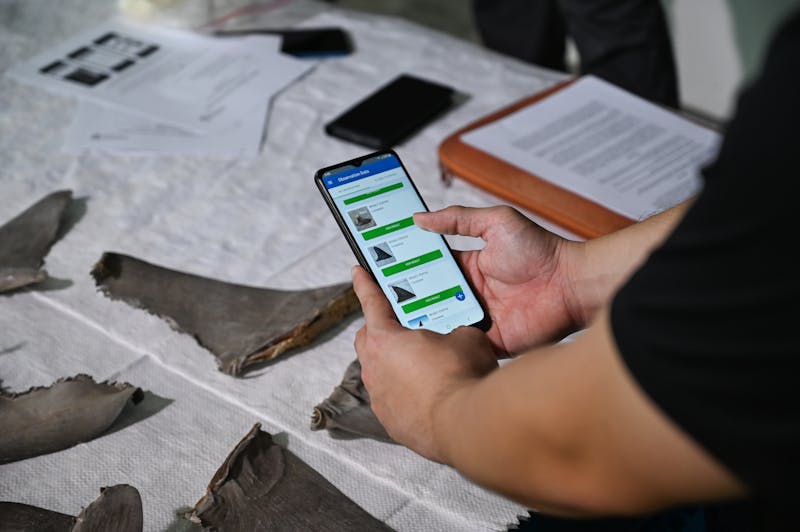 Jennifer Low, one of the volunteers from the Singapore-based nonprofit Coastal Natives, summed up the experience in one word: “smelly.”

“We would spend around three hours at a time describing and taking pictures of hundreds of shark fins, which were provided by local importers,” she said.

“In order for the AI to work, we had to get pictures from different shark species, in dried or frozen forms — and taken with different backgrounds to mimic real-world scenarios that inspectors face. You can imagine how strongly we smelled of fish by the end of the day, but it was rewarding to know we were contributing to something bigger.”

This 18-person citizen science brigade from Singapore, along with several shark and ray experts, contributed to the database of 15,000 fin images. The technology nonprofit Wild Me used the images to help train the AI models in the app to identify shark species in a matter of seconds.

Microsoft is supporting their efforts by hosting the images and algorithms from this project on the Azure cloud, a computing platform. According to Jason Holmberg, the executive director of Wild Me, one of the most exciting parts of the app is that it is only going to get better as people use it.

“The more pictures customs inspectors take of the shark fins, the more accurate the app will become at identifying shark species,” Holmberg said. “Practice makes perfect, even in machines.” 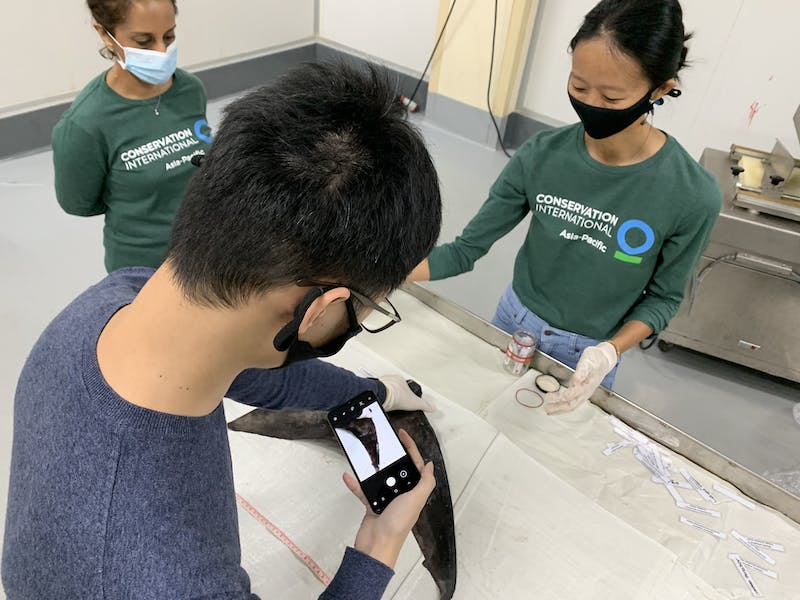 Currently, Fin Finder is only operating in Singapore, but developers hope to expand its reach to other countries to help stop the illegal fin trade worldwide. And this app is just the first phase of a larger initiative known as the Wildlife Detection Partnership, a collaboration that uses innovative technology to combat the illegal wildlife trade worldwide.

Conservation International is working with Roger Williams University and the University of Massachusetts-Boston to develop technologies that focus on protecting the world’s most illegally traded animals and plants — from pangolins to timber. One of the products under development will even flag discrepancies in customs documents, which could indicate illegal trade.

According to Fegraus, apps like Fin Finder will help give customs inspectors a leg up when it comes to identifying species across the animal kingdom.

“While national policies and adequate funding are essential to regulating the wildlife trade, technology can give customs inspectors the tools they need to enforce existing bans,” he said.

“Limiting the global wildlife trade is going to take global action. We are just getting started.”