A groundbreaking new effort could greatly expand our knowledge of where the wild things are.

Placed by researchers in forests and natural areas around the world, motion-detector cameras — known as “camera traps” — snap thousands of photos a day of animals rarely seen by human eyes. These unwitting selfies have provided scientists an unequaled view into the homes (and habits) of wildlife. 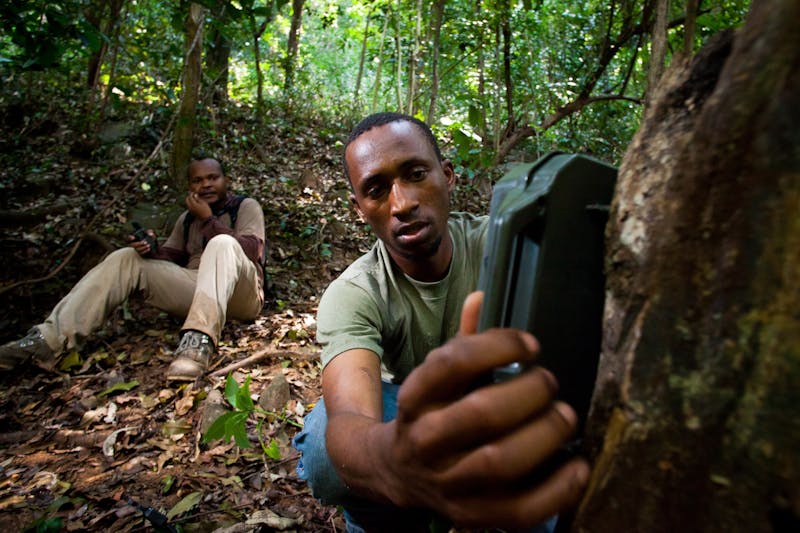 A researcher setting up a camera trap in Udzungwa National Park. ( © Benjamin Drummond)

This data is critical to crafting smart policies for wildlife conservation, according to Jorge Ahumada, a scientist at Conservation International.

But there’s a downside to having all this data, he says: It’s not being shared.

“Technology has made it very easy to collect this data, but we don’t have access to it,” Ahumada said. “There are camera traps everywhere and millions of camera-trap images out there. But most of those images are sitting in people’s computers and databases. It’s a major lost opportunity for conservation.”

That is all about to change, thanks to Wildlife Insights, a cloud-based platform operated in partnership by Conservation International, the Smithsonian's National Zoo and Conservation Biology Institute, Wildlife Conservation Society, The North Carolina Museum of Natural Sciences, World Wide Fund for Nature, the Zoological Society of London, Map of Life and Google and implemented by Vizzuality. The new platform will enable researchers — and literally anyone else — to view, share and analyze camera-trap data and images.

Camera traps have already revolutionized conservation, says Ahumada, who knows a thing or two about tracking species from his early days as a field biologist studying spider monkeys in Colombia.

“Everyone who has studied monkeys in tropical areas knows that this involves long hours of walking, encountering every possible imaginable creature except the monkeys you are studying,” he said.

One day out in the forest, he saw something he’d never seen before.

“There were two of them — they looked like small dogs, with short ears, short tails and a flattened snout,” he said. “They ran off as soon as they smelled me.” He returned to camp excitedly, telling colleagues what he had seen.

“Nobody believed me,” he said, laughing.

Thirty years later, Ahumada was reviewing camera trap data from a site in the Peruvian Amazon when an image caught his eye.

“Guess what I see? These two dogs,” he said. 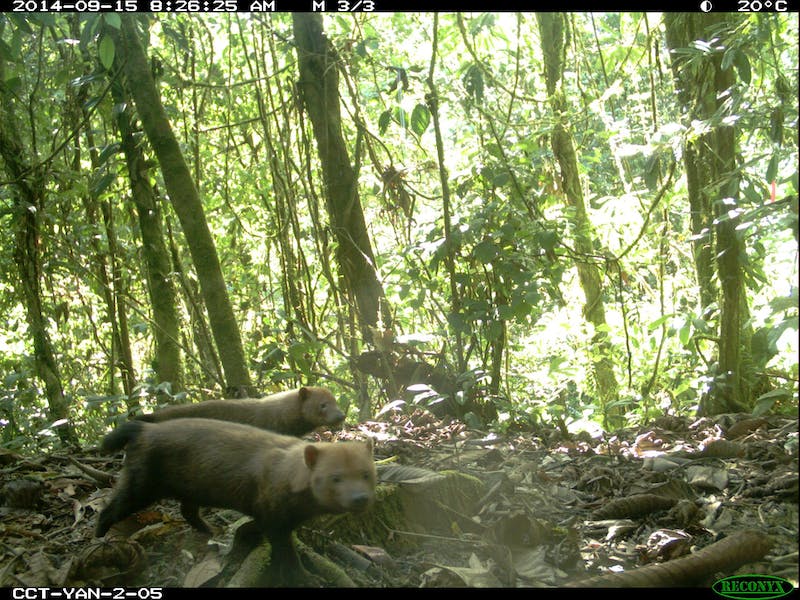 What Ahumada had seen three decades earlier was extremely rare.

These small animals are called bush dogs (Speothos venaticus). About the size of a medium dog, they are known to hunt in small packs, and although their geographic range is very large (Panama to southern Brazil), they are rarely seen — of 700,000 camera-trap images taken within bush dogs’ range, only 260 of them are of this species, Ahumada says.

Even these relatively few documented sightings — equal to 3 in every 10,000 identified images — provide just enough data to study these animals.

“Data is critical,” Ahumada said. “Otherwise we are relying on anecdotes.”

Knowing whether a particular species is at a particular place at a particular time — and not going back later to see if it is still there — doesn’t tell you anything about what’s happening to the species, Ahumada says. By tirelessly monitoring patches of forest, he says, camera traps help to solve this problem.

But their ability to create data is only as useful as humans’ ability to sift through it.

“This is one of the main reasons people don’t share data — it’s very difficult to process it,” Ahumada said. “You end up with thousands of images, and you have to look through each one, manually. It’s very tedious.”

Furthermore, while many camera-trap projects are designed to study one or a few specific species, camera traps don’t discriminate, mindlessly snapping candid shots of any critter that comes into view. Much of the data on this “by-catch” are never shared, depriving other scientists of the opportunity to see or analyze it.

Wildlife Insights offers a crucial incentive for persuading scientists to share their photos: unrivaled processing power. Working with Google, the platform has developed machine learning algorithms to automatically identify and tag species — even repeat images of the same animal, in some cases — far faster than any researcher can.

The new platform’s culture of sharing extends beyond just data: any tools and other add-ons will be shared, Ahumada says, as well as the camera-trap photos themselves, under Creative Commons licenses.

There are some notable exceptions, however. Users will be able to place their data under embargo for a limited time if that data is being used for yet-to-be-published research. Additionally, the exact locations of commercially hunted and endangered species will be obscured to prevent digitally savvy poachers from using the data for illegal purposes, which is discussed in Ahumada's recently published research.

Wildlife Insights can be useful for just about anyone, Ahumada says.

Indigenous communities that depend directly on wildlife — and the “ecosystem services” that those wildlife provide, such as pest control and pollination — can monitor animals in a new way. Managers of protected areas or anti-poaching programs can gauge the health of specific species. Governments can use wildlife data to inform regulations or legislation. Businesses can use the data to assure that they are responsibly managing the impacts of their activities on local environments. 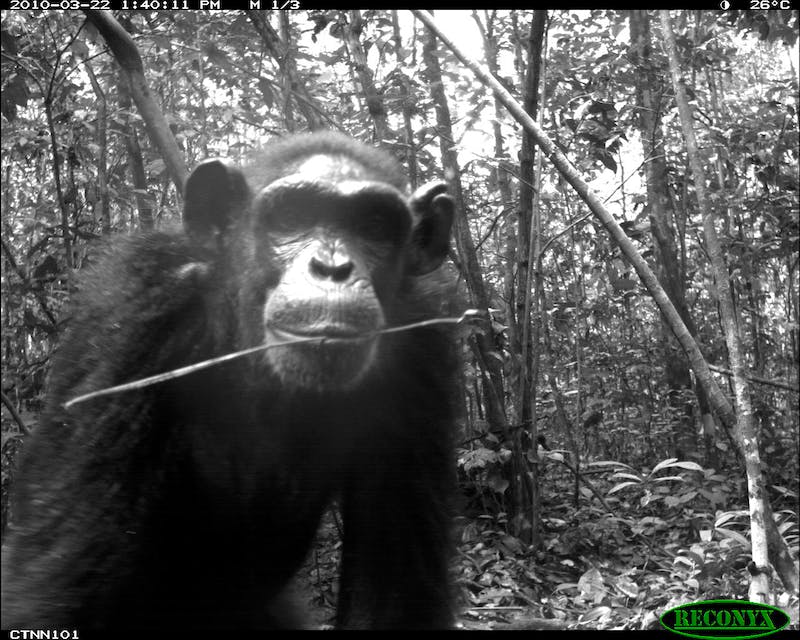 One of TEAM's camera traps in the Republic of Congo caught a photo of a chimpanzee. (Courtesy of the TEAM Network)

But for Ahumada, the fact that the public can use Wildlife Insights is especially important.

“We want citizen scientists, teachers and children to use this platform,” he said. “These are the future generations who will benefit from wildlife conservation.”

The platform is the next evolutionary phase of the Tropical Ecology Assessment and Monitoring (TEAM) Network, a partnership formerly led by Conservation International that placed camera traps throughout tropical forests. TEAM will continue to generate data, Ahumada says, that will now live on the Wildlife Insights platform.

“TEAM used to be the largest public camera-trap database in the world,” he said. “Now it’s a small part of something much bigger.”

The goal is the same, he says, but the ambitions — and opportunities — are larger.

“The ultimate goal of this effort is to help stabilize and recover global wildlife populations,” Ahumada said. “Once we have it, we can use it for conservation and on a scale that is relevant — not just at the scale of a protected area, but at the scale of a country or a region.”

To coincide with the launch of Wildlife Insights, Google released a short documentary film that tells the story of a camera trapper at Colombia’s Alexander von Humboldt Biological Resources Research Institute who is using Wildlife Insights to document and preserve the biological diversity in Caño Cristales, the country’s remote upper Amazon region. Watch the film here.

Google has also released a background video on how Wildlife Insights was developed. Watch the video here.