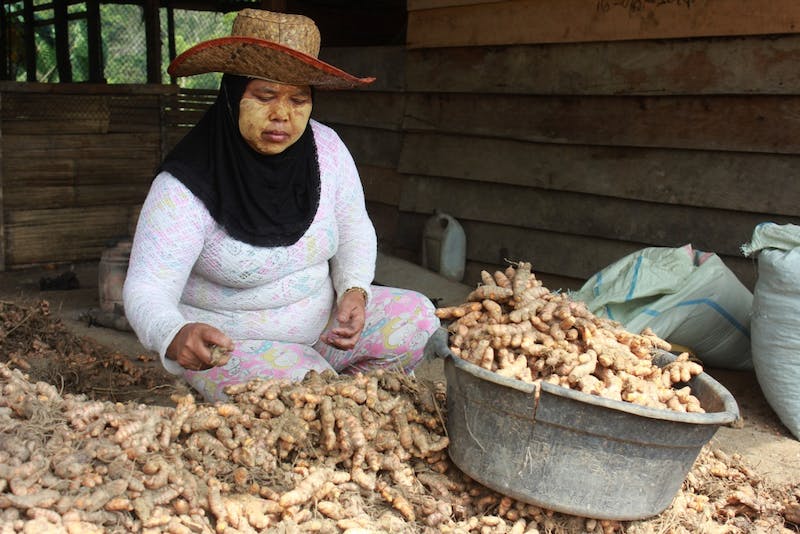 Editor’s note: To meet global food demand by 2050, production will have to increase by 60 percent, the FAO reports — yet agriculture is already a major source of deforestation. To meet humanity’s food needs, we must use land more sustainably and productively. One solution with potential is agroforestry, a practice that integrates trees and shrubs into traditional agricultural systems to create benefits for nature, people and the economy.

When Lela Kabeakan, the chief of Surung Mersada village in North Sumatra’s West Pakpak district, looks at her cultivated plot of land, the future of her children is the first thing that crosses her mind.

While she earns her livelihood by running a small store selling fertilizer and seeds, she was raised in a farmer’s family and today the mother of three boys keeps a 1.5-hectare (3.7-acre) plot of land in her village. “I started by planting crops such as rice, ground nut and ginger,” Kabeakan explained. “We’ve just finished harvesting corn, turmeric and Bogor nut.” 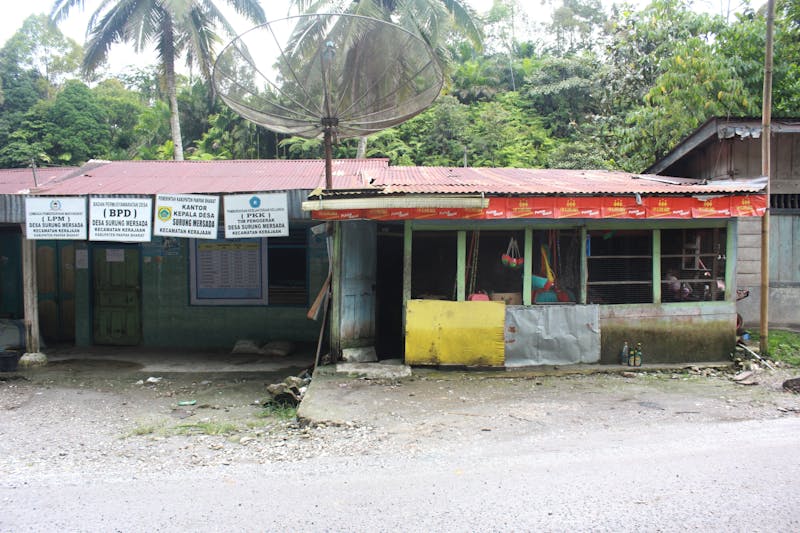 For years, Kabeakan practiced a planting method known as tumpang sari , or intercropping, which is the practice of combining different crops for optimal use of land. Intercropping tends to boost a household’s economy because it reduces the need to rely on any one crop for income.

Yet in practice, this method can also damage forest areas. The range of crops quickly absorb nutrients, which means farmers have to continuously move from one location to another seeking fertile land. In Kabeakan’s village, where forest makes up more than 70 percent of the total area, this rotational farming method poses major threats to the forest and the village that relies on it. Without as many trees to soak up rainfall, the land becomes more susceptible to flooding and landslides. In addition, cutting down trees releases carbon into the atmosphere, contributing to global climate change and perpetuating impacts that are already making farming more difficult for many Indonesians. 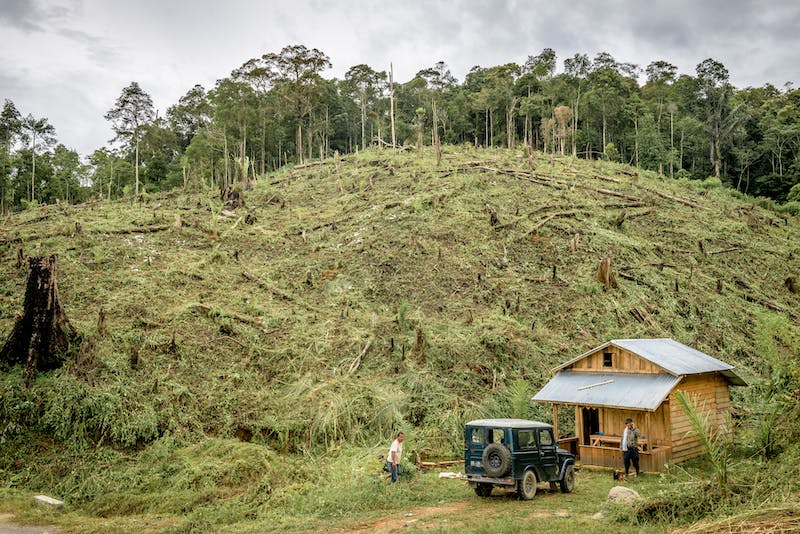 Fortunately, there is an alternative environmentally friendly agricultural method that does not force the villagers to keep cultivating new land: agroforestry. The practice combines older, slow-growing crops with younger, quickly maturing crops — all in the shade cover of existing forest, which helps protect the plants below.

For experienced farmers like Kabeakan and her fellow villagers, this practice is very easy to understand; it is a more environmentally friendly version of the intercropping method. By maintaining organic matter in the soil, agroforestry reduces the amount of nutrient loss, allowing farmers to maximize the productivity of their crops on the same amount of land and thus reducing the need to convert more forest to farmland. In this way, the farmers can ensure the long-term sustainability of agriculture as the villagers’ main source of income while the standing forest continues to benefit the community through water provision, erosion prevention and other services.

As part of the Sustainable Landscapes Partnership, a collaboration with the Walton Family Foundation designed to foster low-carbon development, CI is working with farmers in the West Pakpak district to encourage them to adopt agroforestry practices.

After learning about the opportunities offered by agroforestry in a CI training workshop, Kabeakan successfully convinced 16 other female farmers in her village to join her in adopting it. In Surung Mersada, women have an equal role to men in managing and protecting their lands. Their knowledge about which forest trees are most important for income helps inform which trees in agroforestry systems are left standing. 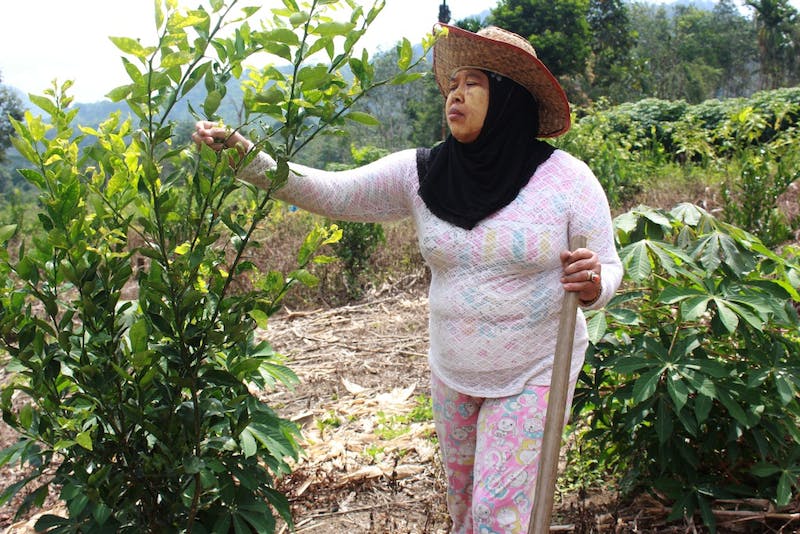 Lela Kabeakan prunes leaves affected by pests on one of her orange trees. (© CI/Syaiful Purba) 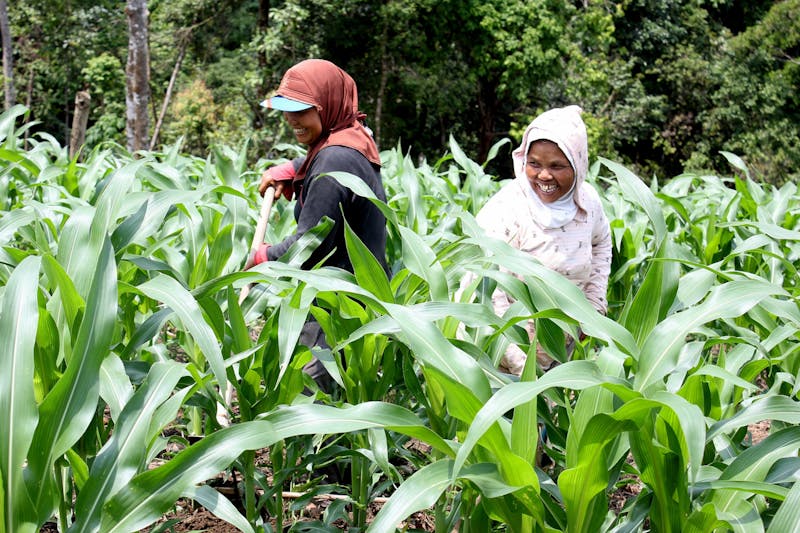 Under Kabeakan’s leadership, the farmers planted mature trees on their plots, interspersing them with other crops that are two to three years old. They also planted quickly maturing crops such as corn, which could be harvested in just three to four months. To tackle the issue of land fertility, Kabeakan asked the farmers to participate in CI’s training program to learn how to produce various kinds of organic fertilizer. Since then, the women have made several kinds of fertilizer and applied them to their farms’ young crops.

For Kabeakan, agroforestry provides an answer to her dream for her children’s future: a healthy environment and a profitable livelihood. Today, her plot has many kinds of trees, such as durian, petai and jengkol, as well as 400 one-year-old orange trees. In June 2016, Kabeakan and her female farmers’ group earned additional income for the first time from selling the corn they recently began growing. Kabeakan used the money to support her children’s education, household needs and to buy more crop seeds for her land.

“Being introduced to agroforestry has changed the cultivation method on my plot, as I realize it’s a better system to use land,” Kabeakan reflected. “By using this system, we can have an area for fast-growing crops for harvesting now, as well as other areas for the future.”

Syaiful Purba is the field project coordinator for CI Indonesia.