These women protect the trees that protect Ecuador 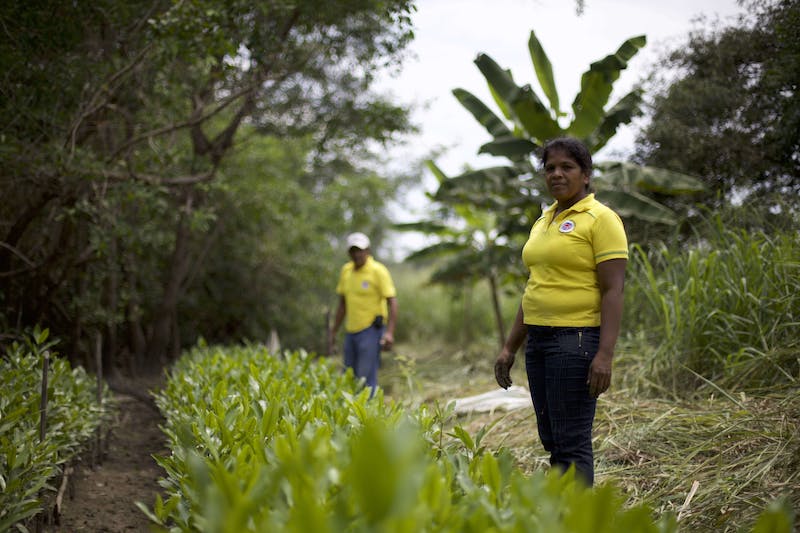 Crab seller Teresa Mendoza (right) is a member of the 6 de Julio Association, which grants her access to the community’s mangrove concession in coastal Ecuador. She and the five other female members make up less than four percent of the group’s membership. (© Diana Troya)

Editor’s note: At the U.N. climate change negotiations underway in Marrakech, Morocco, determining how to protect and restore coastal ecosystems for storm surge protection and carbon storage is a high priority for vulnerable countries. But as this story explains, when it comes to communities residing near these ecosystems, these benefits are just the beginning.

One hectare of them can store up to seven times as much carbon as a hectare of tropical forest. Standing strong on the muddy shores of the Gulf of Guayaquil, they can reduce the force of waves pounding the shore by 98 percent. Their trees provide habitat for many rare and threatened species, as well as more plentiful, lucrative ones like the red crab, an important source of sustenance and income for coastal communities.

These are Ecuador’s mangrove forests, which cover about 157,000 hectares (388,000 acres) in the floodplain where the South American country’s coast meets the Pacific Ocean. Despite all the benefits mangroves provide to coastal communities, Ecuadorian mangroves have experienced huge losses in recent decades as many acres were converted to shrimp ponds. To reverse this trend, Ecuador started a mangrove concession program that grants communities exclusive rights to use nearby mangrove areas for fishing, tourism or other livelihood needs. The program has enabled thousands of traditional mangrove users to continue their way of life. 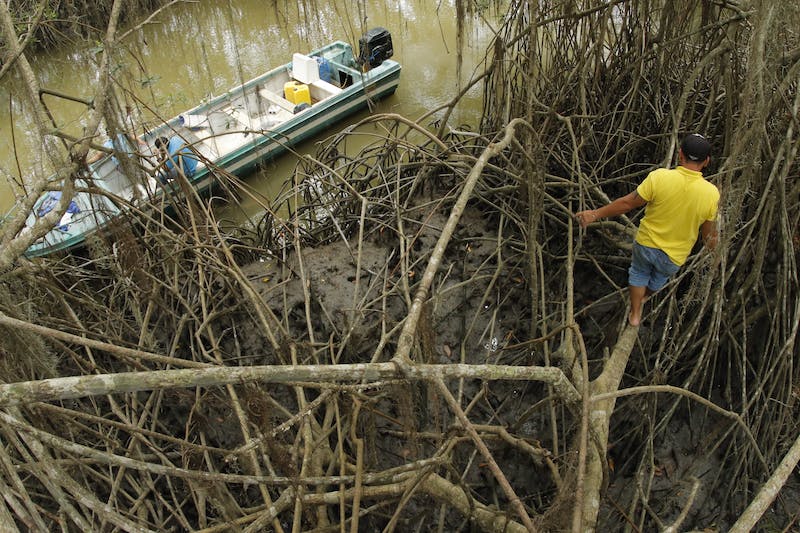 Teresa Mendoza (right) and other women from the 6 de Julio community in coastal Ecuador work together to remove meat from crabs caught in the mangroves. By working together, the women are more efficient at processing the crabmeat and distributing it to clients — and take home more money at the end of the day. (© Diana Troya)

A resident of the town known as 6 de Julio, Teresa Mendoza is a member of the 6 de Julio Association, which grants her access to the community’s mangrove concession. She and the five other female members make up less than four percent of the group’s membership.

Being in the minority has not stopped Mendoza; rather, it has given her the drive to fight for the same rights and respect as the men. Previously, each of the group’s female members were individually processing crabmeat and converting it into pulp in their own homes. Mendoza gathered these women together, and after some training by the U.S. Agency for International Development on proper hygiene practices they created their own crab pulping business. By working together, the women are more efficient at processing the crabmeat and distributing it to clients — and take home more money at the end of the day.

Access to mangrove resources has improved these women’s livelihoods, allowing them to have their own independent income and provide for their children without relying on a spouse or other family members. Mendoza is currently treasurer of the association, and two other women also have leadership roles. Since the association’s creation, the high quality of their crabs has gained a reputation across the country; in 2015, Mendoza served crab produced by 6 de Julio to Ecuadorian President Rafael Correa.

All of this success has come with challenges. When Mendoza was first elected treasurer, she had trouble enforcing rules with the association’s male members. But Mendoza persevered, and has even made some significant improvements in the way members pay their fees. Now she says, because of the mangroves, “Yo soy libre” — “I am free.” 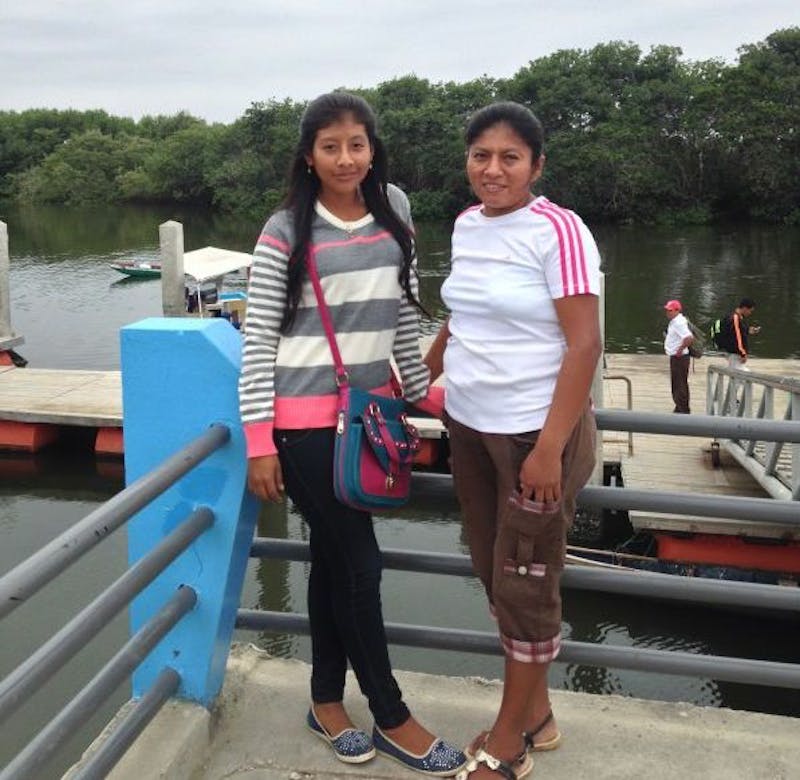 Mayra Lino (right) with the secretary of her family’s tourism company. (© CI/Elizabeth Guinessey)

For Mayra Lino of the El Morro Concession southwest of Guayaquil, mangroves are a source of life, work and daily sustenance. For these reasons, it is important to her that they are conserved and managed properly.

Lino grew up among the mangroves, but only started working in them in 2001 when she married her husband, who owns a small, community-based tourism company. She received a naturalist license through the Ecuadorian Ministry of Environment and has been working as a tour guide ever since. Lino’s boat tours leave out of the small port of Puerto El Morro and make their way through winding mangrove channels, offering visitors the chance to see abundant wildlife such as frigate birds and dolphins along the way.

On a typical tour, as the boat travels through the estuary, Lino introduces the area and explains the importance of the mangroves to the people living in El Morro and to the different species that thrive in the mangroves. She explains that mangroves are where crab, cockles and numerous fish species such as mullet are caught. In fact, red crabs feed on organic matter found only in mangrove soil, and spend most of their time deep in muddy holes on the banks of mangrove forests. For a number of the tourists, the boat tour is their first-ever encounter with mangroves; many are surprised to learn that the main ingredients in their ceviche come from coastal forests like this.

When Lino first began working as a tour guide, there were not many other women doing this kind of work. However, over the years the dynamic has changed, and today there are more female guides than male. Lino can see positive changes in these women — critically, that they have the same rights as the male tour guides. Part of a true “family of the mangrove,” Lino’s daughter also works as a boat tour guide. To Lino and her family, the mangrove is an indispensable, life-giving resource and she invites everyone to come and get to know “her” mangrove forest. 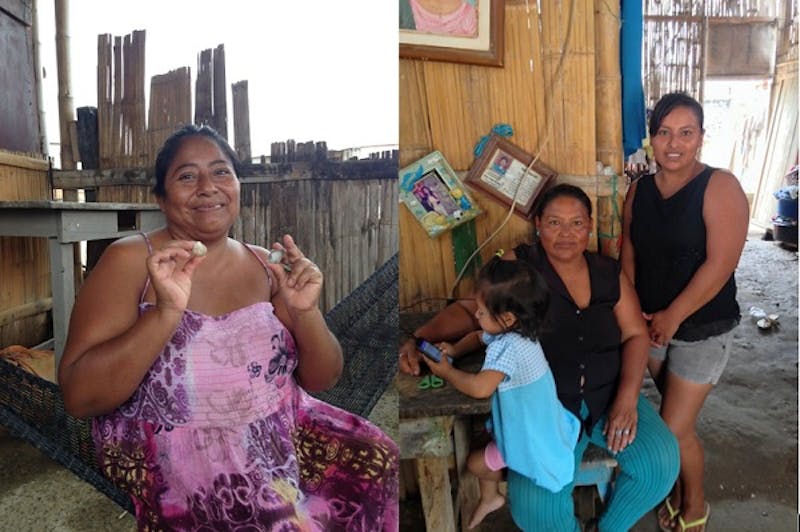 About a quarter of the El Morro community dedicates themselves to the collection of red crab and various species of cockles, or saltwater clams. While the field is largely dominated by men, a small group of women — including Garcia, Mite and Cruz — can also be found in the mangroves at low tide, collecting smaller species of cockle.

Garcia’s parents first taught her how to collect cockles in the mangrove when she was eight years old. The first time she went out into the muddy mangroves was challenging, but she quickly became used to the harsh work environment. Today, Garcia loves having an excuse to get covered from head to toe in mud. The income that she gets from collecting cockles pays for lunch for her family of four all week.

Mite considers the daily trip to the mangroves to collect cockles as a family tradition that brings her immense pride. People from outside the community are often surprised to hear that women are also out in the mud collecting cockles, but for Mite there is no reason why women are not just as capable of this job as men. Her daughter, Cruz, first went out into the mangroves with her father at age 14, where he taught her how to navigate the muddy terrain. The trips to the mangroves now provide Cruz with the income she needs to support her two young children.

Many of the female cockle collectors in El Morro head out together in canoes, singing the whole way there and back. They are friends who enjoy their time spent out in the mangroves. When out as a group, time goes by quickly and the women return with the tiny cockles that translate into money in their pockets.

Some of the other women in the community are afraid to go out into the mangroves, fearful of the canoe ride or of navigating around the mangroves. For Garcia, Mite and Cruz, there is no fear; for them the mangroves are a symbol of their control over their own fate.

Elizabeth Guinessey was a Trott intern for CI Ecuador in the summer of 2016.