News spotlight: Could seaweed be our new big climate ally?

Kelp forests are one of the fastest growing ecosystems on Earth — yet because they thrive out of reach of mapping satellites, scientists’ understanding of them has been stymied, Lucy Sherriff reported for the Guardian.

“Most of the world’s seaweed forests are not even mapped, much less monitored,” marine ecologist Karen Filbee-Dexter told the Guardian.

A recent study, led by an international group of scientists including Filbee-Dexter, reveals that underwater forests are much more prolific than previously thought, covering up to 7.2 million square kilometers (2.8 million square miles) — an area twice the size of India.

The implications could be significant.

Namely, Sherriff writes, the research helps scientists better understand the role kelp and other seaweed forests could play in stemming the climate crisis by absorbing planet-warming carbon dioxide from seawater and the atmosphere. 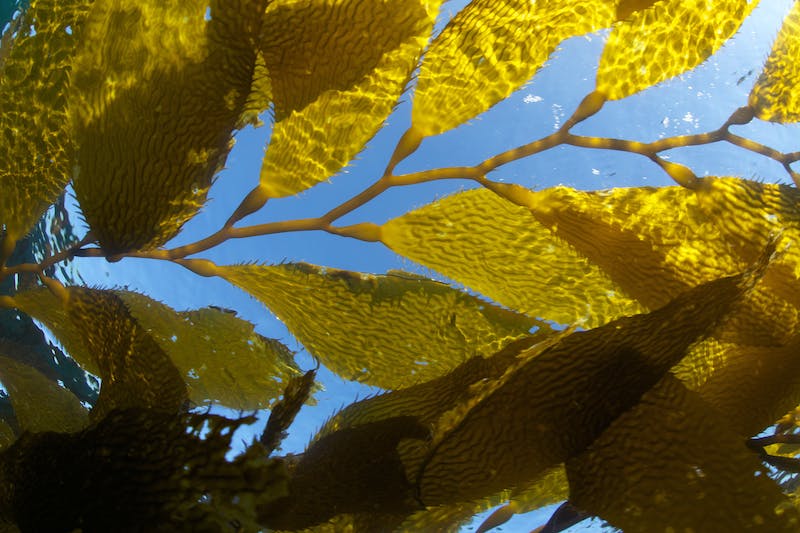 Kelp off the coast of Monterey, California. © Keith A. Ellenbogen

By at least one estimate, kelp forests may store as much carbon as the Amazon rainforest. But there’s been scientific debate on these forests’ long-term ability to sequester carbon because unlike other ecosystems that stash massive amounts of carbon — such as mangroves — kelp lacks root systems to lock carbon into the ground.

Filbee-Dexter told the Guardian that the research was a “major step forward” in understanding seaweed’s role in mitigating climate change, “because it calculates the productivity – growth and carbon uptake – of the largest marine vegetated ecosystem.”

In addition to absorbing massive amounts of carbon, kelp forests play an important role in marine ecosystems. Scientists have found that as grey whales migrate from Mexico to Alaska they use massive curtains of kelp as a haven from killer whales. And, kelp could even be a boon to food security: The study finds that given its rapid growth, seaweed, if properly harvested, could become a “very sustainable and nutrient-dense food source.” 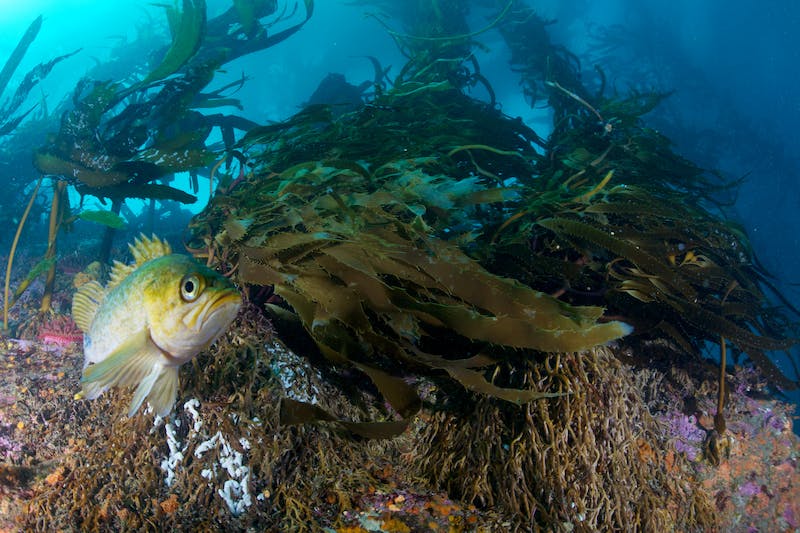 Kelp forest off the coast of California. © Keith A. Ellenbogen

Still, like many biodiverse ecosystems, underwater forests face unprecedented threats in the form of rising sea temperatures, pollution and invasive species. Climate change has created a dangerous domino effect, where one change in the ecosystem can set off a vicious cycle. Take Northern California’s coast where kelp has declined by 95 percent due to an explosion of sea urchins, which in turn was caused by the decline of their main predators, starfish, due to a disease tied to warming waters.

Filbee-Dexter told the Guardian she hopes that “more awareness about these [underwater] forests will lead to more protection and restoration.”

With the world’s oceans becoming hotter and more acidic, the time to turn the tide is dwindling. Last month, the U.N. biodiversity summit, or COP15, reached a historic agreement to protect 30 percent of terrestrial, inland water, coastal and marine ecosystems by 2030.

The Blue Nature Alliance, a coalition co-lead by Conservation International, is supporting the global goal.

Working alongside local communities, governments, Indigenous peoples and ocean experts, the alliance has engaged in advancing the conservation of more than 4.8 million square kilometers (1.9 million square miles) of ocean across Fiji, Antarctica’s Southern Ocean and Tristan da Cunha — the most remote inhabited archipelago in the world. In each of these places, the alliance collaborates with communities and governments to identify their conservation goals and help implement strategies to achieve them.

Read the full story from the Guardian here.