‘My Africa’ field notes: Portraits of hope for Africa’s elephants

Editor’s note: On April 20, Conservation International will release its new virtual reality film, “My Africa,” at the Tribeca Film Festival in New York, with a world release on April 30. The film tells the story of a young Samburu woman in Kenya whose community is working to save elephants, reknitting an ancient coexistence between people and wildlife. In anticipation of the launch, Human Nature is highlighting stories about the people, places and wildlife of “My Africa.”

At the Reteti Elephant Sanctuary in Kenya, photographers working with Conservation International and its partners capture remarkable scenes that remain seared into our minds. The sanctuary is the first elephant orphanage in Africa owned and operated by the local community, which provides income and jobs for the region. Through a partnership with Conservation InternationaI, Reteti focuses on rescuing injured and orphaned elephants and returning them to the wild when possible in a world where elephants are threatened by ivory-seeking poachers and other forms of conflict.

Here are some of our favorite photos taken at the sanctuary, with stories about the elephants and the caregivers who look after them. 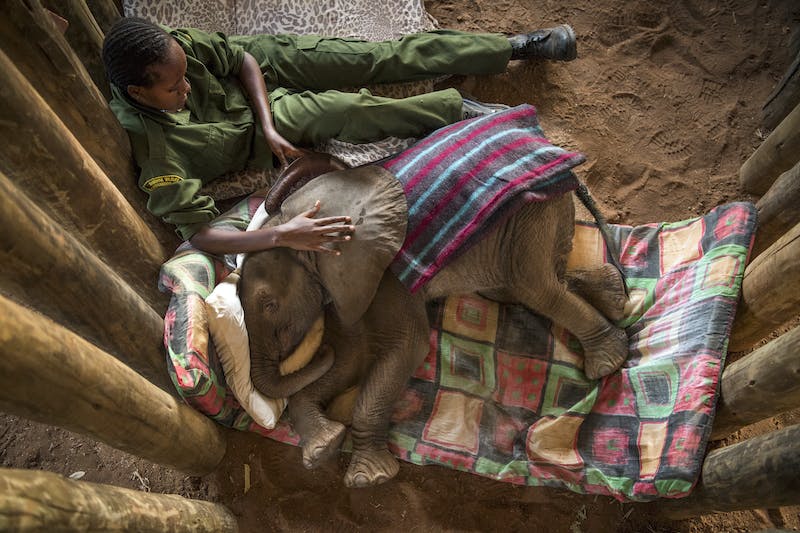 The Reteti Elephant Sanctuary rescues orphaned elephants from across northern Kenya. These baby elephants have fallen into wells, been abandoned by their herds, come into conflict with humans or were left orphaned by poachers. Working with partners from the Northern Rangelands Trust, Kenyan Wildlife Service, Conservation International and others, Reteti rescues these elephants from the wild, protects them, feeds them during a critical stage in life and trains them for eventual release back to the wild. The sanctuary is owned and staffed by the local Samburu community. Care of the elephants is a full-time, all-consuming job for many keepers. 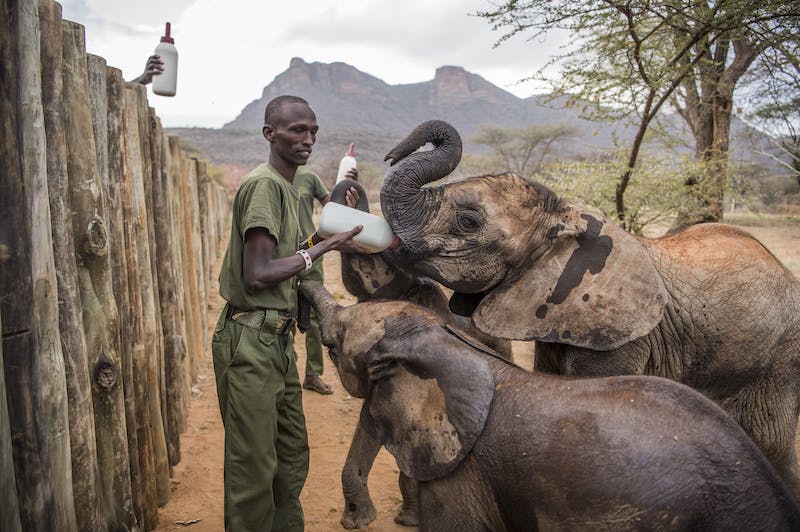 The core of Reteti’s program is bottle feeding. Most of the sanctuary’s elephants are too young to browse on vegetation in the wild. That means elephants must be fed eight times a day by trained keepers using specially developed formulas to ensure adequate nutrition and to minimize distress with the elephants’ sensitive stomachs. A mother elephant’s milk changes in constitution as she weans her baby. During the initial teething process, one of the most stressful phases for a baby elephant, the milk changes to include anti-inflammatory and antibiotic properties that help the young elephant. During this time, a mother’s behavior will change, selecting certain plants that provide these characteristics. To mimic these cycles, Reteti adjusts formulas for each of its elephants, providing a different mixture of proteins, fats, vitamins and other ingredients to each elephant every day. “A lot of precision and a lot of care goes into this,” says Katie Rowe, manager of Reteti. “We don’t have a project if we don’t get this right.” 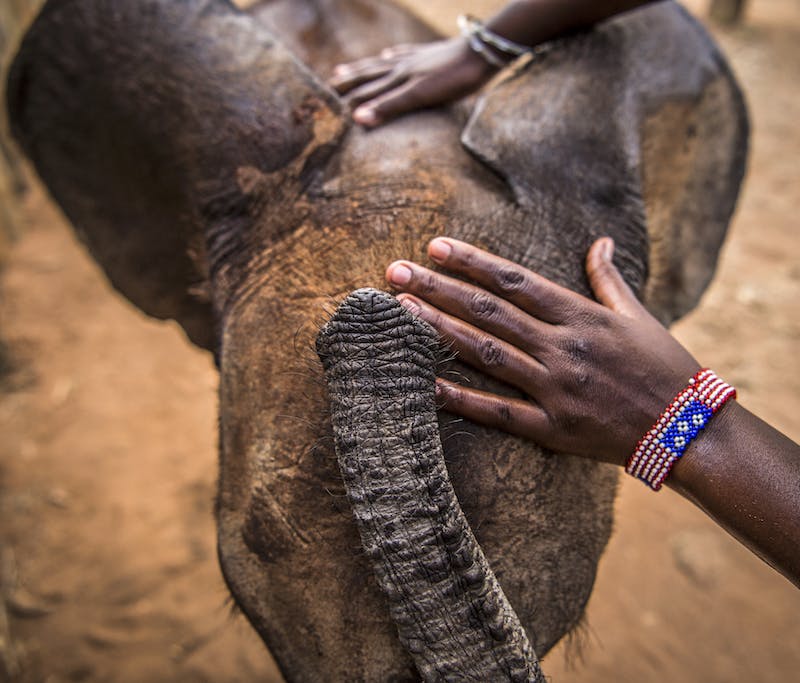 One of the elephants that was rescued by Reteti Elephant Sanctuary. (© Ami Vitale)

Keepers at Reteti are selected from the local Samburu community, who use their traditional knowledge as nomadic herders to care for the elephants. According to Rowe, little training is needed given the Samburu’s deep and intuitive familiarity with animals and with the land. “With elephants, if you feel there is a problem, you have to act on it straightaway,” Rowe said. “If you’re seeing the problem, it’s too late.” For Mike Learka, a keeper with Reteti since its founding, the job at Reteti provides stability for his entire extended family. In dry years, when cows die, income from Reteti helps to see the family through to the next season. “This is what I plan to do for the rest of my life,” he says. “This is my life’s work, to see this project grow.” 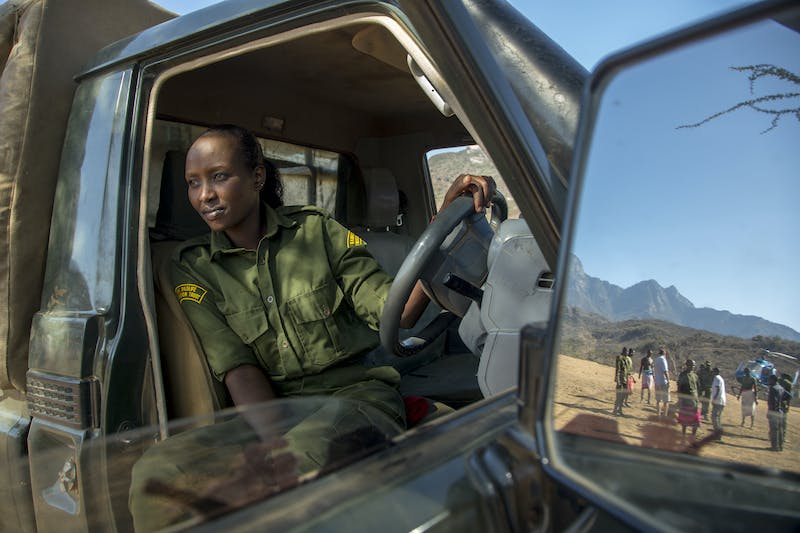 Dorothy Lowaktuk first heard about Reteti from the male elders of her tribe. At first, they presented the job as only suitable for men. But with her knowledge of traditional remedies from indigenous plants, she quickly became a valuable member of the team. This deep local knowledge makes the veterinary formulas used at Reteti unique in the world. It is an indigenous recipe specific to northern Kenya, with roots deep in Samburu herding culture. For Lowaktuk, it is also a springboard to a new future. “I am happy now that I can do some things I never thought I could do,” she says. “We do the same work as the men do. It makes me very proud.” 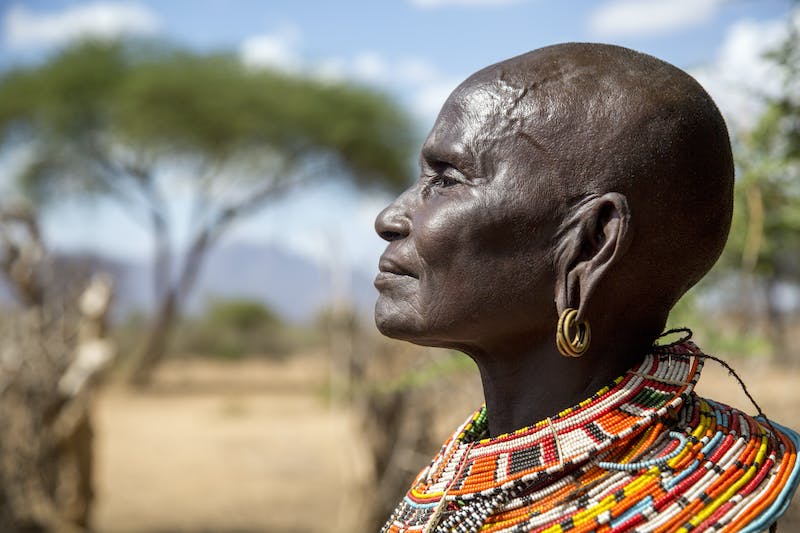 The Samburu people in Kenya are known for their tradition of beaded necklaces and nomadic lifestyle. The Samburu’s connection to the land is remarkable. As nomadic pastoralists, many communities still live only with what they can carry from place to place, following seasonal forage for their livestock. But this way of life faces erosion from the pressures of the outside world. As Samburu adolescents attend school, some feel pulled to move to the city to find a job or continue their education. With Reteti, Samburu youth can go to school and find a job in their community. “With projects like this, they’re able to have employment without leaving their communities and traditions behind,” Katie Rowe says. 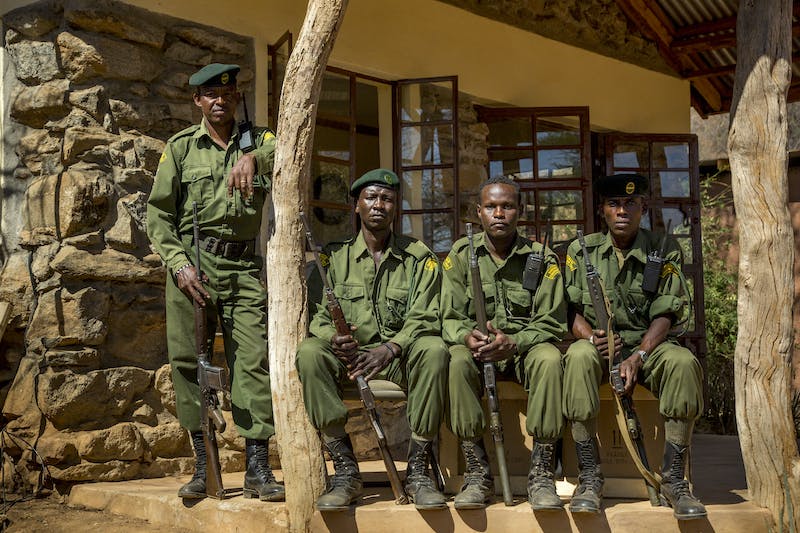 Through a partnership between the Northern Rangelands Trust, the Lewa Wildlife Conservancy and Conservation International, anti-poaching teams patrol the conservancies of Kenya’s northern rangelands with a broad, community-serving mandate and are trained as national police reservists. In addition to their wildlife protection duties, teams investigate livestock theft and provide security to the villages. The model has been a resounding success: Lewa has not lost an animal to poaching since 2013. Anti-poaching teams now catch poachers as far away as 100 kilometers from the conservancy, turned in by the local community. “I don’t have to call someone in the village to ask about something. It’s them who are calling us in here,” says John Pameri, head of general security at Lewa. “To succeed, you need to work with communities. Even if you have 10,000 men on the ground, 100 aircraft, if you don’t work with communities, then you lose.” 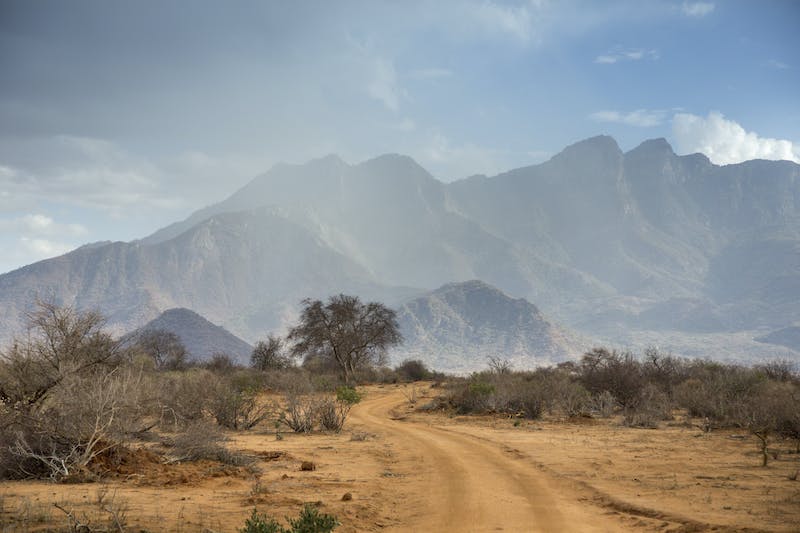 The roots of partnership in this region stretch back decades. According to Ian Craig, director of conservation and founding member of the Northern Rangelands Trust, that longevity has been key to success. “My big lesson in conservation is continuity. When you drop in to save this and that, it’s difficult. To be successful, we must invest in long-term, trusted relationships.” To Craig, working in the areas between parks is critical to preserving species for the future. “In Kenya, 70 percent of wildlife are on community lands,” he says. “If these communities are not empowered, wildlife will not succeed. My dream is that conservation becomes the norm on community land — not as a special program to save a species or include a community, but rather as an everyday business based on how people perceive and value nature in their lives.” 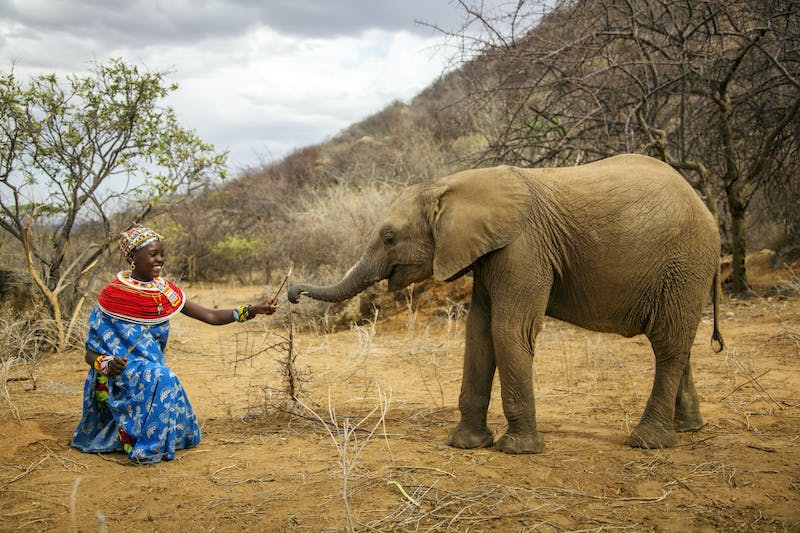 Naltwasha Leripe with an elephant in Northern Kenya. (© Georgina Goodwin)

In “My Africa,” a young Samburu woman, Naltwasha Leripe, takes viewers through her community’s daily life, tending livestock, digging “singing” wells deep into dry riverbanks and rescuing a baby elephant orphaned by a poacher’s gun. With the film’s release, audiences everywhere will have the chance to experience this remarkable place in virtual reality and to support the communities working to save elephants for us all.

“My Africa” was produced with the support of The Tiffany & Co. Foundation and in conjunction with Passion Pictures and Vision3. Additional support for distribution was provided by glassybaby.