To save elephants, it takes a village

Kenya’s Reteti Elephant Sanctuary — the first community-owned elephant sanctuary in East Africa — provides a place for injured elephants to heal and a home for elephants orphaned by poaching.

Through a partnership with Conservation InternationaI, Reteti focuses on rescue and return where possible, with the goal of reuniting calves with their mothers within 48 hours.

Answer: Reteti is a community-owned effort — with all employees coming from the local Samburu community — to save a critical species. But Reteti isn’t just about saving elephants; it’s about breaking down stereotypes and redefining wildlife management. For instance, Reteti provides new employment opportunities for women and those who haven’t gone to school. Most of our keepers, or caretakers, were not able to attend school, and thought that their only future was as a pastoralist driving livestock. Now they can get a job at Reteti, where their intimate knowledge of nature is an asset.

Reteti is also changing the way communities view the wildlife around them. When people realize that they can benefit from healthy elephant populations, they’re proud to take care of wildlife. Not to mention that this has never been done before — we’re pioneering a new model where a community is taking it upon themselves to raise and “re-wild” elephants in a community-owned landscape. 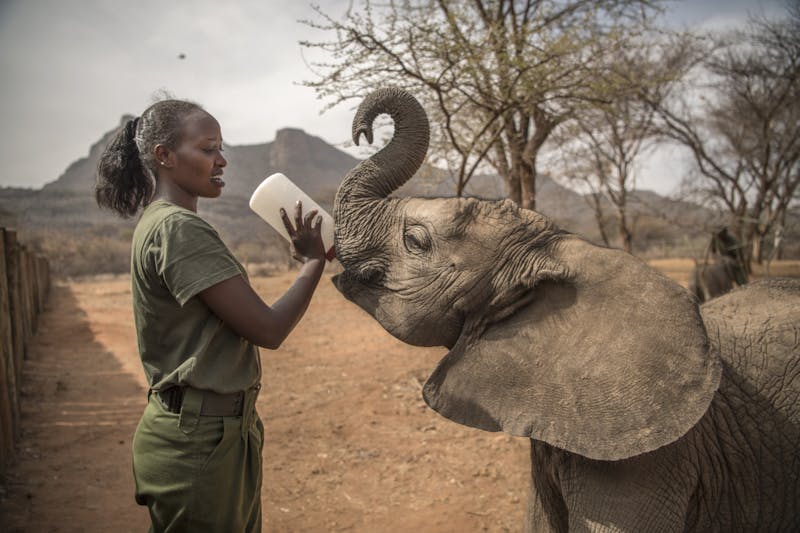 Q: Where did the idea for Reteti come from?

A: The idea for a sanctuary came out of community conversations. Over a period of two years, we had a series of meetings with the Samburu tribe and other stakeholders to raise awareness of the benefits that healthy elephants could bring to the area: employment, education and security. Continued dialogue resulted in full buy-in from the community, with the understanding that caring for elephants would improve their livelihoods. It didn’t make sense for orphaned elephants to be taken to another area and rehabilitated, when keeping them here provides jobs and generates tourism revenue. Elephants also improve nearby grasslands, where herdsmen graze their cattle, by dispersing seeds through their dung.

Q: How does the community benefit?

A: Reteti is working with young Samburu women to be the first-ever women elephant keepers in all of Africa. At first, the community didn’t think there was a place for women in the workplace. Now, the success of these women elephant keepers is unlocking new possibilities, setting a powerful example for young girls hoping to pursue their dreams. It’s also changing how the community relates to elephants. Schoolchildren who have never seen an elephant before or who were afraid of elephants visit Reteti and experience these elephants up close, and they realize they can grow up to be a veterinarian or an elephant keeper.

Q: What does a typical day look like at Reteti?

A: Right now we have 35 staff caring for 10 elephants, which need 24-hour oversight. For many employees, this is their first job. Our keepers are a support system for the elephants, working in shifts and hand-feeding elephants with bottles to make sure they get the food they need throughout the day and night. Every morning, they take the elephants for walks, where the elephants spend most of their time in the wild grazing in the bush and chasing guinea fowl. In the heat of the day, they take mud baths before coming back to the sanctuary and getting fed again. It’s a fine balance between giving elephants space and time to do what they should be doing as elephants, but to also be in tune with an elephant’s needs and behavior so that the keepers know when they need to step in and take a more active parental role.

Q: Why ‘rescue and return’?

A: Taking elephants to the sanctuary is a last resort. Our staff responds to reports of elephants in trouble, such as a 3-week-old elephant calf that recently fell into a deep “singing well.” These manmade watering holes, named after songs that each herdsman sings to call his cattle to drink, also attract wildlife that sometimes fall in and get stuck while trying to take a drink. The Reteti team rescued the calf from the well and waited for its mother to return. Thankfully, as the sun went down, the calf’s herd approached the well, and the keepers released the calf back to its family.

Q: Reteti recently celebrated its first anniversary in September. What has the sanctuary accomplished?

A: We’ve rescued 30 elephants since we started. But our successes are also measured in change in behavior. Not so long ago, elephants were seen as giant pests for collapsing sandy watering holes where cattle drink. Now, the community is so proud of this project. When I see community members, people ask me how each elephant is doing by name. Since there’s such strong involvement, the community really wants to see these elephants do well. When we’ve lost elephants, everyone feels the heartbreak; when a calf has made it through a tough time, everyone celebrates.

Q: What has driven the change of heart?

A: Employment alone has a huge impact; the income from one job at Reteti ripples out to family members. Through talking to our staff, we’ve gained an understanding of just how many people rely on their salary. For instance, our elephant keepers have explained to us that they are paying for their brother’s children’s school fees, or that they need to send money to their parents and their brothers and sisters, who then share it among their kids.

Reteti is also helping to protect the remote Mathews Mountain Range by raising awareness of how critical elephants are as a keystone species and showing people that they can coexist peacefully with wildlife. The Samburu have been living with wildlife for centuries, sometimes contentiously, and Reteti is our final hope that people and elephants can share a landscape together. Reteti demonstrates what is possible in that people can live the lives that they want and also have a healthy environment; it doesn’t need to be one or the other.

Q: What do you hope for?

A:  I think Reteti will help protect this wilderness for generations to come by providing jobs and educating communities on the importance of their grasslands, forests and watersheds. We all do better when the landscape is healthy, and CI is so important in bringing the message that people thrive when nature thrives. CI has also helped us broaden our community connections and build our capacity to be more effective, which is a huge value to Reteti.

Leah Duran is a staff writer for Conservation International.