Update: What we’re learning about the world’s largest fish

Editor’s note: Indonesia’s Bird’s Head Seascape is home to a large population of whale sharks, the world’s largest fish and, until recently, largely a mystery to science. In 2015, Conservation International (CI) scientists made headlines by launching the world’s first successful fin-mounted satellite tagging program for whale sharks. By directly attaching a satellite tag to the creatures’ dorsal fins, researchers have been able to receive near-real-time updates on the position of the sharks.

Here, CI’s vice president for Asia-Pacific marine programs, Mark Erdmann, reflects on the most interesting satellite tracks the team has recorded in the past two years.

Perhaps the most surprising finding has been just how differently each of these sharks behaves. While we expected to see some “generalized tracks” of migrations of the sharks out of the Bird’s Head region, in reality every shark has largely acted independently. Some have remained close to home, while one traveled more than 5,100 kilometers (3,169 miles) from West Papua — and each satellite track has revealed unique behaviors. 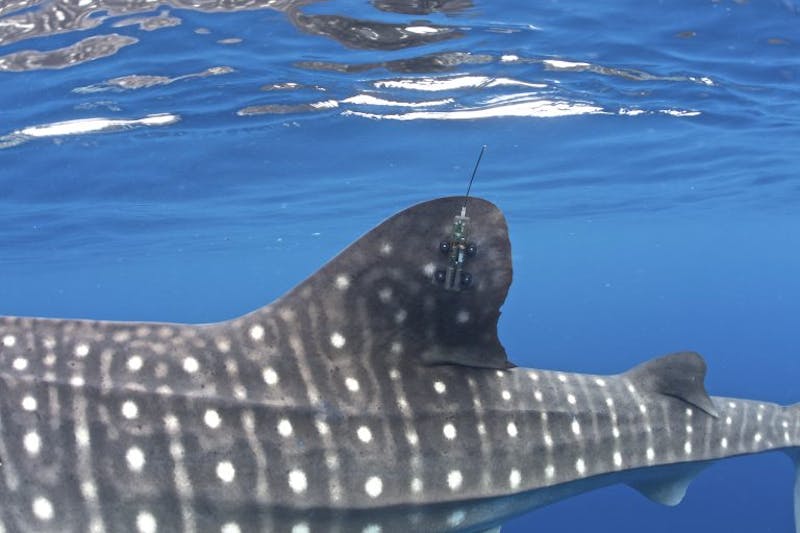 One of the custom fin-mounted satellite tags designed by Wildlife Computers to track Bird’s Head whale sharks for up to two years. Each time the shark’s fin breaks the surface of the water, the tag’s antenna is able to communicate with the ARGOS satellite network and send data on the shark’s position and its recent diving behavior. (© Conservation International/photo by Mark Erdmann)

The 4.5-meter-long (about 15 feet) whale shark “Sharky McSharkface” (who incidentally was named in a CI online naming contest) is now a world-record-holder for the longest satellite tag data series from a whale shark. His tag has been transmitting now for 25 months continuously, all the more impressive given that the satellite tags’ battery packs are designed to provide up to a maximum of two years of transmissions. During this period, Sharky has been largely a homebody in Cendrawasih Bay, venturing out of the bay only for a short time in late December 2016. He has recorded some impressive dives of up to 1,288 meters (4,226 feet) deep during this time, however. To put that into perspective: Scuba-diving humans generally go to a maximum 30-40-meter (98-131 feet) depth; a human that dove to 1,288 meters without the aid of a submersible would be crushed to death. 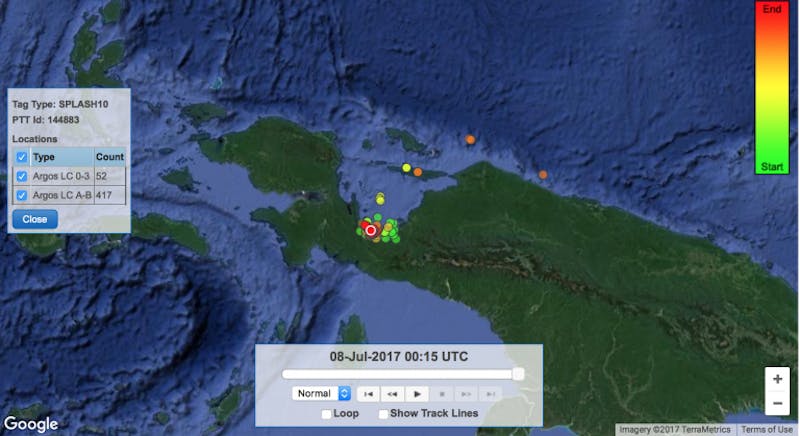 Map showing the satellite track of Sharky McSharkface, with dots clustered around Cendrawasih Bay, West Papua. Green dots indicate position data from the beginning of the deployment (from June 2015), while the increasingly darker dots show position fixes from later. The red dot with the white outline indicates the shark’s most recent position in July 2017. (© Conservation International)

Speaking of deep diving, 6-meter-long (20-foot) “Moby” recorded one of the deepest known dives for whale sharks (1,856 meters, or 6,089 feet!) during his impressive travels north from Cendrawasih Bay to the southern Mariana Trench. Interestingly, he made this northerly loop between March and June 2016, then did a short jaunt westward to Raja Ampat, Indonesia, before returning to Cendrawasih Bay for about eight months. That’s a huge distance to cover — and in only three months! In March 2017, he looked to be repeating his northern migration, but has unfortunately not sent any further position data since then. 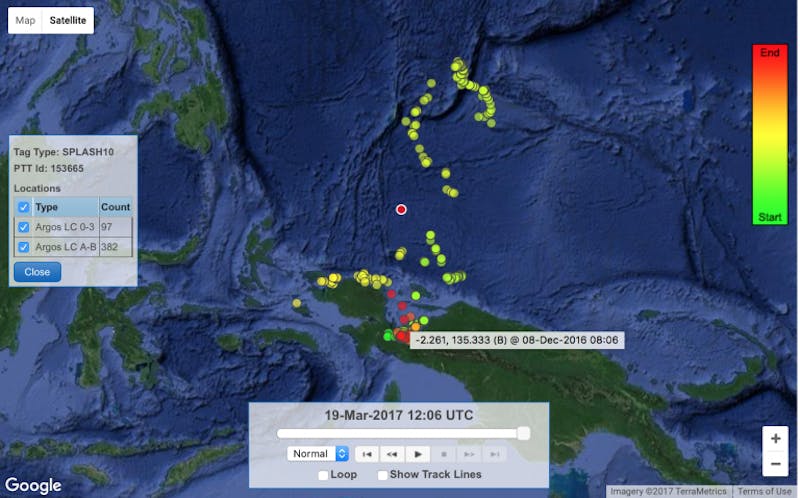 Moby made numerous dives below 1,500 meters during his travels up to Palau and Yap at the southern end of the Mariana Trench. His total track length reached 6,270 km before he stopped transmitting position data in March 2017. (© Conservation International)

“Wally,” a 6-meter (about 20-foot) male, laid down a very unusual track during the 15 months his tag was active. During this time, he left Cendrawasih Bay and closely hugged the coastline of New Guinea, stopping for weeks at a time at the large river outlets he encountered along the way. From what we can surmise, he was likely targeting the baitfish schools that tend to be abundant in the coastal waters off these big estuaries. He made it nearly as far as Wewak and the Sepik River outlet in Papua New Guinea, but then moved back and forth along the coastline repeatedly. He returned to Cendrawasih Bay for a short time and then back down the coast — clocking 3,800 kilometers (2,361 miles) during his 15 months of travel. 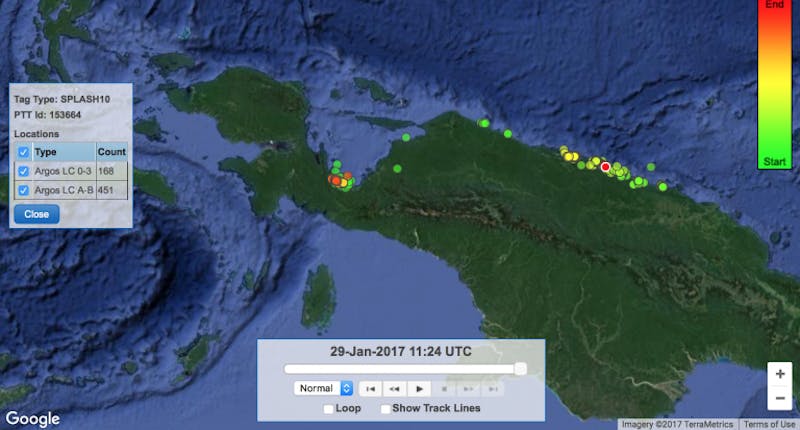 Wally showed a unique behavior of hugging the New Guinea coastline for his entire track, stopping only at the mouths of large river outlets (apparently to feed). He covered 3,800 km during his travels. (© Conservation International)

“Kaimana,” a 4.5-meter (about 15-foot) male, was the first whale shark we tagged in the Triton Bay area in the southern portion of Bird’s Head Seascape in December 2016. In the eight short months since he was tagged, Kaimana has traveled an impressive 4,000 kilometers (2,485 miles) while making first a southwesterly loop (tracing the outer Banda Sea island arc down to southern Timor-Leste, then back to Triton Bay), and then a northern arc along the FakFak coast up to southern Raja Ampat. Along the way he’s dived to 1,250 meters (just over 4,100 feet) in depth. 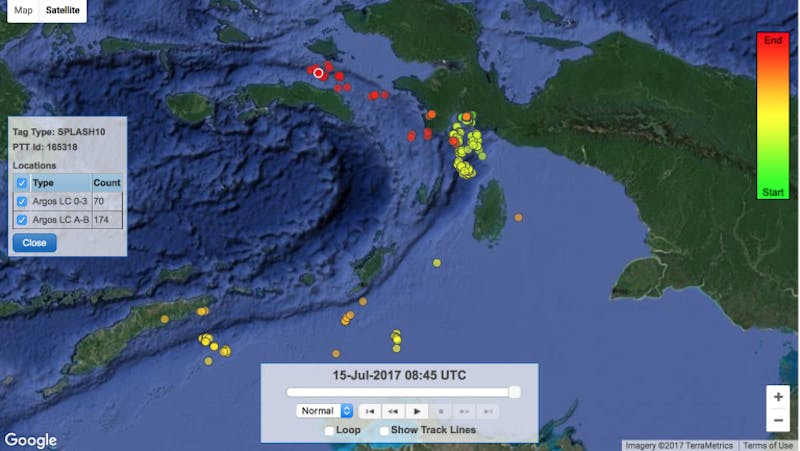 Kaimana was initially tagged in December 2016 in Triton Bay in the southern part of the Bird’s Head Seascape, and since that time he has made a large crescent-shaped track along the outer Banda Sea volcanic island arc. (© Conservation International)

The international man of mystery

“Kodo” has won the contest for West Papuan whale shark with the most stamps in his passport: The 4-meter-long (14 feet) male swam northwest from Cendrawasih Bay into the waters of Palau, then visited Mindanao in the Philippines, then back down to Indonesia, into Australia’s Gulf of Carpentaria, then back to southern Papua, Indonesia. He has covered more than 8,400 kilometers (about 5,220 miles) since being tagged in March 2016, and has spent the majority of the past 9 months in the vicinity of Merauke in southern Papua. This is particularly “mysterious” given that this is a mangrove swamp and mud-flat region — not the type of habitat we usually think of for whale sharks. We’re not exactly sure why he has spent so much time in these shallow muddy waters, but presumably he has found a food source that keeps him happy. 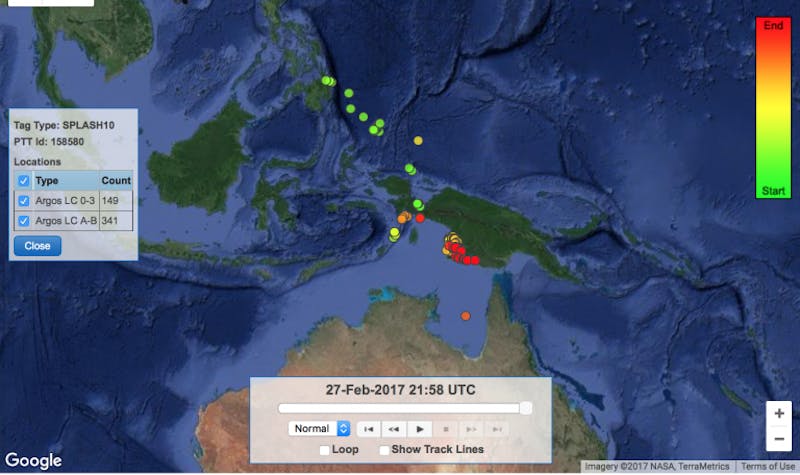 Kodo has hit four countries in his 16-month deployment (Indonesia, Palau, Philippines and Australia) and has spent an unusually long amount of time in the mud-flat and mangrove swamp region of Merauke in southern Papua (red dots). (© Conservation International)

“Cheggers” was tagged in November 2016, and after spending a few months in Cendrawasih Bay, decided to take a long trek to the northeast. What makes him interesting to whale shark researchers? The 5.6-meter-long (more than 18 feet) male has stayed mostly on the surface of the water during his 2,915 kilometer (1,811 miles) swim over to Yap and Chuuk in the Federated States of Micronesia (though he did occasionally dive as deep as 1,375 meters [4,511 feet]). 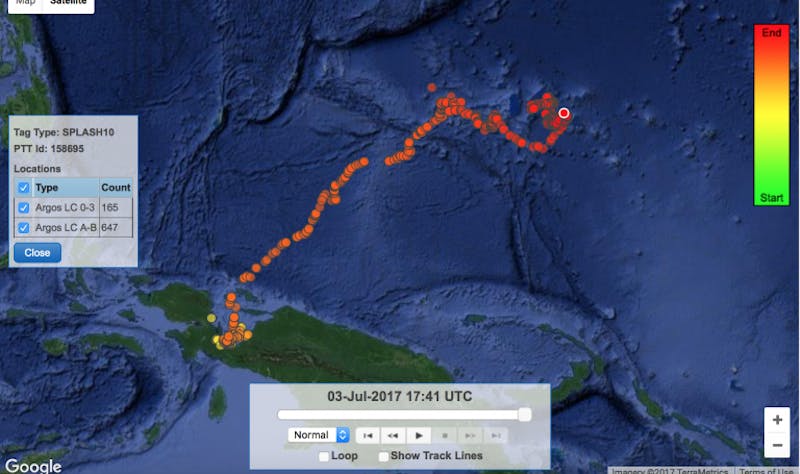 Cheggers has spent an unusual amount of time swimming predominantly along the surface while crossing very deep water up to Yap and Chuuk island groups in Micronesia. (© Conservation International)

Interestingly, the whale shark with the longest track length is also one of the smallest sharks we tagged. “Fijubeca” was only 3 meters (about 10 feet) in length when we tagged him in October 2015, but since that time he has traveled more than 9,000 kilometers (5,592 miles) on a track which led him north into Palauan waters, then east into Papua New Guinea, then over to the Indonesian island of Sulawesi, and then back to southern Raja Ampat and the FakFak coastline in West Papua, where he has spent most of the past year. The little shark has dived as deep as 880 meters during his 21-month tag deployment, impressive given his size! Equally as remarkable, Fijubeca has visited eight of the marine protected areas (MPAs) in the Bird’s Head Seascape during his travels. This makes us particularly happy as it indicates we’ve done a good job of designating these MPAs in areas that are important to marine megafauna migratory routes. 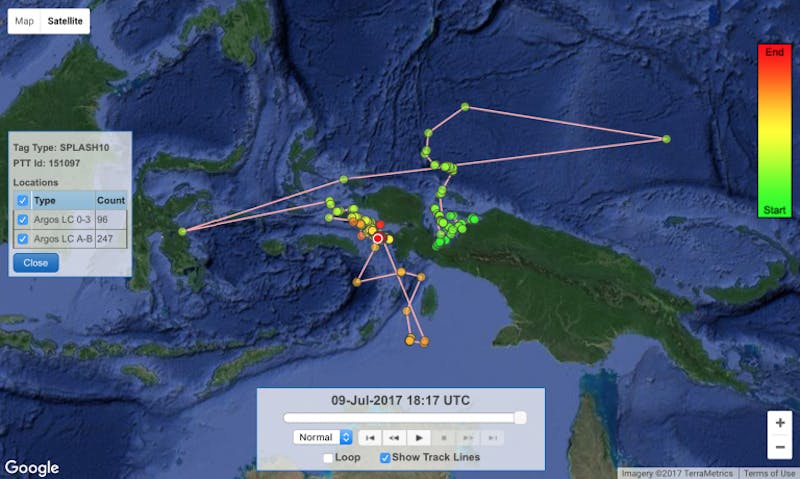 Fijubeca has travelled over 9000 km during his 21-month deployment, diving as deep as 880 meters while visiting eight of the MPAs in the Bird’s Head Seascape network. (© Conservation International)

The chairman of the board

Peter is a a 5-meter-long (16 feet) male named in honor of CI’s founder and chairman of the board, Peter Seligmann. We tagged Peter in April 2017 to commemorate Peter’s retirement after 30 years as our CEO — but Peter’s shark avatar has shown no signs of slowing down. To the contrary, after spending a month relaxing in Cendrawasih Bay, he shot north into Palauan waters, covering more than1,400 kilometers (about 870 miles) in the past two months. 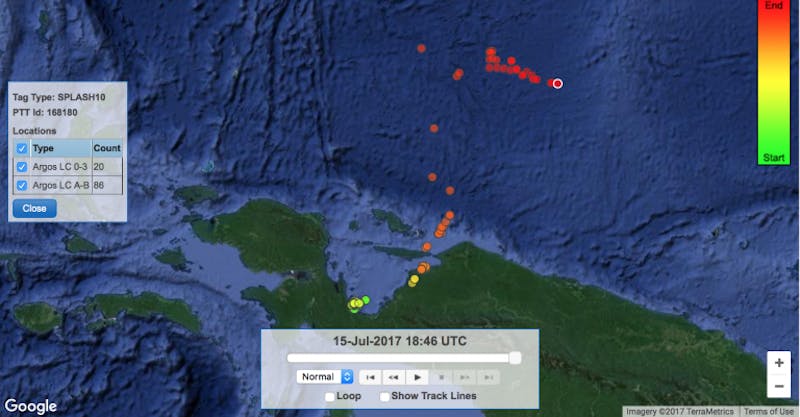 Peter has clocked an impressive 1400-km journey since leaving Cendrawasih Bay in mid-May 2017, only a month after he was tagged. (© Conservation International).

A look to the future

CI’s whale shark satellite tagging program has provided a wealth of insights into the secret lives of the world’s largest fish, and we are now using this information to improve the management of whale shark tourism in the Bird’s Head region. Importantly, the satellite tracks we’ve recorded have also highlighted several regions of West Papua that are frequented by migrating whale sharks that are now being considered for development of additional marine parks. In the near future, we are planning a major expedition in collaboration with the Georgia Aquarium and the Indonesian government to assess the health of Cendrawasih Bay’s whale shark population and specifically investigate whether current tourism practices are sufficiently “whale shark friendly,” or if they are causing undue stress to the sharks and requiring of additional management interventions.

This work was made possible in part by guests of the True North expedition vessel; CI donors including Matt Brooks, Pam Rorke Levy, the Wong family, Daniel Roozen, Marie-Elizabeth Mali, Enki Tan and the Sunbridge Foundation; Nexus International School; Oceanmax/Propspeed; and the University of Adelaide’s Centre for Applied Conservation Science.