The doctor is in: Indonesia’s whale sharks get annual check-up

Imagine swimming with a shark as big as a bus. Now imagine trying to measure, tag and take blood samples from this shark — giving it a physical, as in a typical doctor’s visit — but underwater and in less than 30 minutes.

For nine days, I helped complete the world’s first health assessment of wild whale sharks, the biggest fish on Earth, in Cendrawasih Bay in West Papua, Indonesia. By studying whale shark health, I and other scientists hoped to gain insight not only into Indonesia’s largest whale shark population, but also the health of the marine environment that these giant fish and coastal communities rely on for survival.

This opportunity meant that we could build in-country expertise and knowledge for whale shark conservation, and as a result, wider ocean conservation — by local Indonesians who love and care for the waters that nourish and bring joy to our lives. After all, millions of Indonesians depend directly on the oceans for their food and livelihoods, while thousands travel domestically to experience the wildlife and beauty of these waters.

As the sun peeked over the horizon, I hopped on a speedboat to visit the nearby “bagans,” or traditional fishing platforms that fishermen use to catch baitfish. Hungry whale sharks looking for fish sometimes swim into the large floating nets that hang from the platforms, giving researchers a chance to study them up close.

I’d been here several times before, attaching satellite tags to whale sharks in order to better understand their movements and behaviors. Together with our partners from the Georgia Aquarium (GAI), our work this time included deploying a number of new satellite tags and studying whale shark stress levels before and after the tagging operation.

Luck was on our side. My Indonesian colleague and Cendrawasih Bay National Park ranger, Pak Mesak Andarek, and I spotted a whale shark as we pulled along the bagan’s starboard (right-hand) side. Shortly after, we were joined by Conservation International’s (CI) Dr. Mark Erdmann, as well as the GAI team, led by Dr. Alistair Dove.

Strapped into scuba-diving gear and armed with syringes and satellite tags, we had no time to waste. One by one, we back-rolled into the water and quickly made our way towards the bagan net, where a whale shark lay still.

A flurry of activity began underwater. Following my training as a shark and ray scientist, I began to gather measurements of the shark so we could properly document its life history, growth, and most important, its identity.

Researchers from Georgia Aquarium then took blood samples by inserting a large needle — the same kind used to draw spinal fluid from humans — into the shark’s pectoral fin. We conducted this blood draw twice on each shark, before and after our tagging operations, to compare the levels of stress-related chemicals in their blood.

In total, we took blood samples from 20 individual whale sharks and deployed seven new satellite tags. Preliminary results have shown that, just as we had observed, whale sharks are not stressed by the tagging activities. GAI researchers are conducting more tests on these blood samples, including investigating if whale sharks are affected by plastic pollution, as these creatures are surface filter feeders in one of the world’s most polluted seas. 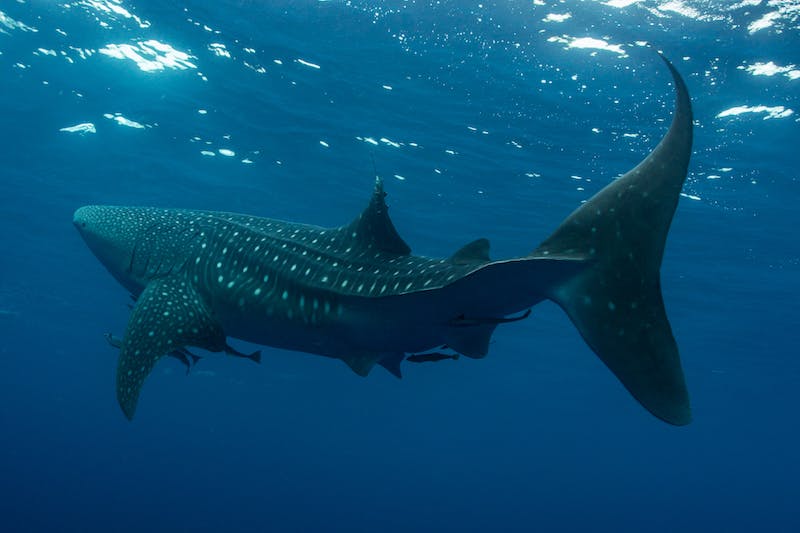 While taking samples, we also noted that many of the sharks had injured nostrils caused by fish hooks; as a result, we recommended to the Cendrawasih Bay National Park Authority that fishing lines be prohibited when whale sharks are present. Several whale sharks had scrapes on their dorsal fins due to rubbing against bagans, an issue that can be quickly fixed by covering the platform’s wooden stilts with a smoother material such as plastic pipes.

My greatest sense of achievement and fulfillment from this successful expedition came from exchanging knowledge: Mark and I received training from GAI’s scientists on how to draw blood, while we trained them to tag whale sharks. Snorkeling right above us during one such whale shark training exercise, our partners from the Cendrawasih Bay National Park Authority, Ministry of Marine Affairs, and State University of Papua also observed these procedures. They were keen to learn and integrate our resulting research findings into management and conservation plans for the bay, ensuring that ecotourism can continue to benefit local communities.

The people who live in the village of Kwatisore, who call the whale shark “Gurano Bintang” (the “starry shark”, based on its unique color pattern that looks a lot like the Milky Way!) used to fear these creatures. It is not hard to understand why — these sharks are at least three times the size of a traditional canoe and are known to swim right beneath the water’s surface.

Now, equipped with traditional and modern knowledge of whale sharks, they no longer fear Gurano Bintang, and have come to believe that these animals embody the spirit of their ancestors. The income they receive from ecotourism has also reinforced their belief that whale sharks are a sign of good fortune.

Together with our partners, we will forge ahead with whale shark conservation, protecting this mysterious species and the vast oceans they live in for the benefit of people around the world.