Editor’s note: This post was updated on June 25, 2018. “Dulce” won the award for Best Documentary Short at the Palm Springs International ShortFest 2018.

On Colombia’s Pacific coast, women, many of them single mothers, collect clams called “piangua” by hand in the mangroves.

In order to join their mothers on harvests, children must learn how to swim — a rite of passage captured in “ Dulce,” a film produced by Jungles in Paris in partnership with Conservation International that premieres today at the 2018 Palm Springs International Shortfest.

In this piece, Cassandra Kane of Conservation International’s Conservation Finance Division writes about an initiative that has helped Dulce’s community ensure their mangroves and pianguas are around well into the future. 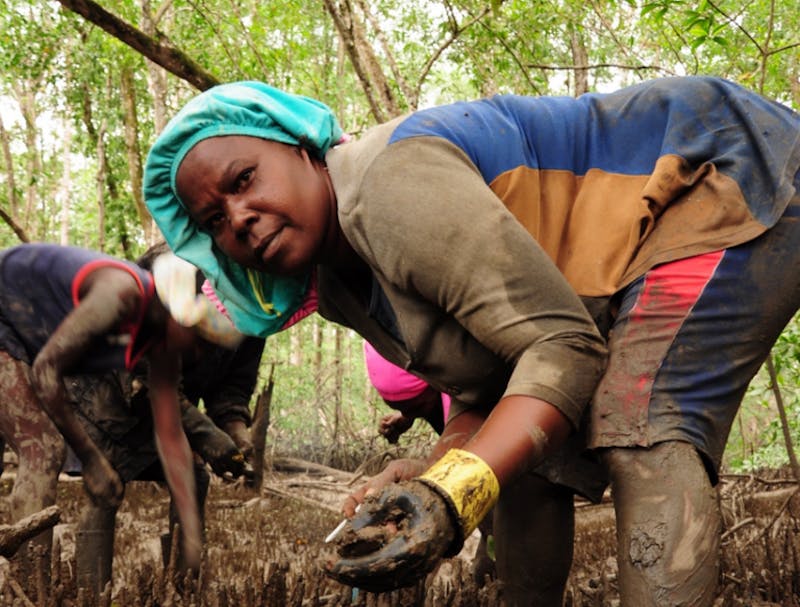 Women from Santa Bárbara de Iscuandé, pictured above, dig for clams in the mangroves. (© Asociación Calidris)

Nearby, the dense tangle of stilt-like mangrove roots rises out of the thick mudflats, sheltering many of the families’ way of life: an unassuming but vital shellfish called the “piangua.”

In the southwest corner of the Nariño Department on Colombia’s Pacific coast, women clam collectors, called “piangueras,” forage in groups, often accompanied by their children as they harvest the clams at low tide.

These women are members of the 10 Afro-Colombian communities in the municipality of Santa Bárbara de Iscuandé that together form the Community Council Esfuerzo Pescador.

Few people in the communities actually eat the flavorful clams, which are rich in nutrients; instead, the piangueras sell their harvests to middlemen. Most of the black clams from Iscuandé end up in stews, ceviche or rice dishes in restaurants in Ecuador. There, in a country that has seen most of its coastal mangrove areas converted to shrimp farms, the black clam is considered a delicacy.

National guidelines were established to protect the piangua’s long-term sustainability. Clams must measure more than 5 centimeters (about 2 inches) in length to be harvested. Despite this, the pressure grew as more people, including from other communities, turned to the resource in hard times. When fish catch is low, fishers often turn to piangua as a last resort to supplement their income, collecting immature clams before they can reproduce. Outsiders also clear the mangroves to sell to an illegal market, activities that cannot be easily stopped by local authorities.

In 2014, the future did not look promising for the piangua population: 60 percent of extracted pianguas were less than 4 centimeters, which means that the clams were not mature enough to reproduce and sustain the population.

By 2017, though, 90 percent of extracted pianguas complied with the size rule.

To help the Iscuandé communities conserve mangroves and recover the piangua population, Conservation International teamed up with local partners Asociacion Calidris and Fondo Acción and the regional environmental authority Corponariño in 2015.

The partners reached a deal with the 10 communities’ 2,200 residents, who agreed to not capture, sell or consume piangua smaller than the permissible size; identify and establish areas where people won’t catch piangua; help monitor piangua populations; and provide zoning input to protect 14,000 hectares (35,000 acres) of mangroves.

A poster on the wall of one of the community’s meeting halls summarizes their commitment to nature: ” ‘WE AGREE’ the Iscuandé river mouth is a place to preserve.”

In return, the clam collectors receive boots, gloves, T-shirts and balaclavas to make their work safer. Nearly 150 people have received leadership and administrative training. Also, 27 community members taught students traditional knowledge about piangua extraction and sustainable use of the mangrove ecosystem. The communities have also received funding to improve infrastructure, including the construction of wooden walkways between their houses.

“We have seen more piangua, and people who were not previously in the conservation agreement now want to join because they are seeing that it works,” said Ninfa, a pianguera from the community.

“The conservation agreement is another reason for us to adequately manage our territory,” said José Kennedy Castillo, president of the Community Council Esfuerzo Pescador.

A boon for biodiversity

The mangroves near Iscuandé are so tall that they dwarfed a local fisherman in his boat.

Beyond serving as the breeding grounds for piangua, mangroves play other critical roles in the ecosystem here: They’re incredibly efficient at sequestering carbon, and their tangles of roots help stabilize the coastline, reducing erosion from storm surges, currents, waves and tides.

“If we preserve the mangrove, we will have piangua. If we do not take care of it, in five years there will be no more,” said Fanny Micolta, another pianguera from the community.

“Mangroves are our life, our livelihood,” said Maria Bety Arboleda, one of the local monitors. “They are priceless.”

This conservation agreement project is supported by the Global Environment Facility Earth Fund, in collaboration with the United Nations Environment Programme as implementing agency, as part of the Conservation Agreements Private Partnership Platform.