Murders of environmental activists reflect chronic clashes over resource use 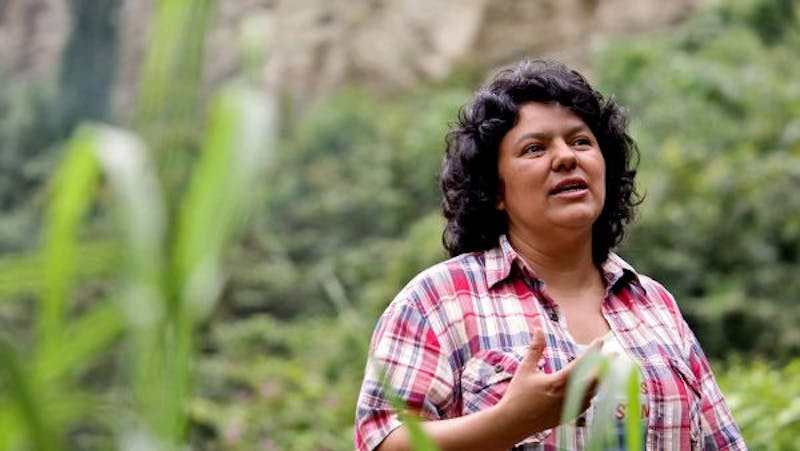 Berta Caceres at the banks of the Gualcarque River in western Honduras, where she led a prolonged protest against construction on the Agua Zarca hydroelectric project, which poses grave threats to the local environment, river and indigenous Lenca people. She was murdered in her home in March 2016. (© Goldman Environmental Prize)

When I heard of the horrific murder of Berta Cáceres, a Honduran environmental activist who had spent years fighting to protect her community’s traditional lands, I was shocked — though perhaps I shouldn’t have been.

A recent study conducted by international watchdog group Global Witness found that Honduras is currently the most dangerous country to be an environmental activist, with 109 activists murdered between 2010 and 2014. Two weeks after Berta’s death, another member of her organization, Nelson García, was also killed for his involvement in the movement. Their murderers are still at large.

This distressing news isn’t just a terrible loss for the family and loved ones of Berta, Nelson and the other victims. It’s also a chronic symptom of clashes between resource users taking place around the globe — and a frightening omen for the future of the land these activists fought to protect.

I first met Berta in Guatemala City in 2002 during an important meeting between Central America’s ministers of environment and civil society groups. As Costa Rica’s minister of environment and energy, I had spent six months organizing this gathering to discuss infrastructure development, deforestation, protected areas, community and indigenous rights and environmental conflicts.

To guarantee the meeting’s success, I needed to find a few strong civil leaders to lead most of the discussions and help generate confidence and consensus. A colleague recommended that I ask Berta, a soft-spoken indigenous representative from the Lenca community in Honduras. In order to reach her by phone, I had to leave a message on a public phone — one of only two phones in her town at the time — saying that I would call the next day at a particular time. It took me a week to connect with her. Once I was able to convince her that I actually was Costa Rica’s environmental minister, she remained dubious of my intentions, but in the end she agreed to my proposal.

During the three-day meeting, Berta did a fantastic job; thanks to input from her and others, we ministers learned a lot about the most pressing issues that communities are facing in light of major development investments in the region.

I remember talking with her about her concerns regarding government-sponsored plans to dam the Gualcarque River, which the Lenca people depend on for survival. I closely identified with her cause; in the late 1980s I co-founded an organization called Pro-Rios to fight against government plans to build two big dams in Costa Rica’s pristine Pacuare River. It took us 10 years to revert the government plans, but in the end we successfully halted this process when the river was declared a national protected area, indefinitely protecting this tropical jewel.

Berta’s heroic efforts to prevent the construction of the Agua Zarca Dam — which was planned without consulting the Lenca people — have so far been successful, thanks in part to the yearlong road blockade she organized which prevented worker access to the dam site. (Last year, Berta was awarded the prestigious Goldman Environmental Prize in recognition of her achievements.)

However, this success has come at a high price. While protesting the dam, members of the National Council of Popular and Indigenous Organizations of Honduras (COPINH), an indigenous organization co-founded by Berta, were regularly removed from the dam site by security officers; on a couple of occasions, the military opened fire on the protesters. In 2013, COPINH leader Tomás García was killed by a Honduran soldier during a peaceful protest; to date, seven COPINH members have been murdered.

According to the Mexican organization Desinformemonos.org, since 2005, 40 people have been killed in Mexico, Central America and Colombia for opposing dam construction. Dams in the region have become a huge source of environmental conflict, compounded by a lack of social and institutional means to resolve such conflicts.

The recent level of violence against environmental leaders in the region seems to correlate with an increase in organized crime. Corruption and the lack of impartial courts, transparent procedures and independent checks and balances has ramped up violence against social movements, threatening large infrastructure investments that have proven to be very weak on balancing economic investments with human rights.

In a world defined by growing populations and consumption patterns, dams and other large-scale infrastructure projects aren’t going away. But if there’s one lesson from Berta’s tragic death, it’s that how these projects are developed needs to change.

To create a future where essential ecosystems provide water, food and countless other benefits for billions of people, the development of large-scale infrastructure projects must respect human rights. We still have a long way to go to ensure this. Standards and safeguards can help minimize the impacts that dams have on the people and nature around them. These exist, but they’re often voluntary — and not necessarily followed.

In Costa Rica, construction of the Reventazón Dam marks a step in the right direction. This project, which is expected to begin providing power this year, was designed with social and environmental safeguards, including establishing the region’s first river offset. The offset agreement guarantees that artificial modifications, including dams, will be prohibited in the ecologically similar Parismina River (which connects to the Reventazón), preserving the river’s natural flow and migratory patterns for key fish species. Costa Rica’s national power company has committed to working with many regional actors in watershed management, including local municipalities, farmers, conservation organizations and national agencies, to ensure everyone’s voices are heard.

In many places, Conservation International (CI) has relationships with both the entities developing large infrastructure projects and the people affected by them. By convening government representatives, international and regional development banks, local NGOs and the men and women from affected communities, we can use constructive dialogue and give voice to communities to avoid conflicts over development and natural resources.

Organizations like CI work with strong, committed partners like Berta every day around the world. It is these individuals who make the conservation of important natural resources for the benefit of people a reality.

Berta’s loss is devastating, but those who knew her will continue her important work. I count myself lucky to have met such a woman, and I remain ever committed to protection of rivers in Costa Rica and beyond.

Carlos Manuel Rodriguez is vice president and senior advisor of global policy at Conservation International. Before joining CI, he held various political posts in Costa Rica, including director of the National Parks Service and the minister of environment and energy.

Cover image: Hundreds rally in New York City to demand justice for Honduran environmental activist Berta Cáceres’ murder, protection for her family and fellow activists and the immediate halt to plans for the dam she had been protesting. (© Natalie Jeffers, Matters of the Earth/UMWomen/Flickr Creative Commons)