Meet a scientist: a species-discovering savant

Editor’s note: A 2017 survey found that 81 percent of Americans could not name a living scientist. No, not a single one. At Conservation International, we have lots of scientists you should know. Here’s one.

Mark Erdmann is the vice president of Asia-Pacific marine programs at Conservation International, where he spends almost as much time underwater discovering new species as he does helping communities above ground conserve them.

Conservation News spoke to Erdmann about his run-ins with reef fish and manta rays — and how his love for the ocean was inspired by a television show.

Question: When did your fascination with the deep sea start?

Answer: I grew up watching “The Undersea World of Jacques Cousteau” — a documentary television series that followed the famous explorer as he traversed the ocean. For a boy living in the rural foothills of South Carolina, in the American South, the incredible scenes of coral reefs bursting with color and life were an absolute siren call to me. Of course, Cousteau himself was an inspiring and adventurous explorer figure — I was hooked! 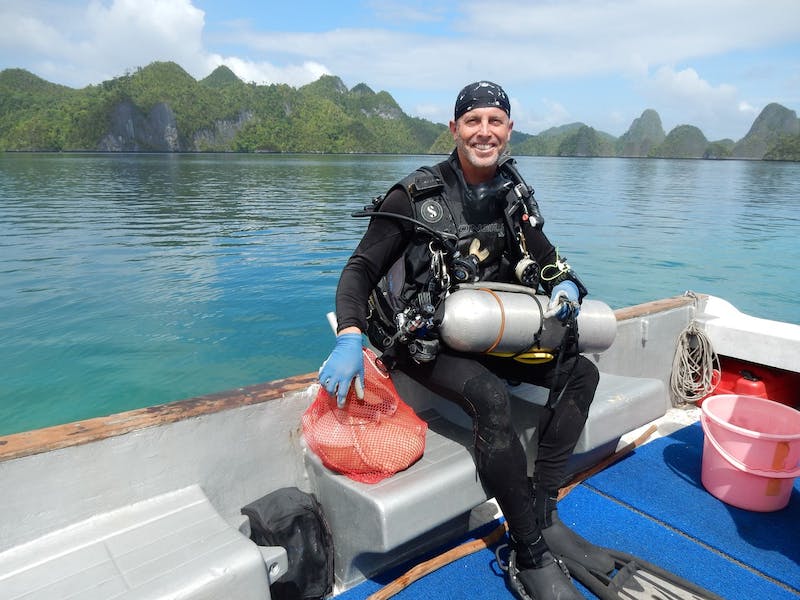 Erdmann about to go on a dive in Palawan, Phiippines (© Conservation International/photo by Mark Erdmann)

Q: So you’re a world-renowned marine biologist because of a TV show?

A: It sounds a little crazy, but after spending so much time watching Jacques Cousteau’s aquatic adventures, I decided to study marine biology at school. While pursuing my doctorate on the subject, I lived in a small fishing island in eastern Indonesia called Barang Lompo and studied the surrounding coral reefs. Unfortunately, as I was studying these coral reefs, many of my neighbors were destroying them through unsustainable fishing practices, such as blast fishing — when fishers use dynamite to increase their yield of fish. To prevent further destruction of these reefs, I engaged with these fishers to help transition to more sustainable techniques, such as fishing by a handline. The fishers were open to using these techniques because they knew that it would help to ensure their children and grandchildren still had healthy reefs to fish in the future.

This was my first foray into ocean conservation, and the moment that I decided to dedicate the rest of my career to protecting ocean critters.

Today, as the vice president of Asia-Pacific marine programs at Conservation International, I am largely focused on overseeing our ocean conservation projects in this region, as well as training our staff and partners to conduct ecological monitoring and conservation assessments of reef fish and larger fish species, such as sharks and manta rays.

Q: How much time do you spend underwater?

A: If I had unlimited air in my scuba tank while diving, I would spend 100 percent of my time underwater, but the reality is probably more like 30 percent of daylight hours whenever I am in the field.

I am a self-described “fish geek,” and I have been on more than 12,000 scuba dives over my lifetime so far – on all seven continents! One of my main jobs at Conservation International has been to lead “marine biodiversity assessments” — expeditions to count the number of species in a given area and share this data with government partners to help prioritize investments in new protected areas.

During my first survey to West Papua, Indonesia, in 2006, our team discovered more than 50 new species of fish and coral, including two new species of walking sharks. Since then, I have discovered more than 200 species of fish, coral and mantis shrimp across the Asia-Pacific region. Through these discoveries, we have worked to foster local pride and inspire conservation action to help communities protect the amazing reefs of this region — and the marine species they support.

Q: Can you tell immediately that you’re seeing a new species? 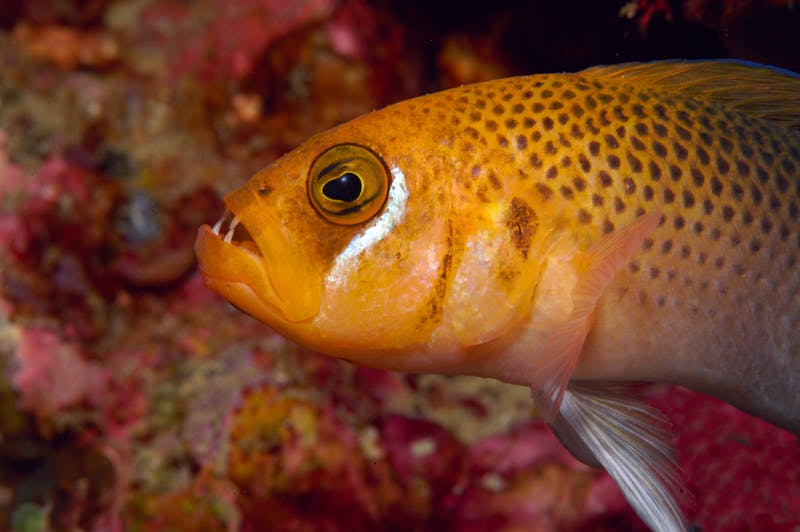 A: In the areas where I work in the Pacific and Indian Oceans, there are upwards of 3,500 different reef fish species, and many of them look incredibly similar. To know that one fish is a new species, you need to memorize the appearance of all of the fish species in the area, noting the minor differences in size, color and more. If we see a fish that we don’t recognize, we snap detailed pictures and carefully compare them to identification guides and the published descriptions of the species that it most closely resembles. If it doesn’t match anything in the guide, that is how we know it is new.

It’s typically easier with people that have a visual memory when it comes to colors and patterns — and luckily, I am one of those people. Along with this natural aptitude, it really just takes a lot of time underwater and a willingness to explore new places.

Another surefire way to find new species is by conducting surveys in areas that people have not explored before, from deep-water reefs to muddy mangroves — but you always have to keep an eye out for crocodiles in these swamps!

Q: Crocodiles — that sounds dangerous. What dangers threaten the marine species you study?

A: Overfishing is a big one: Three out of seven people worldwide rely on seafood as their primary source of protein — and overfishing and destructive fishing practices have skyrocketed in recent years to meet this demand. Additionally, a number of iconic marine species — such as whale sharks and manta rays — in the waters throughout Asia are targeted for their fins and dried gills, which are exported as delicacies and traditional medicines. And we can’t forget the warming seas and ocean acidification caused by climate change. All of these threats are decimating fish populations around the globe.

To combat this, Conservation International and partners have worked with governments in the Asia-Pacific region in recent years to illustrate that manta rays are actually worth more money alive than dead for their tourism potential — 2,000 times more to be exact. However, manta rays and whale sharks can be difficult to protect because they are highly migratory species, meaning that they travel long distances to feed or mate. Since 2014 and 2015, we have initiated manta ray and whale shark satellite tagging programs throughout the region to learn more about their migratory patterns and how best to conserve these highly mobile species. Informed by the data from these programs, governments such as Indonesia, Timor-Leste and several Pacific Island nations have recently granted full legal protection status to both of these iconic species, which means that it is an offense to catch or harm them.

Q: So now that these species are protected by law, they are no longer in danger?

A: Even though a species is protected by law, it doesn’t always mean their habitat is, which is why marine protected areas (MPAs) are so important. MPAs — areas of the ocean where human activity is restricted — are the cornerstone of ocean conservation, supporting both marine habitats and the species that depend on them. On average, fully protected marine areas can increase fish populations by more than 400 percent.

Unfortunately, establishing an MPA takes time and money. In a perfect world, we would have unlimited financing to establish MPAs across the entire ocean, but this is not the case, so we have to choose wisely. Our marine biodiversity assessments help us effectively decide where to establish MPAs through two major criteria: the overall biodiversity (the number of fish and coral species) in a given area, as well as the rarity or uniqueness of the species found there. For example, the Bird’s Head Seascape is one of the most biodiverse marine areas on Earth — which is why we have worked closely with the Indonesian government and more than 30 partners since 2004 to create a network of 21 MPAs covering more than 4.7 million hectares (11.61 million acres) of ocean in this area. Since the network’s inception, fish populations have rebounded; sharks, whales and rays have returned; poaching by outside fishers is down 90 percent; coral is recovering; and ecotourism has flourished.

At a time when marine species face an array of threats, networks of large MPAs such as the Bird’s Head Seascape are crucial to conserving the ocean’s biodiversity.

In Hawai‘i, there is not as wide of a variety of reef fish or coral species, but many of the species are rare and only found around these unique islands — which means that if we don’t protect these waters, these species are highly vulnerable to extinction. Even if an area is abundant with unique species, however, we must also consider the surrounding community’s willingness to support an MPA in their region to ensure its success.

Q: Other than digging into old Cousteau episodes, what advice would you give an aspiring marine biologist?

A: You have to follow your passion for the ocean and push through the roadblocks that will inevitably try to get in your way. People will tell you that you won’t get paid a lot or that there aren’t enough jobs, but if you are truly determined, you can always make a living out of something you love. As a mentor to several young Indonesian marine scientists, I have witnessed firsthand how their passion can evolve into thriving careers.

It is also crucial to explore new and underrepresented fields of marine biology — focus on a species or habitat about which there is nothing written, and you’re almost guaranteed to find amazing things. We know less about the ocean than we do about the surface of the moon, and humanity needs people to help us learn more.

Find something you love about the ocean and dive deeper into it. 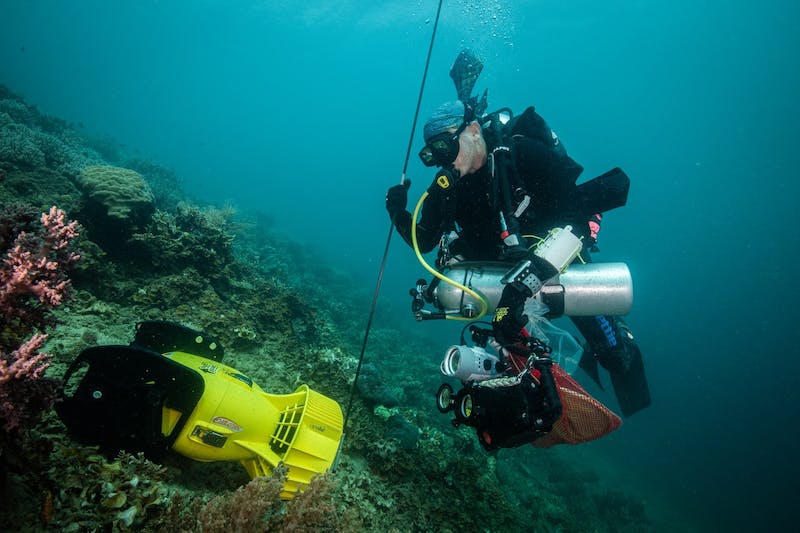 Erdmann on a dive in Papua New Guinea (© Nick Hawkins)