Editor’s note: If the tuna that Pacific Island communities have reliably fished for generations suddenly change their behavior — teeming in totally new areas of the ocean or in smaller numbers, for example — this behavioral shift doesn’t affect only the tuna. Caused by warming waters due to climate change, this shift affects everything and everyone, from other species in the marine food chain to the livelihoods of fishers all over the Pacific.

A groundbreaking conference in Australia last year raised awareness about the full picture of mass species migration in response to climate change — and what it means for human well-being. The conference’s key findings were recently published in a global review in Science. Human Nature sat down with Conservation International consultant and Pacific Islands fisheries and food security expert Johann Bell to learn more.

Question: Last year’s conference was fittingly titled “Species on the Move.” Can you explain what that means

Answer: When we say that species are “moving,” we’re talking about two things: changes in the overall distributions of species — that is, their occurrences in places where they haven’t been observed before; and changes in their relative abundances within their known distributions.

The first of these movements is easy to detect — people observe species they have never seen before in a given place. The second can be subtler: For example, there may be little change in the overall distribution of a Southern Hemisphere coral reef fish species (because it is blocked from spreading further south due to the absence of coral reef habitat), but it becomes more abundant in the south of its distribution than in the north.

Q: You were one of the keynote speakers at the conference, and one of the authors of the global review. What was one of the review’s most important findings?

A: One of the key patterns we’ve found when studying “species on the move” is that many animals and plants are moving towards the northern and southern poles as they seek their preferred temperatures.

Although the corals that build reefs are “sessile” — or immobile — species, and can only move when their larvae settle and establish in new places suitable for their growth, corals provide a dramatic example of the effects of ocean warming on the redistribution of marine species.

In the tropics, corals are living in waters that are very close in temperature to their maximum thermal tolerance — the temperature they can survive in. Ocean warming is causing sea surface temperatures to rise to the point where corals become stressed and expel their zooxanthellae (the microscopic algae that live in their tissues and provide them with much of their food and their color). This results in coral bleaching, which will kill corals if it persists for long periods (usually more than one to two months).

Q: What are the projections for the future, if climate change and its effects on the ocean continue at this rate?

A: Predictions that corals will bleach more frequently as the ocean warms are now beginning to be fulfilled. Over the past 20 years, major coral bleaching events have been separated by several years (the worst events being in 1998 and 2010). However, since 2014, back-to-back coral bleaching has occurred in Guam, parts of Hawaii and Florida. The widespread bleaching of corals on Australia’s Great Barrier Reef (GBR) in 2016 is also being repeated in 2017.

There is little scope for the GBR to extend into new areas because there are few suitable places for corals to settle and grow further to the south, and because the negative effects of ocean acidification on growth of coral become more intense in southern waters.

Increases in coral bleaching are expected to reduce the amount of fish that can be harvested from coral reefs. This will cause problems for many of the Pacific Islands where small-scale fishers are already struggling to harvest enough fish from coral reefs to provide much-needed protein for rapidly growing coastal communities. The movement of skipjack tuna described above will make it easier to catch tuna to help fill this gap in some Pacific Island countries, but harder in others. When it comes to using the rich tuna resources of the tropical Pacific for domestic food security, there will be winners and losers. 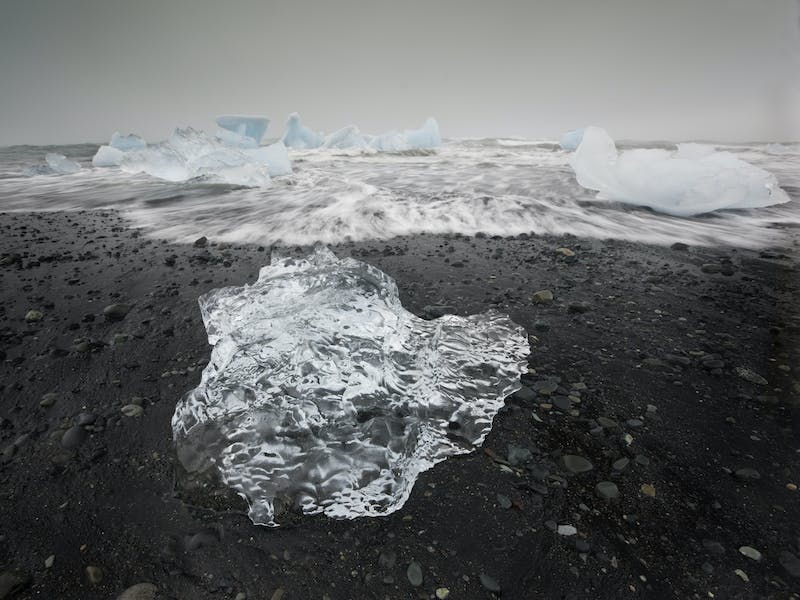 Even the Arctic will be affected by mass species migration. (© Art Wolfe/ www.artwolfe.com)

Q: What are some of the effects of climate change on species migration on land?

A: Certainly, the progressive poleward migration of species isn’t limited to the ocean — it is also happening on land. A potent example comes from the Arctic Circle, where shrubs are now growing in what was previously treeless tundra. These shrubs are shading the lichen and mosses that reindeer rely on for food in winter, with consequences for the size of reindeer herds and the livelihoods of the Indigenous people who depend on the animals for food and livelihoods.

As a general rule, species are moving more quickly in the ocean than they are on land. The average recorded distance that species have been moving towards the poles per decade in the oceans is 72 kilometers (about 45 miles), whereas on land it is 17 kilometers (about 11 miles). One reason for this is that migration on land is sometimes blocked by steep terrain — as species climb higher they encounter conditions below their preferred temperatures and go no further.

But species are also ascending to higher elevations on steep terrain as the atmosphere warms. Unfortunately, this has been happening with mosquitoes carrying malaria. Human populations who have never been exposed to this disease before are now becoming vulnerable — a situation that is made worse because these people have little or no immunity to malaria due to lack of previous exposure.

Q: How should humanity respond?

The redistribution of species is expected to affect the implementation of the U.N. Sustainable Development Goals (SDGs), something that has not really been considered until now. Take SDG No. 2, for example, which is all about ending hunger, achieving food security and promoting sustainable agriculture. There are many ways in which “species on the move” can disrupt those efforts. Policies to assist the agriculture and aquaculture sectors adapt to climate change should not be limited to selecting for plant and animal strains that are more tolerant of higher temperatures; they should also include plans for dealing with pests and pathogens that may be favored by climate change and move into new areas, or become more virulent in parts of their existing distributions.

There are also implications for the measures currently in place to conserve wildlife. Because many species are likely to move across the boundaries of areas established to protect them, policy makers will need to develop more flexible ways to continue to provide the protection needed by vulnerable species. Increasingly, neighboring countries will need to work together in new ways to conserve biodiversity.

Q: What can the average person do to respond in order to help both people and wildlife?

A: There is certainly a role for “citizen science.” By engaging in projects to document the occurrence of species in new places (for example a new bird species in your back yard), or changes in the relative abundance of species at a given place, we can all help alert government agencies about which species are “on the move.” Redmap, an Australian database which allows scuba divers, and recreational and commercial fishers, to report any uncommon marine species not usually seen in particular coastal areas, illustrates how this can be done.

Johann Bell is a consultant for Conservation International and a Pacific Islands fisheries and food security expert.