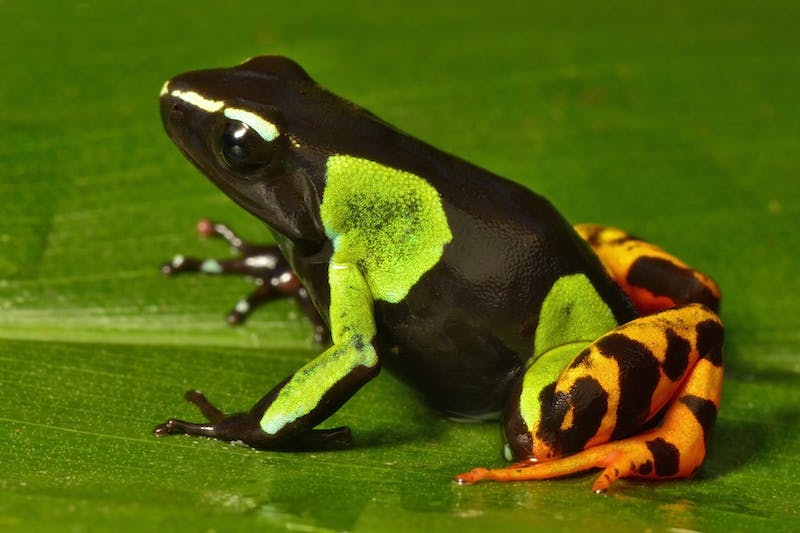 Everyone has a hobby. Trond Larsen’s is photography.

As the Rapid Assessment Program director at Conservation International, Larsen spends his days organizing international teams of scientists to find and document wildlife in far-flung locales. His camera goes with him to the wild, and his photos — predominantly of the animals he encounters in the field — have appeared everywhere from National Geographic to The New Yorker.

But Larsen can claim one photographic achievement that few on Earth can rival: One of his photos is on money. A shot that Larsen captured of a small, rarely seen frog was recently selected to grace a banknote in Madagascar.

This is the unlikely story of how a scientist’s zeal to find a frog “paid off.”

It started with a workshop — and a desire to sight-see.

“We were in Madagascar for meetings around a project we were doing,” said Rachel Neugarten, director of priority-setting at Conservation International. “So we had a workshop, and then a few of us organized a field trip for those who wanted to stay to try to see a little bit of Madagascar.”

The group, including Neugarten, Larsen and a few other staff, found a guide willing to take them through Ranomafana National Park, in the southeastern part of the island. Their mission for that day: to help Larsen find a tiny frog known of the genus Mantella.

Mantella frogs, of which there are more than a dozen species, are endemic to the island of Madagascar — meaning they live nowhere else on Earth. Small and brightly colored, they are reminiscent of their more famous South American cousins, the poison dart frogs.

“I was searching for this species because I really wanted to observe and photograph them,” Larsen said. “I told everyone in the group, ‘I’m not leaving until I find a mantella.’ ”

It’s an intensity that any breed of enthusiast, from birdwatchers to trainspotters, can understand.

“It’s been one of his ‘bucket list’ species that he’s been wanting to see his whole life,” Neugarten said.

The challenge: finding a tiny animal that does not want to be found.

“They tend to have very narrow distribution, with several species across Madagascar,” Larsen said. The species he was after, he said, was not endangered but it is hard to find, typically hiding under logs.

Fortunately, the team had an able guide.

“The guide knew exactly where this frog was,” Neugarten said.

Needless to say, it isn’t always so. Larsen’s work to find and document wildlife has taken him places few humans have ever seen. But this time? No bug-bitten treks through thick rainforest. No grueling canoe trips upriver. No hiking through miles of rugged, remote terrain. This time, the object of his search was just there, a short distance off the side of a road.

“We had to drive through one of the local communities to a little wetland area,” Neugarten said. “The guide hopped out of the car, walked a few yards in and came back with one of these frogs. He knew exactly where they were and how to find them.”

Moments later, a glimpse of the rare critter he came to see: Mantella baroni, not much larger than an adult’s thumb. Glistening and vibrant, its bright neon-green front legs and tiger-striped rear legs contrasted with the deep, dark black of its body.

Larsen, needless to say, was thrilled.

“At this moment, Trond is, like, beside himself, and he sets up this photo like a professional, and he’s taking pictures and having this out-of-body experience,” Neugarten said. “And the rest of us are just beside ourselves laughing because it’s a beautiful frog, but none of us has this connection to it that he does.”

Larsen managed to get within inches of the frog, who let him take several close-ups before hopping back into the undergrowth.

Given the importance of photography in nature conservation, it’s no surprise that a scientist would carry a camera around. But Larsen has taken his nature photography to a level few other researchers can match — and he is almost completely self-taught. 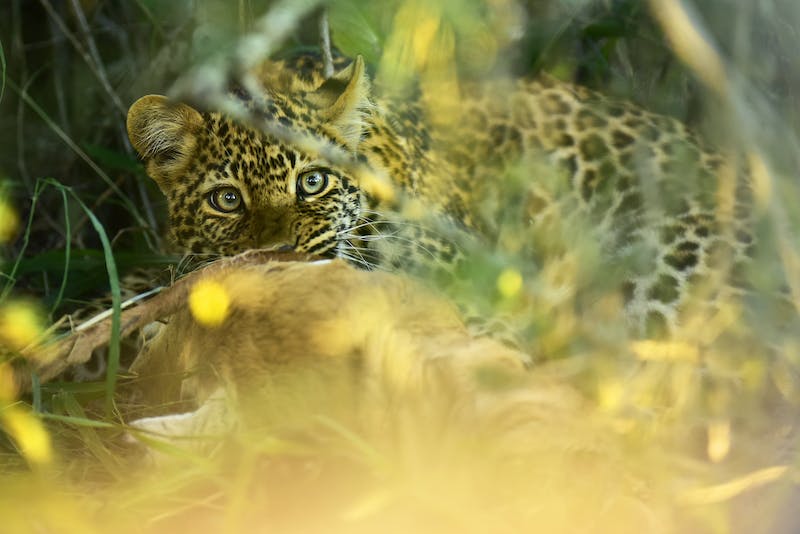 “The chance to artistically capture the beauty of [wildlife] is just really appealing,” he said. “I started to play around when I got my first SLR (camera), and I would bring a camera every time I was doing field work.”

“I took some pretty terrible shots at first, but you learn, and I started overlapping with professional photographers in the field and learned a lot of tricks from those guys.”

In 2017, Larsen was part of a small team of researchers selected to travel to a sensational archaeological find in Honduras. The site, known locally as “City of the Monkey God,” lay hidden for centuries within a concealed valley in the Mosquitia rainforest; its location remains a secret. The team’s perilous expedition to survey the area’s wildlife was chronicled in a story published earlier this year in The New Yorker — illustrated, naturally, by Larsen’s photos of the region’s rare amphibians and venomous snakes. 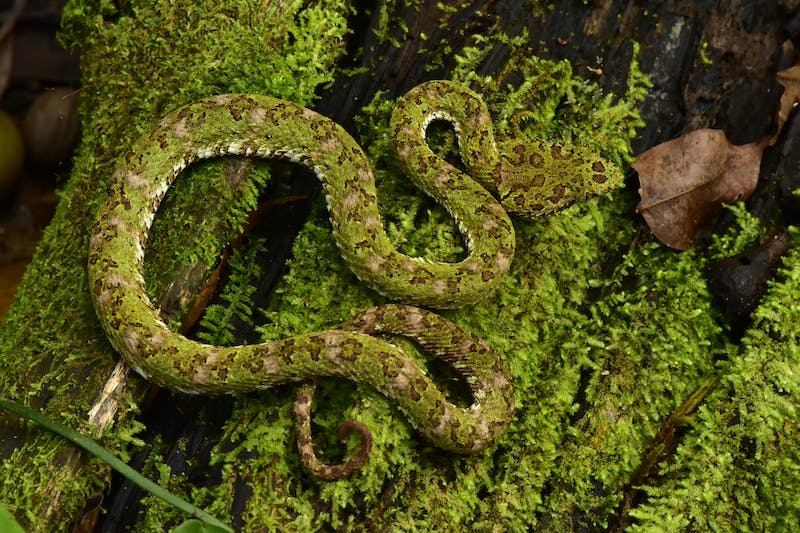 After his work trip to Madagascar, Larsen uploaded his frog shots to Conservation International’s in-house photo database and forgot about them.

“They wrote me and said, basically, ‘Hey, the government’s interested in using your photo for a new banknote, would you be willing to let them use it?’ ”

The country’s previous series of banknotes had been in circulation for about a decade, according to Secura Monde, a consulting company for the currency industry, when the government decided in 2016 to refresh them.

The theme for the new series: “the riches of Madagascar.” Whom better to ask than a conservation group?

Rajoelina’s team sent along a few options, including Larsen’s frog. A signed agreement granted the government the right to use the photo — Larsen said he was happy to give it freely for their use.

The diminutive amphibian suits the small-change 100-ariary bill, which is worth about 3 U.S. cents. But this means Larsen’s shot will be well-circulated in a country where nearly 80 percent of the population lives on less than US$ 2 a day. 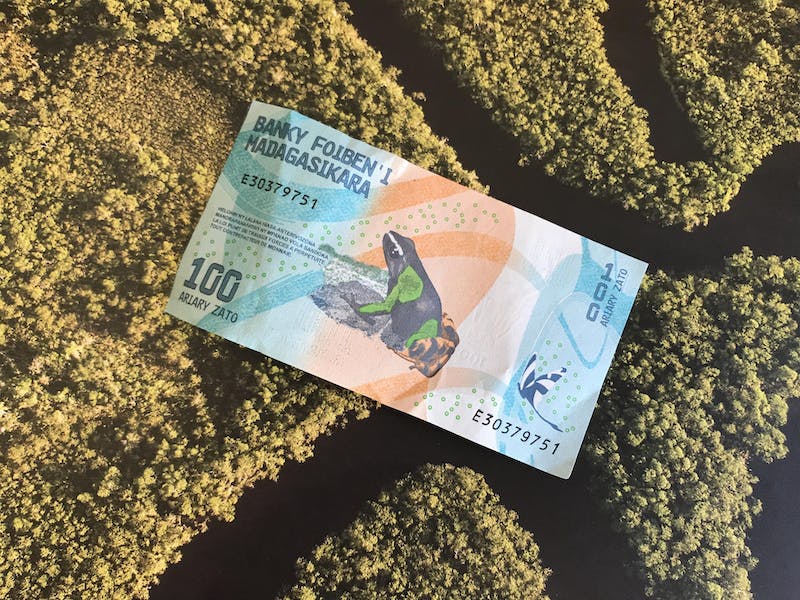 As for his photography, Larsen continues to bring his camera with him to the field — not for the recognition, but for science.

“My research is first, of course, but you can always make time for photos.”