Off the coast of Chile, the deep waters surrounding Easter Island are brimming with some of the densest populations of black corals on Earth, according to new research.

A team of scientists sent remotely operated vehicles to depths of up to 330 meters (1082 feet) and discovered more than 7,000 colonies of whip black corals, which are treasured for medicinal purposes by some cultures.

“These healthy coral gardens provide critical habitat for a wide variety of fishes and invertebrates, including species that are only found in this part of the world — like the strikingly colorful damselfish,” said Conservation International’s Daniel Wagner, a marine scientist and co-author of the study. “This new discovery highlights the importance of using advanced technologies to survey deeper portions of our ocean, which remain largely unexplored.” 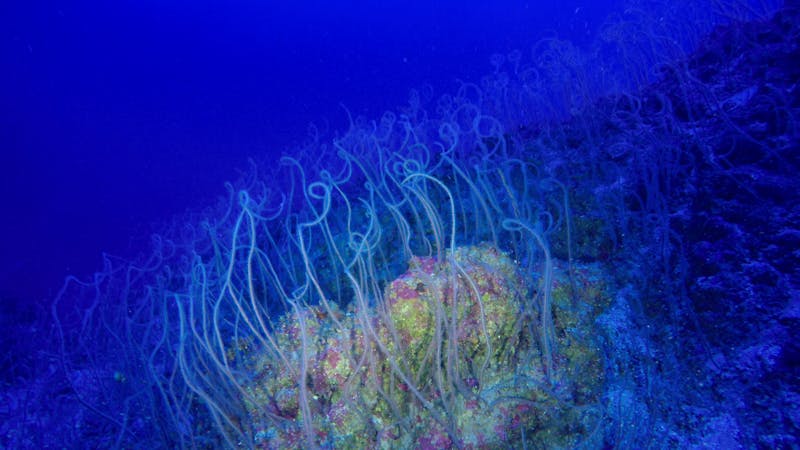 Black corals create critical habitat for an abundance of deep-sea life, such as fish and sea stars. However, these corals — and the numerous species that depend on them — face looming threats, Wagner says.

“Black corals are some of the longest living and slowest growing animals on Earth, which makes them extremely vulnerable to changes on the seafloor from destructive practices like deep-sea mining and bottom-trawling,” he said. “Our study indicates that similar coral gardens are likely widespread throughout the region and must be protected against these threats.”

Countries around the world are aiming to ramp up ocean protection to 30 percent by 2030.

But a recent study argues that effective marine conservation is impossible without the people who depend on oceans the most: Indigenous and local communities. However, conservation efforts often fall short on addressing the rights and priorities of these groups, the study’s authors found.

“When done right, ocean conservation can bring many benefits to local communities — from improving food security and livelihoods to protecting coastlines,” says Laure Katz, a Conservation International scientist and co-author of the paper.

“However, some initiatives can have unintended consequences. For example, designating large stretches of ocean ‘off-limits’ to try to protect them can harm Indigenous and local peoples who have relied on them for centuries.”

By analyzing environmental laws and policies, and using insights from local communities and conservationists around the world, the study’s authors developed a tool for advancing social equity in marine conservation — starting with recognizing Indigenous and local communities’ rights and knowledge.

This framework is already being used by the Blue Nature Alliance — a coalition of local governments, philanthropists and international organizations aiming to advance the conservation of 18 million square kilometers (7 million square miles) of ocean over the next five years.

“The framework seeks a balance between ocean protection and sustainable production that prioritizes benefits for communities with historical rights to an area,” Katz said.

“Countries must take three initial steps: ensure that Indigenous territories are formally recognized, allocate resources for grassroots conservation and secure a seat at the table for local communities in every decision made about their seas.”

This research was funded by the Blue Nature Alliance.

Conserving lands and sustainably managing ecosystems like forests and mangroves over the next 30 years could provide up to 30 percent of the greenhouse gas reductions needed to avoid climate catastrophe, according to a new study.

By analyzing the most recent data from dozens of scientific models, the study’s authors, including Conservation International’s Bronson Griscom and Jonah Busch, estimated the emission reductions that can be achieved using 20 different types of land-based conservation measures — including protecting a wide range of carbon-absorbing habitats — in more than 200 countries. Then, they factored in countries’ abilities to implement those actions, based on political, economic and social conditions.

“This study shows the wide-reaching impact of a range of measures that improve land stewardship to mitigate climate change, heal our ecosystems and support rural economies,” Griscom said. “Nature’s contribution to limiting global temperature rise below 1.5 degrees Celsius (2.7 degrees Fahrenheit) falls into three categories: protection, restoration and improved management. These are the pillars of natural climate solutions, and they are fundamental for the long-term health of our Earth.”

The greatest potential for these types of conservation and sustainable management actions is in developing countries, which often face intense pressure to exploit lands to meet economic needs, says Busch.

“This study underscores the importance of mobilizing resources and climate finance to support conservation in developing countries,” he said. “We now know how much potential every country has to mitigate climate change through land-based measures, but countries need to act to make it a reality.”

This research was supported by Paul M. Angell Foundation, Alan Eustace, and Tom and Currie Barron.