Costa Rica announced Friday that it will expand its protected ocean area from 2.7 percent to more than 30 percent of its territorial waters — a major leap that puts the Central American country nine years ahead of a global deadline to protect nearly a third of the world’s land and sea.

The expanded Cocos Island National Park and its surrounding marine protected area (MPA), off the country’s Pacific coast, will now cover over 5 million hectares (12.3 million acres) — a staggering 26 times larger than its previous size. In addition, the nearby Bicentennial Marine Management Area will expand to 11 times its previous size, now encompassing more than 100,000 square km (38,600 square miles) — roughly equivalent to the size of Iceland. 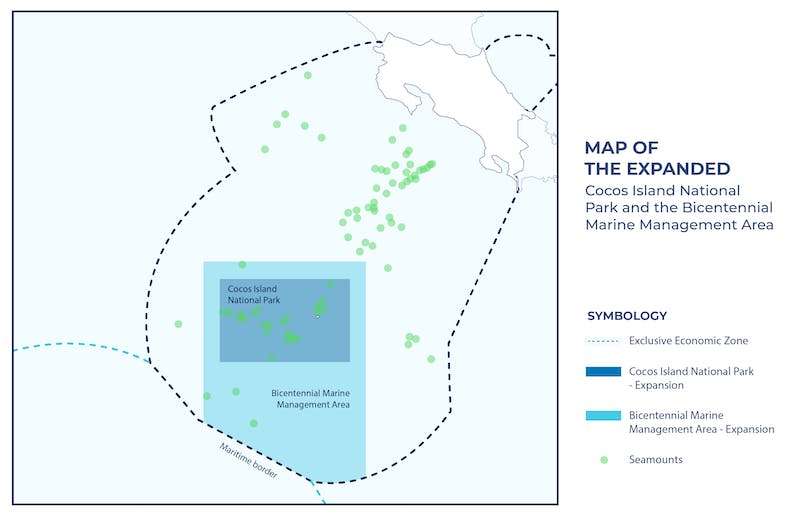 “At a time when it is critical to protect nature to avoid a biodiversity crisis, we are excited that over the past four years this collaboration has led to an expanded MPA that will benefit livelihoods and nature beyond our country,” said Ana Gloria Guzmán, executive director of Conservation International’s Costa Rica office.

“The environmental impact of this expansion will be profound,” she added. “Extending the reach of the surrounding Bicentennial Marine Management Area will help ensure safe passage for critical migratory marine species, many of which are endangered.”

Balancing sustainable production and protection, the Bicentennial Marine Management Area will allow regulated commercial fishing in some areas to support local economies, while a “no-take zone” will restrict human activities across underwater mountains that provide habitat for some of the largest populations of sharks on the planet.

The expansion of these protected areas contributes significantly to the global goal of protecting 30 percent of the world’s oceans by 2030 — which scientists say is necessary to limit the impacts of climate change and prevent widespread extinctions of marine species.

“Costa Rica has done what it does best: set an example that other nations should follow — while every ocean conservation effort is unique, the collaborative effort to work across government agencies, local fishing stakeholders and third-party NGOs can be a model used to secure other MPAs and move the global community closer to achieving the 30x30 goal,” Guzmán said.

The Cocos Island National Park expansion is part of the larger Eastern Tropical Pacific Marine Corridor, which connects protected ocean areas from Costa Rica and three other nations — Panama, Ecuador and Colombia — to form a “safe swimway” for species such as turtles and whales.

“Costa Rica has long been a conservation leader, a legacy which continues today,” Guzmán said.

“The efforts to support biodiversity and protect these species cannot stop here, but the Cocos expansion is a strong foundation on which to build."