An accidental ranger finds his calling

Editor’s note: For the next two weeks, Conservation International will publish stories from a new feature series, “South Africa side by side with nature.” In the series, we explore two South African landscapes where doing right by nature and doing right by people are the same. On World Ranger Day, here is a glimpse at part one of that series.

Mike Grover never intended to be an anti-poaching ranger. Taking a job at a private game reserve near Kruger National Park in South Africa, the young scientist assumed that his days would be filled with wildlife surveys and report writing. The only firearm he had ever needed was a large-gauge rifle, the standard for protection against dangerous animals in the field. He never expected he would have to defend himself against poachers as well.

“The poaching epidemic came as a wave,” Grover remembers. “I started hating what I was doing because I was running around with a rifle and a flak jacket to chase after poachers, which was not really something I wanted to do.” Uneasy with his new anti-poaching duties, Grover wondered if there wasn’t a better way to conserve wildlife. 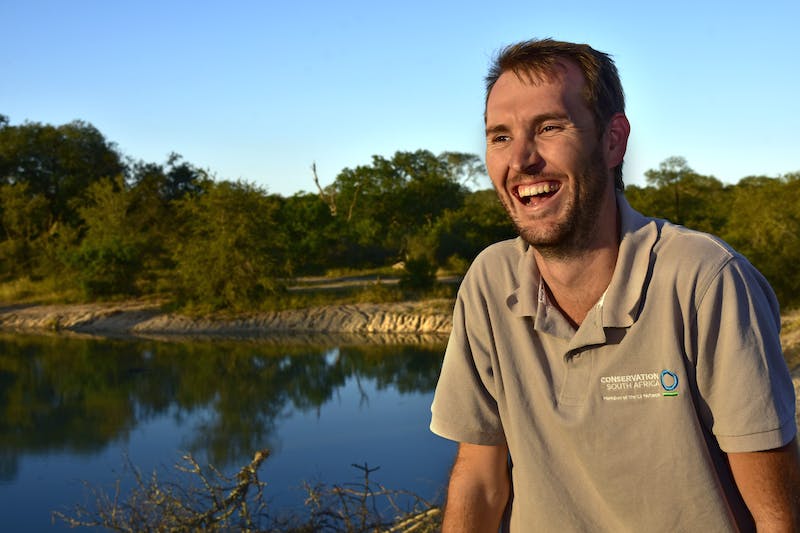 “When you work on your day to day life on the inside and you’ve seen the carcasses, you really get into the idea that anyone outside of the fence is there to cause harm. But when you have to engage with the people outside, you suddenly recognize that they are just like you. They are parents just trying to keep their family alive.”

Grover began talking to community members about poaching and what could be done to stop the onslaught. The answer was simple: Value what we have, and we will value what you have.

The realization drove Grover to get to know the communities surrounding the wildlife reserve — and led him in search of a solution that would benefit both people and wildlife.

Read part one: “Fenced out of nature.”

Jamey Anderson was a senior writer for Conservation International.