5 things you didn't know sharks do for you

Editor's Note: This post was updated on July 26, 2019. In honor of Shark Week 201, which kicks off July 28 on the Discovery Channel, we're sharing an updated version of one of our most popular shark blog posts.

It has always struck me as odd how terrified many people are of sharks. It’s one thing if you’re a surfer or fisher, but why would people living thousands of miles from the coast list the marine predators among their greatest fears, when statistically you are more likely to be killed by a toaster.

The annual success of "Shark Week" continues to show how fascinated and petrified we are of these creatures. If anything, sharks should be afraid of humans — many species of sharks are threatened by human activities, including overfishing and shark finning.

If sharks were to disappear, it would be bad news for all of us. Here are just a few of the reasons why.

Many shark species are "apex predators," meaning they reside at the top of the food web. These sharks keep populations of their prey in check, weeding out the weak and sick animals to keep the overall population healthy. Their disappearance can set off a chain reaction throughout the ocean — and even impact people on shore.

For example, a study in Australia found that as shark numbers declined, mid-level predators like snappers increased while herbivorous fish populations shrank. With fewer algae-eating fish around, the algae overwhelmed the reef system and limited its ability to bounce back from bleaching and other disturbances.

2. Sharks could hold cures for diseases.

It has puzzled researchers for years: Why don’t sharks get sick as often as other species? Shark tissue appears to have anticoagulant and antibacterial properties. Scientists are studying it in hopes of finding treatments for a number of medical conditions, including viruses and cystic fibrosis .

Copying sharks could even lead to significant global health impacts. Each year, more than 2 million hospital patients in the U.S. suffer from healthcare-acquired infections due to unsanitary conditions. Looking to shark skin’s unique antimicrobial properties, researchers were able to create an antibacterial surface-coating called Sharklet AF. This surface technology can ward off a range of infectious bacteria and help stop the proliferation of superbugs in hospitals. 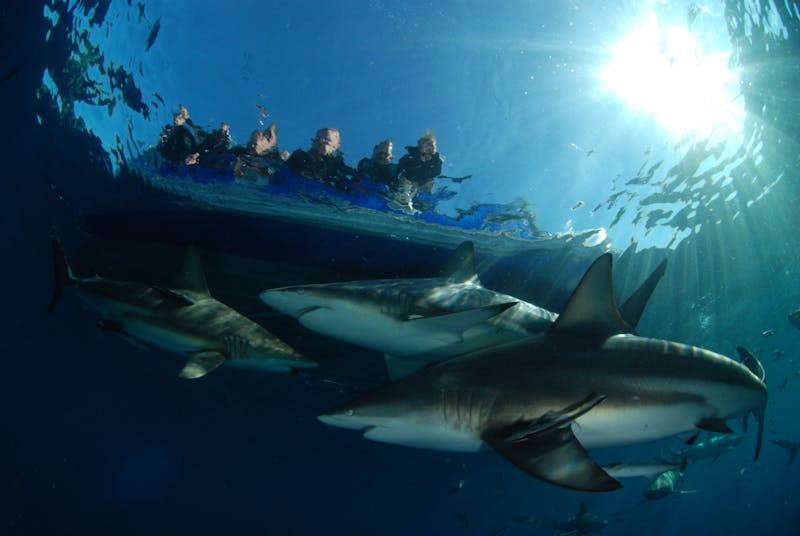 Snorkelers in South Africa peer into the water as they prepare to swim with sharks for the first time. (© Sijmon de Waal/Marine Photobank)

Carbon is a critical element in the cycle of life — and a contributor to climate change. By feeding on dead matter that collects on the seafloor, scavengers such as deep-sea sharks, hagfish and starfish help to move carbon through the ocean.

In addition, research has found that large marine animals such as whales and sharks sequester comparatively large amounts of carbon in their bodies. When they die naturally, they sink to the seafloor, where they are eaten by scavengers. However, when they are hunted by humans, they are removed from the ocean, disrupting the ocean's carbon cycle.

People have been practicing biomimicry — imitating nature’s designs to solve human problems — for many years. However, recent advances in technology have made it possible to go even further in pursuit of efficient design. Great white sharks can swim at speeds up to 25 miles per hour, mainly because of small scales on their skin called “denticles ” that decrease drag and turbulence. Envious professional swimmers and innovative scientists mimicked the design of these denticles to develop a shark-inspired swimsuit, proven to make swimmers sleeker and less resistant in the water.

An Australian company called BioPower Systems even designed a device resembling a shark’s tail to capture wave energy from the ocean and convert it into electric power. As the world looks for clean energy alternatives to fossil fuels, this kind of technology could be one promising solution.

Over the last several decades, public fascination with sharks has developed into a thriving ecotourism industry in places such as the Bahamas, South Africa and the Galápagos Islands.

According to a study published in 2013, shark tourism generates more than US$ 300 million a year and is predicted to more than double in the next 20 years. In Australia, shark diving tourism contributes more than US$17.7 million annually to the regional economy. These activities support local businesses (boat rental and diving companies, for example) and provide more than 10,000 jobs in 29 countries. Several studies have indicated that in these places, sharks are worth much more alive than dead.

In addition to these benefits for people, it’s likely that sharks fulfill other roles in their habitats that we have yet to understand or appreciate.

Species are sometimes called the “building blocks of ecosystems,” yet humans continue to remove these blocks without fully understanding the consequences. Up to 100 million sharks are killed every year, a figure that hasn’t improved since 2013.

Think of the world’s biodiversity as a giant game of Jenga: if you keep removing blocks, eventually the whole thing will come tumbling down.

Molly Bergen was formerly the managing editor of the Conservation International blog.