The Succulent Karoo has a new type of shepherd in town, the Eco-Ranger, a super herder who combines ancient traditional stock herding techniques with that of cutting edge technology to minimise stock loss to predators and prevent overgrazing or trampling of limited grazing lands.

CSA has placed eleven of these new herders with both communal and private farmers who, in some cases, had suffered stock losses of 50% and more due to predators. 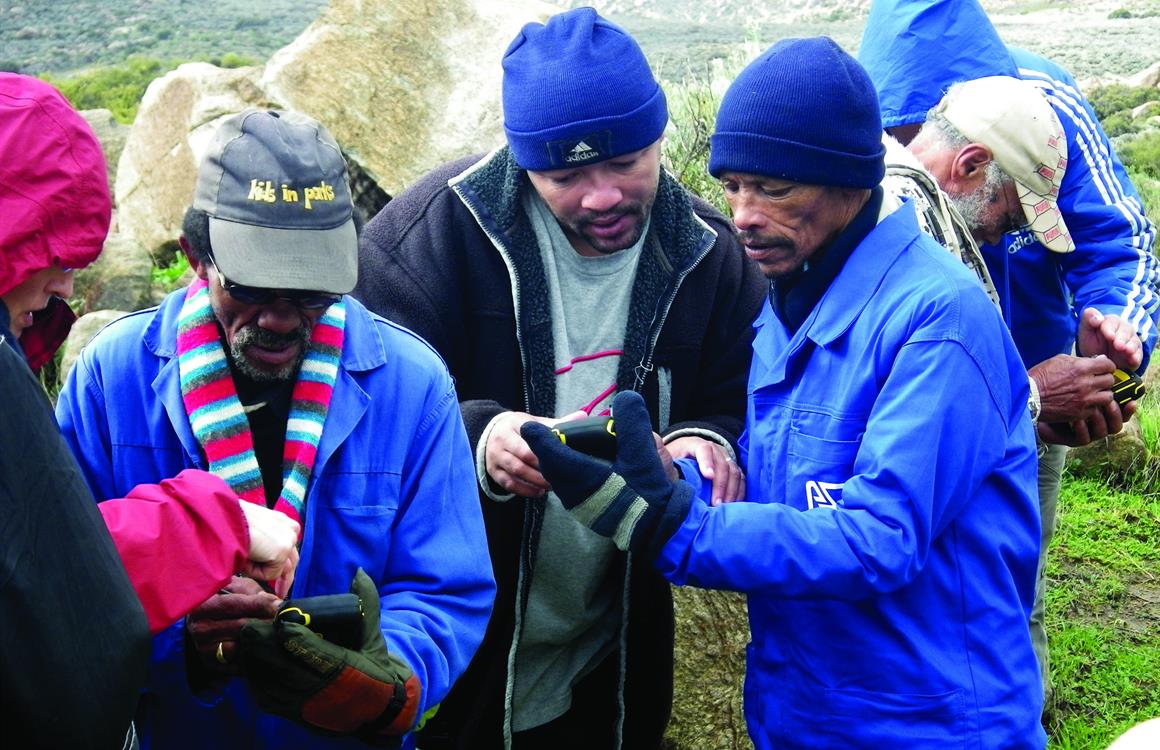 Fifty years ago if you were to look in the goatskin backpack of the Namaqualand Shepherd you would find coffee, a knife, a tin mug and plate, some salt and flour and their tipple of choice. Now if you dig a little deeper you will also find a state of the art handheld GPS unit called a Cybertracker. Conservation South Africa (CSA) and a group of scientists has walked side by side with these herders to provide them with the hands on training they need to learn how to use this new technology. Shepherds are now fully trained to look for and record the various signs from nature that help paint a clear picture for managing their farms.

Historically, herders would stay in the field for weeks on end, hunting their food and in some cases farmers would send runners with fresh provisions. Shepherds stayed with their flocks to guard against predators, move them on to better pastures and allow other areas to rest. As much emphasis was placed on stock condition as on managing veld (field) conditions.

When the socio-political situation in South Africa changed with European colonists settling and quickly spreading over the landscape, it brought far reaching changes. Indigenous people were displaced and forced onto marginal grazing lands and shepherds could no longer follow the nomadic lifestyle. Commercial farming changed the way stock was managed, the paddock system made herders redundant and predators were actively hunted and killed indiscriminately with firearms, gin traps, and poison. This led to a severe disruption in the eco-system, with large areas being stripped of their apex predators, allowing herbivore prey animals such as rock hyrax to flourish and often strip large areas bare of vegetation.

Today many of the large predators like lion and leopard are completely absent from their ancient hunting grounds or are threatened with extinction. Indiscriminate predator control often leads to mass graves of non-target, harmless animals like eagles, small buck, tortoises and hares, disturbing the natural balance of the ecosystem. Stock losses in South Africa are estimated at R1 billion annually so finding a win-win solution for farmers and nature was the motivation behind setting up a pilot project to manage the human- wildlife conflict and ecosystems in a way that creates cost effective employment opportunities for people in the area. Farmers have tested combinations of complimentary tools to the GPS units that include the use of Anatolian sheep dogs to guard against predators and a new type of protective collar that in its first six months of use has seen a 100% reduction in stock loses on a farm that previously used big iron gin traps and poison as predator control methods.

A study carried out by scientists shows farmers who use Eco-Rangers experience a 320% less stock losses. smaller, showing clearly how this new management method benefit people and nature and reduce ecological disasters within an industry that has by far the largest ecological footprint in Namaqualand. In 2012 the CSA team will triple the expanse of this initiative to 60,000 hectares from the Kamiesberg Mountains to the banks of the Orange River near the South Africa and Namibia border.