ABOVE: A female sea turtle makes her way back to the ocean after laying eggs.

(This is CI Samoa's twentieth article published by the Samoa Observer.)

Did you know that turtles belong to one of the oldest reptile groups in the world? Did you also know marine turtles actually swam with the dinosaurs millions of years ago?

There are seven species of marine turtles in the world, and most of them are classified as endangered or critically endangered on the International Union Conservation of Nature’s (IUCN) Red list.

Turtles have been around for quite some time, but the one burning question left after reading such facts is; are human activities really that impactful that even a species as old as turtles have been classified as endangered?

According to one of the world’s leading conservation organizations, World Wildlife Fund (WWF), “Human activities have tipped the scales against the survival of these ancient warriors (turtles). Nearly all species of sea turtle are classified as endangered. Slaughtered for their eggs, meat, skin and shells, sea turtles suffer from poaching and over-exploitation.”

Known for their gentle, shy, and harmless characteristics, turtles continue to face a number of threats and impacts – with human activities being some the greatest ones. In addition to the direct threats mentioned above, indirect impacts on their health and populations include climate change, dredging and marine pollution.

All this is disastrous for a species that are slow growers, in which it can take up to 20-30 years for a turtle to reach sexual maturity. They can live as long as 100 years however given that only 1 in 1000 hatchlings survive into adulthood, this is a high mortality rate.

What about here in Samoa? How are our turtles doing in our local waters?

In discussions with CI Pacific Marine Program Director, Schannel van Dijken, he explained that in Samoa, three species of marine turtles have been recorded — the most common being the Hawksbill (Eretmochelys imbricate) and Green turtle (Chelonia mydas), with a few specimens of leatherback turtles (Dermochelys coriacea) – entangled in long-line fishing gears. It’s known that the Hawksbill turtle is the only species to nest in Samoa, whilst the Green turtle only feeds in our waters.

“These species are essential links in our marine ecosystems assisting to maintain the health of critical habitats such as sea-grass beds and coral reefs – which are also fundamental to commercial species of interest such fish, lobsters, shrimps and tuna,” he said.

“To have this species under threat and endangered is an issue for human wellbeing. Not only for nature’s health’s sake, but culturally and economically, for us Islanders to thrive, we need turtles to thrive.”

Turtles have major cultural significance and tourism value, which are also of huge importance in our region.

In Samoan culture they are also known as ‘I’a Sa’ or sacred fish. There are many Samoan myths legends and songs which feature turtles such as “The Legend of the Turtle and the Shark.”

In the past, turtles were only allowed to be consumed by the high chiefs of the village. However, this changed over time and anybody who could catch a turtle, was able to eat one. This became a problem because it meant more turtles were harvested and it had a huge impact on turtle populations in Samoa.

In the 1980s to 1990s, it was common to see turtles of all sizes being sold either live or dead along with their eggs in the fish market – according to reports from the time. Because of its market value it also drove the hunting of turtles in Samoa for both its meat and its shell which was also used for handicrafts such as combs.

The Fisheries Regulation 1996 put a limit on the size of the turtles caught and sold in the market. In 2005, Samoa signed the Convention on International Trade of Endangered Species of Wild Fauna and Flora (CITES), a Convention which bans the ‘trade’ of species endangered because of trade.

Marine turtles are on Appendix I and it means the import/export of the species or its products will only be allowed under exceptional circumstances such as research but requires a CITES permit. By 2009 the Marine Wildlife Protection Regulation 2009 was enforced by the Ministry of Natural Resources and Environment (MNRE) and it banned the sale, capture, injure, or killing of turtles in Samoa. Because of the regulations, the number of turtles being sold at the fish market dropped, and potentially the rate of harvest. 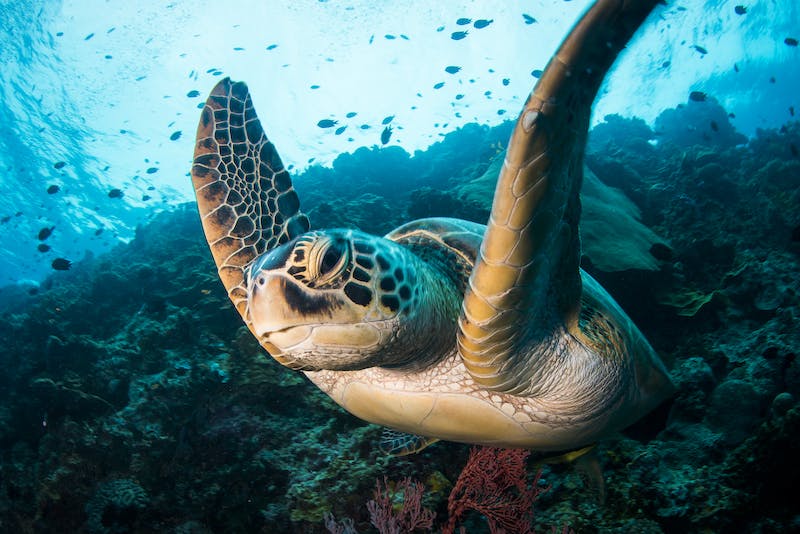 However, there were rare occasions in recent times where turtles were sold illegally, often on the roadside and members of the public reported it to relevant authorities.

“In the lead up to Christmas, we are likely to see an increase of turtles captured to sell for their meat and shell,” explained Juney Ward in a web-article published by the Secretariat of the Pacific Regional Environment Programme (SPREP), where the sale of a live turtle was halted by officials from the Ministry of Natural Resources and Environment (MNRE) and SPREP. The turtle was tagged and released back into the ocean.

She continued on to say “It’s important that people understand that under the Marine Wildlife Protection Regulation 2009 and Fisheries Regulation 1996, it is illegal in Samoa to sell, catch, injure, or kill turtles. It is also written in the law that if you witness any such activity you must report it as soon as possible.”

Apart from the impacts of turtle harvest in Samoa, coastal development is also an issue.

If you drive around the coastal roads around islands, you’ll notice almost every beach has a seawall or hotel. These developments either disturb and/or destroy the turtle nesting beaches.

Some of the main nesting sites such as the Aleipata Islands and Falealupo still exist but are highly threatened by both natural and made-made activities. Even if we stopped hunting for turtles, they still need to breed and they do this on our beaches.

A recent turtle nesting survey at Falealupo Tai conducted by the Division of Environment and Conservation of MNRE for the critically endangered hawksbill turtle recorded sand mining and turtle and egg harvest as the main threats. Predation on young hatchlings by many crab species on the beaches was also prominent.

Although the conservation efforts in Samoa are not one hundred percent perfect yet, Samoa has come a long way to help protect marine turtles.

There’s still more to be done and efforts are still continuing to ensure the turtle populations in Samoa fully recover.

At the global level, marine debris mainly plastic litter, is fast becoming one of the main concerns for turtles. Despite major illustrations by conservation groups on the issue, not enough has been done about the issue.

The plastic we discard thoughtlessly often ends up in the ocean and then turtles either consume it (a plastic bag easily being mistaken as a jelly fish — popular turtle food), causing it to choke to death or they are strangled and anchored by litter causing it to drown (e.g. discarded fishing gear) — a very sad and agonising death for such a gentle creature. Though this does not only affect turtles — it affects all other marine life as well.

But amidst all these human-induced problems faced by turtles, there’s still good news.

The New York Times reported that according to a comprehensive analysis of global sea turtle abundance published in Science Advances, conservation groups have seen some great successes around the world with “most populations of sea turtles bouncing back after historical declines.”

It’s important to keep in mind, if we want our future generations to continue to see turtles gracing our oceans, then we need to all work together to protect our turtles.

Government and Non-Government Organisations in Samoa recognises the biological, cultural and economic value of turtles and reminds us that in Samoan law there are serious penalties towards people found involved in illegal turtle activities such as capturing, selling, or injuring Samoa’s sea turtles or those involved in other illegal activities impacting turtles such as illegal sand mining operations. If you see any of these illegal activities then please contact Fisheries Division – 22561, MNRE – 67200, or SPREP – 21929. Let’s all do our part to help keep turtles alive and thriving, helping ourselves thrive in the process.