(This is CI Samoa's twenty-first (21) article published by the Samoa Observer.)

Creeping around the house, getting into and contaminating stored food, spreading various diseases, gnawing at anything and everything they can find, and just overall being a pest — most people can agree that rats can be a real nuisance.

But what many do not know is that, aside from being a nuisance to people directly within households, rats also impact the environment greatly.

According to CI Samoa Director Schannel van Dijken, “the insidious effects of rats to people are not only direct, but their huge impact on the environment in turn and indirectly further impacts human health, wellbeing and economy, especially on islands.”

“We need people to really start thinking how destructive these pests are to our general human wellbeing. In Samoa, we have three species of invasive rats that have all been brought here in the past by humans. They are known as the Pacific rat (little rat, Rattus exulans), ship rat (black rat - Rattus rattus) and Norway rat (brown rat or Rattus norvegicus). These different species and the subtle different environments they occupy, are all destructive animals to our environment, our health and our economy.

“Pacific, brown and black rats that spread by vessels into the Pacific over the millennia have single-handedly driven more bird species to extinction than in any other region in the world, and in Asia, they consume food crops that could feed 200 million people for an entire year! What’s also concerning is that often their control comes too late, is inefficient, or is considered too expensive”

“We hope this article will help wake up our people as we all can make a difference.”

The Centre for Agriculture and Bioscience International (CABI — not-for-profit inter-governmental development and information organisation focusing on agricultural and environmental issues in the developing world) reported that “around the world, the Rattus Norvegicus (common brown rat in Samoa) caused or contributed to the extinction or range reduction of native mammals, birds, reptiles and invertebrates through predation and competition. It restricts the regeneration of many plant species by eating seeds and seedlings, eats food crops and spoils human food stored by urinating and defecating in them”.

What this means is that their presence threatens ecosystems and human livelihoods greatly. The Secretariat of the Pacific Regional Environment Programme’s (SPREP) Invasive Species Advisor, David Moverley, explains in more detail just how much of a threat they really are.

“Rats impact Samoa (and other Pacific Islands) in so many ways,” he explains.

“Forests are impacted because rats eat just about everything including birds, eggs, seedlings, fruits, and insects. This results in plants and animals going extinct and weakens the forest so it is more difficult to regenerate – particularly following natural disasters and makes it easier for other invasive plants to spread. Weak forests also contribute to flooding and sedimentation of the coastal environment and coral reefs.

“Coral reefs and the coastal marine area are impacted by rats by disrupting the processes that keeps coral reefs thriving. Rats prey on seabirds, reducing the population to low levels. The seabirds are necessary for coral reef health. Studies have shown large differences in the amounts of nitrogen and phosphorus in waters, algae and fish adjoining rat-free islands compared to rat-infested islands. Studies have shown an increase of 48 per cent in total reef fish biomass adjacent to rat-free islands.

“Food Security is impacted by rats because Pacific people basically have to grow extra food to allow for the food that the rats will eat. Damage to coconuts has been recorded at up to 70 per cent in Tokelau and damage to fruit trees in Palau of over 50 per cent.

“Health is impacted by rats through the spread of deadly diseases such as leptospirosis of which there is a high incidence in the Pacific. Leptospirosis is a “climate sensitive” disease because it spreads after flooding through flood waters contaminated with rat urine and faeces. Rat populations also raise the amount of food for disease spreading mosquitos increasing the risk of dengue fever, chikungunya and zika virus.”

And although rats do not originate from Samoa, studies suggest that migration activities in the past introduced these pests to Samoa’s islands with the earliest reports of rats in Samoa dating back to the early 1760s.

“There are 3 species of rats in Samoa — as in most of the Pacific,” explains Mr. Moverley.

“The three species of rats in Samoa have different habits, and parts of the environment they like to live in, they all are destructive animals to our environment and the methods for controlling them are the same.” 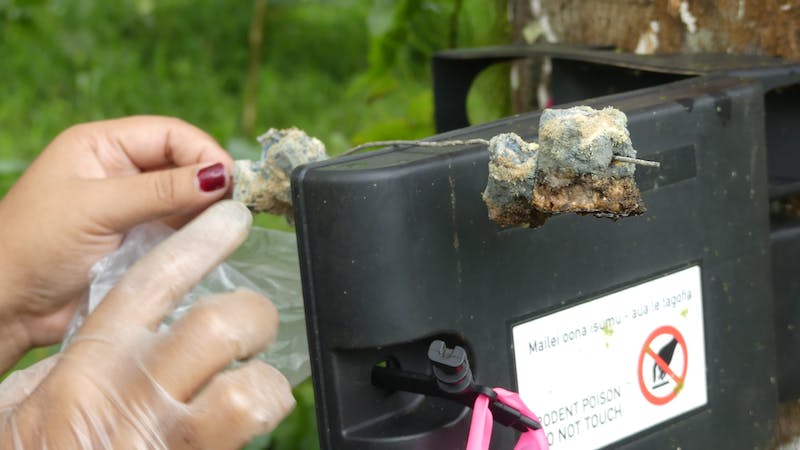 A volunteer baits a rat trap.

Throughout the years, through efforts of the Ministry of Natural Resources and Environment’s Division of Environment and Conservation (MNRE – DEC), Samoa Conservation Society (SCS), SPREP, CI and various other offices, Samoa has made great strides in controlling our local rat infestation, but more work is always needed.

One of Samoa’s rodent control methods, which is currently employed by SCS and MNRE-DEC to help control the rat infestation in areas such as the Malololelei reserve, is through baited rat trap stations.

With hundreds of rat trap stations placed around the reserve, bait infused with rat poison is placed in each station to lure and poison the rats roaming the area.

According to CI Samoa’s Environmental Science Intern, Gloria Roma, who assisted with Samoa’s latest baited rat trap station monitoring two weeks ago, she explains that the efforts by MNRE-DEC in controlling the rat infestation is both effective and necessary.

“Being a part of the monitoring taught me so much,” she began.  “I learned from MNRE staff that when they first started with the rat bait initiative, there were very few native birds in the area — which was identified and confirmed through scientific bird surveys.

“But once the rat bait stations were placed, they noticed the following year that there were more native bird calls which signified an improvement in their population which means the work is successful in controlling impacts of rats in the area.

According to rat eradication studies of Nu’utele and Nu’ulua islands of Aleipata, Samoa (back in 2011), our small island nation also utilised helicopter time for aerial dispersal of rat bait.

The operation aimed to restore the biodiversity of the two islands as it was identified as a priority for biodiversity conservation in Samoa – the report stated that “rats were known to be responsible for a lot of the environmental degradations faced by the islands.  When Pacific rats were removed from islands in New Zealand, there were huge benefits for vegetation, populations of seabirds, reptiles, and invertebrates.”

So, we can all agree that rats are not welcome on our island and as environmental ministries and various organisations focus on rat eradication on the macro level, the public can also do their part with home remedies found online to keep rats out of our households, farms, and lives.

“It is a great investment for increasing the resilience of both land and coastal ecosystems and their people and is an excellent tool for adapting to climate change and preparing for natural disasters.”